And he had a feeling he saw one before Friday’s MHSAA Team Final at Rockford High School.

The calm. The energy to compete. The singing.

The gymnastics championship meet often comes down to the smallest of margins, and this time the top three teams were separated by a mere three tenths of a point.

Farmington United was just a few tenths better than the rest, scoring 144.750 to edge Northville and Rockford for a first MHSAA title in this sport since 2006.

“We are such a team, and we are so strong together,” Farmington United senior Elisa Bills said. “No matter what other teams are doing, no matter what high score we see, we forget about it and keep going and continue to the next event.

“It didn’t matter if someone fell or hit. It didn’t matter, because as a team, we were happy. And we just put everything out there and did our best.” 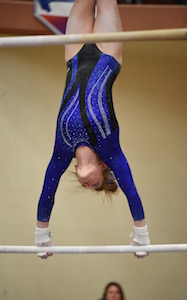 Farmington United – made up this season of athletes from Farmington and North Farmington – was followed by Northville at 144.550 and Rockford at 144.450. Northville’s finish was its highest since coming in runner-up as part of a co-op team with Novi in 2002. Rockford’s finish similarly was impressive – the Rams were competing for their fourth straight MHSAA Finals championship, but doing so without a senior and with only three juniors taking the mat.

Farmington United had a bit more experience, starting with Bills, the reigning Division 2 individual champion who will compete for a repeat title Saturday. One of two seniors on her team, Bills posted the highest all-around score of Friday’s competition, 36.700. Junior Kacey Noseworthy had the day’s fourth-highest all-around at 36.450, and senior Emily Stecevic also came up big with a 34.950.

As a team, Farmington United didn’t place first on any of the four apparatus – but came in second on bars, beam and floor. Juniors Shelby Smith and Ava Farquhar, sophomore Lily Tyler and freshman Sydney Schultz also contributed scores.

“This just kinda floored me because these are not easy to win. I don’t even know if they know what they just did,” said Dwyer, who has led the program since 1986 and guided it to three straight titles from 2004-06 and runner-up finishes in 2008 and 2010.

“There’s teams – like I was looking at them at Regionals and earlier today – I didn’t have to do a lot of coaching. They were the ones with game faces on, so I felt good about that. Some years you’ve gotta just get them on – ‘Hey we’re at the state meet, at the Regional meet’ – and I told them before this meet, if I had to bet on a team to have a chance to win it, I’m going to bet with you guys.”

That might not have seemed like the best idea even a few weeks ago. Bills missed much of the second half of the regular season with a knee injury and didn’t return full strength until the Regional a week ago.

Her teammates picked up the slack, including finishing first Jan. 31 at the Canton Invitational without her against a field including many of the state’s top teams.

Coming back from the injury admittedly was the “scariest thing ever” for Bills. But there’s no way she would’ve missed this. “Coming back and winning this title was the best thing – all I wanted to do,” she said.

Meanwhile, there was little disappointment as Northville gymnasts took photos with their runner-up trophy Friday night. The Mustangs had improved from ninth in 2017, and cut the margin against Farmington significantly after finishing nearly four points behind Bills and her teammates at last week’s Regional.

Senior Erin McCallum and sophomore Maria Scavnicky competed all-around, posting scores of 36.550 and 35.325, respectively. As a team, Northville posted the highest scores on both bars and beam. 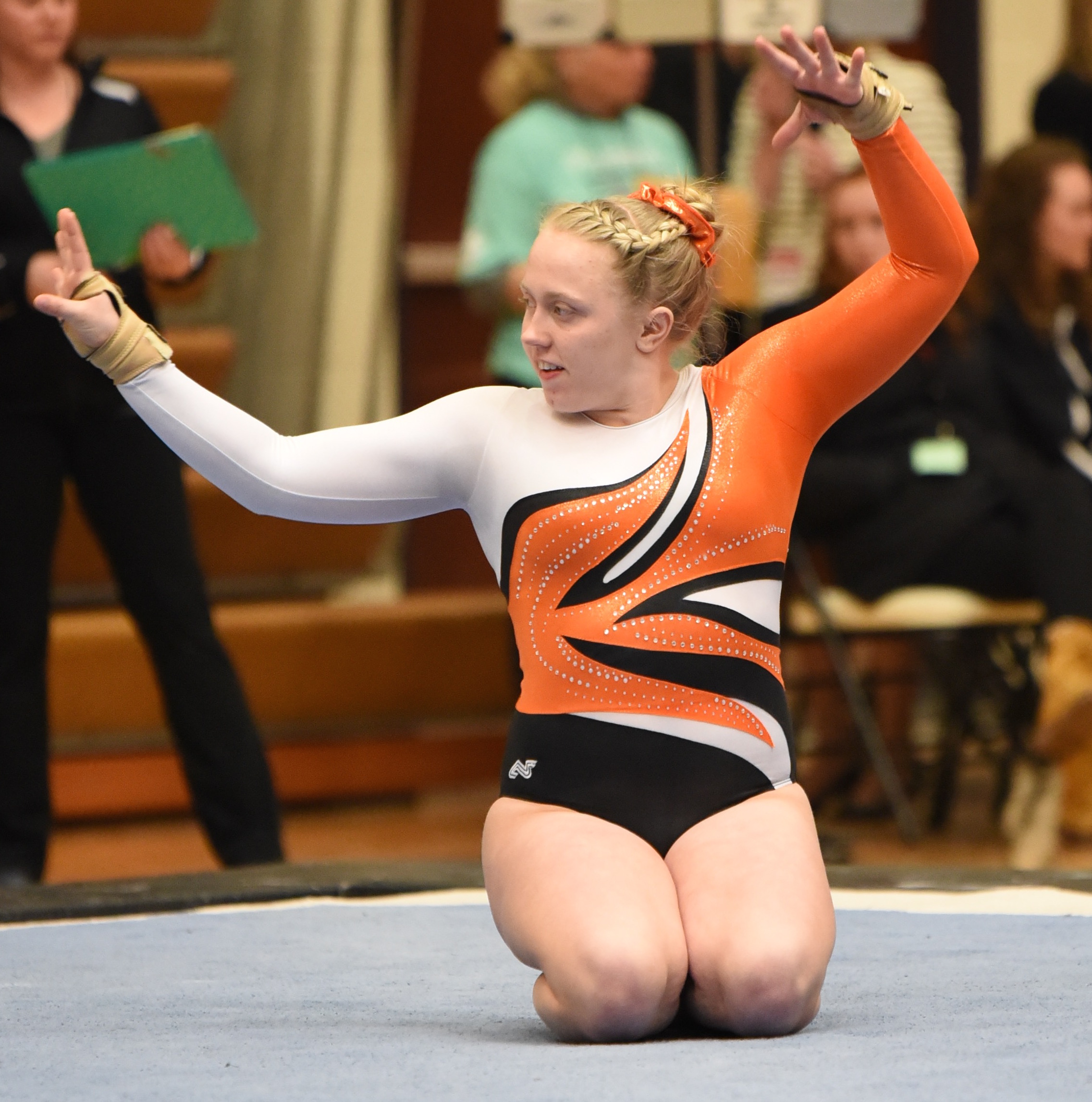 “Since the very beginning, this is what we’ve wanted to do,” said McCallum, whose all-around score was the day’s third highest. “Even if things didn’t go our way, we just kept pushing.

Rockford finished first as a team on floor, and Brighton was first on beam. Livonia Blue, Brighton, Plymouth and Howell all cleared 140 points to follow the top three in that order, respectively.

Individual competition in both divisions begins at noon Saturday at Rockford.