EAST LANSING – As soon as he saw the signal to intentionally walk teammate Davis Graham, Grosse Pointe South first baseman Anthony Dermanulian knew he had to buckle down and come through for his team.

With the bases loaded and the MHSAA Division 1 championship game against Brownstown Woodhaven tied 1-1 in the bottom of the third inning, Dermanulian came through in the clutch, drilling a bases-clearing double that gave his team the lead and clear momentum.

“I feel like it was disrespecting me,” said Dermanulian, smiling. “He was assuming I was going to be an easy out. So I stared him down because I knew I was going to kill the ball. That’s what I was thinking, that I was going to get a hit.”

The hit proved to be the difference-maker in South’s 8-1 victory, which gave the Blue Devils – unranked heading into the postseason – their first MHSAA baseball championship since 2001.

“It was the right thing to do,” South coach Dan Griesbaum said of the intentional walk to Graham. “Graham’s our best hitter, second and third base (occupied), first base open. It was the best thing to do. You had to walk him and let someone else beat you. (Dermanulian) just put a hurt on one. That was the key in the game, right there.”

The three-run cushion was more than enough for South starter Cameron Shook, who went the distance on the mound, scattering seven hits over seven innings while allowing just one earned running and striking out five. Shook, who missed some time this season with a leg injury, came up big in his team’s Quarterfinal victory over Macomb Dakota and again on Saturday.

“It’s been more magical than anything I could ever ask for,” said Shook, who will play college football for Navy in the fall. “We did this, together. There’s no me, there’s no singular person. We as a team accomplished what everyone thought was impossible for us to do.” 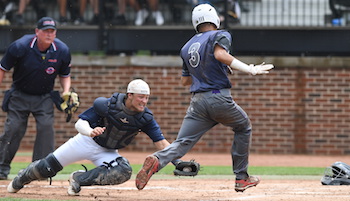 South added a pair of runs in both the fourth and sixth innings to ease to the victory. The Blue Devils used a little small ball to score a pair in the fourth. After sophomore Cameron Mallegg reached on an error to begin the inning, senior Conor McKenna had a bunt single. Both moved up a base on senior Steven Cavera’s sacrifice bunt. Mallegg scored on a passed ball and McKenna crossed the plate courtesy of a squeeze bunt by senior Giovanny Lutfy to make it 6-1.

Consecutive hits by McKenna, Cavera and Lutfy, followed by a hit by pitch (of senior Joseph Naporano) and a sacrifice fly by Graham capped off South’s scoring in the sixth.

Woodhaven scored its lone run in the top of the first inning, on a home run by Colin Czajkowski. The junior finished 2 for 3 in the game and also took the loss on the mound after allowing eight runs (but just two earned) in five innings. Senior Alonzo Chavez was 3 for 3 in his team’s loss.

The Warriors (34-6) finished up a historic season on the diamond, having captured the school’s first-ever Regional championship and trip to the Semifinals.

“I’m very proud of (the team), the effort they put into it, the ride they took us all on; it’s been amazing,” Woodhaven coach Corey Farner said. “I told them, win or lose, I’m going to love them no matter what. Some of the bounces didn’t go our way. We didn’t play particularly well, so we didn’t deserve to win today.”

Griesbaum said his team’s playoff run was as impressive as he’s seen in his 35 years on the Blue Devils’ bench.

“We’ve had eight trips to the final four, this was our second title, we were runner-up once,” Griesbaum said, “but I’ve never seen a group play with more confidence than this one.
“Never.”