EAST LANSING – Don’t get Beal City senior Brett Upton wrong. He wants all the attention on himself – in the biggest of moments.

But he’s the first to deflect the credit to his teammates.

He deserved the lion’s share of the credit. No one could dispute that.

“It’s awesome. I embraced it. I feed off stuff like that,” said Upton, who struck out eight while walking just a pair. “I love big games, I love being the guy in situations like that. All the credit to my teammates, though, making me look a lot better than I really am. That’s for sure.”

“I’m so happy for these kids,” Beal City coach Steve Pickens said. “This is what baseball is all about. When I see my kids do well, it’s like you put a dollar in and two dollars come out.

“They’ve been dedicated all year, and they work hard and that’s paid off.”

Beal City scored the game’s first run in the bottom of the fourth inning. Senior Kollin Sharrar reached on a bunt single and scored on an RBI double by junior Keegan Haynes. The Aggies added another run in the fifth inning on an RBI single by junior Colby Berryhill, scoring Lucas Schumacher.

But the Aggies broke the game open – and closed it out – with eight runs in the bottom of the sixth inning. Haynes and freshman Cameron Lynch each singled to center to get things rolling for their team. After junior Nate Wilson was intentionally walked to load the bases, senior Aaron Schafer drove in a pair to make it 4-0.

That was just the beginning for Beal City. One batter later, with the bases loaded, Berryhill drove in two more with a double. Upton then had a double of his own, scoring senior Lucas Schumacher to give his team a 7-0 lead. Haynes’ RBI single made it 9-0, and Wilson closed things out with an RBI single. 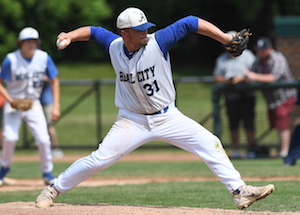 “I can’t even describe it right now. Four years, four years it took us to get here,” Upton said. “To finally finish it, oh my God. All the hours we’ve put in all winter, this senior corps as a group. It’s all paid off. We won our last high school game ever, can’t ask for anything more than that.”

Haynes finished 3 for 4 scoring twice and driving in a pair for Beal City (23-8). Schumacher also had three hits, scoring twice, while Berryhill finished with two hits and three RBI.

Pickens, in just his second year as head coach of the Aggies, spoke about the state of the baseball program in Beal City.

“The kids want to play baseball out there. That’s half the battle, getting them to play,” Pickens said. “I don’t have to do that, so now I can start at 202 instead of 101. By the time we get to the state tournament, here we are.”

“When you get beat, you get beat. At the end of the day, it’s going to sting but you can live with that knowing you got beat by a good team. They’re a great team,” USA coach Tyler Bader said. “They pitched well, they defended well, they bunted well. I think we could have done some other things that would have made it a little tougher (for them). Anytime you get just one hit, it’s tough to win a game.”

Despite the loss, Bader said he was proud of his team.

“When you get this far into the tournament, you know the team in that other dugout is no slouch. We just couldn’t take advantage of our opportunities when we had guys in scoring position, to put a little pressure on them,” Bader said. “I told them before we went up on stage (to receive the runner-up trophy), ‘I know we’re bummed, we’re mad, but try and enjoy this because in a couple days we’re going to look back on this moment.’

“I know there are a lot of other schools and players out there that would love to swap places with us and be the loser in the state championship game.”

VIDEO: Maybe the defensive play of the weekend was this diving catch by Beal City's Colby Berryhill in the sixth inning of the Division 4 Baseball Final against Unionville-Sebewaing.