EAST LANSING – It may have taken six-plus innings, but Kalamazoo Christian coach Kevin Lewis eventually had a chance to take it all in Friday morning.

And he had an opportunity to exhale as well.

All it took was a three-run home run from senior Jayme Koning, a shot which served as an explanation point on the Comets’ 6-1 victory over Coleman in a Division 4 Semifinal at Secchia Stadium.

“It was very relaxing after that sixth inning. It was then I knew,” said Lewis, referring to a four-run sixth that gave his team a five-run cushion. “(Koning) was hot all day. When she came up to the plate, I had that gut feeling, like, ‘If she drops a bomb right here, it’s done.’ And she did it. That’s not the first time. She did it against (Stevensville) Lakeshore. When you’re facing teams like that, for her to come up clutch in two situations like that shows me what kind of ballplayer she really is.”

Koning was 3-for-4 in the game, reaching base on all four of her plate appearances. She also had a double and an RBI single which tied the game at 1-1 in the first inning. Her home run was her 14th of the season. She went the distance on the mound, allowing just four hits while striking out four, including the last Coleman batter of the game – setting off a grand celebration for her team.

“Both (the home run and game-ending strikeout) were different excitements,” Koning said, answering which was more special to her. “The home run gave us a little insurance that I really like, and getting that out is just in-the-moment awesome.”

The game was extremely tight through five innings, the difference coming on an RBI single by freshman Faith Kline – scoring courtesy runner Nyla de Jong – which gave her team a 2-1 lead. To that point both Koning and Coleman starting pitcher Jaden Berthume were cruising along.

“Defense is obviously the name of the game,” Lewis said. “We have a really good defense. We have freshmen in the lineup. We’ve got sophomores in the lineup. We’re deep all the way up through. It came down to defense and our pitching on the mound. Jayme held them tight, and we got the job done.”

Senior Sydney Duong was 3-for-3 with a walk for Christian (31-8), and scored a pair of runs. Sophomore Zoe Hazelhoff collected a pair of hits and junior Megan Snook had an RBI single and scored a run for the Comets, who will face Unionville-Sebewaing in Saturday’s championship game.

Berthume and freshman Katelyn Pnacek each had two hits for Coleman (35-8), which entered the postseason ranked No. 1 in Division 4. It was the Comets’ third straight trip to East Lansing. Last year they fell to Centreville in the championship game.

“When we’ve got chances to score, we’ve got to be able to get the hit,” Coleman head coach Chad Klopf said after the game. “We’ve been doing that all year. We’ve been able to keep the bats going when we needed them (this year). If it was tomorrow or if it was yesterday, we might have won it. But it was their day today.

“This was our third straight year down here. We’ve had lots of experience. That’s why we’re here again. It gave us so much experience the last two years, and it gave all of our young girls this year more experience. Hopefully we can do what we do and get back (here) again.”

Changing things up a bit from last year’s Semifinal appearance seemed to do wonders Friday afternoon for Unionville-Sebewaing. 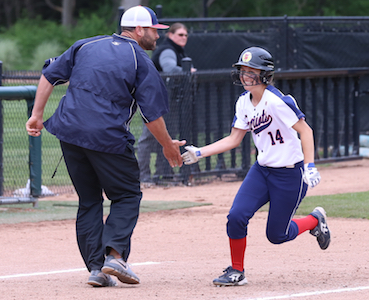 The Patriots, limited to just four hits in last year’s 4-0 loss to eventual champion Centreville, exploded for eight runs on 16 hits in their win over Rogers City.

“The last couple days, I’ve liked where we’re at offensively,” USA head coach Isaiah Gainforth said. “We had two really good days of preparation. To put 16 hits up in the semis, you can’t ask for much more offensively. I’m extremely proud of the girls’ approach, their discipline. Hitting is contagious. When someone starts it, everybody else is ‘Let me get the bat and see what I can do.’ That was kind of our mentality there.”

Sophomore Maci Montgomery was a perfect 4-for-4 against the Hurons, collecting three doubles and a triple, scoring twice and driving in three runs. Her leadoff triple to start the game got things going for the Patriots (30-9), and her two-run double in the fifth capped off the scoring for her team.

“Couldn’t ask for a better start,” Gainforth said. “It’s so important, getting that first run in any game. Being able to score first was big because it just loosens everybody up. When you get production from top to bottom, that’s a dangerous team right there.”

The team’s No. 9 hitter, junior Danielle Harper, also had quite a game. She was 3-for-3, scored three times and added a two-run home run to give herself a 4-1 lead in the fourth inning.

“We kind of learned from some of our mistakes last year,” Gainforth said. “A lot of these girls are back, but you’ve got some new girls. We weren’t in awe (today). The experience factor. Last year we were kind of consumed by it, and I don’t know if it kind of got to us a little bit. Today we kind of switched it up a little bit, got down here this morning and tried to keep our same routine and same approach that we’ve had in all our tournaments.”

Rogers City (27-8) was led by senior Taylor Fleming, who was 2-for-4 at the plate. She connected for a two-run home run in the fifth inning. Senior Linnea Hentkowski was 1-for-2 with a run scored in the loss.

“They hit the ball well. Give them credit,” Hurons head coach Karl Grambau said. “We’ve shut teams down all year long. They outhit us today, no doubt about it. They’ve got a great tradition, and so do we. Hopefully we’ll meet again someday.”