EAST LANSING – What a way to win a championship.

In a top-play moment, Unionville-Sebewaing turned a triple play in the seventh inning to secure a 3-1 victory over Kalamazoo Christian in the Division 4 softball championship game at Michigan State’s Secchia Stadium.

With runners on first and second base, the Comets’ Sammy Gano lined a shot off USA pitcher Brynn Polega’s arm. The ball ricocheted in the air to shortstop Rylee Zimmer, who touched second base and threw to first to complete the gem. (Click for video.)

Polega, a sophomore, had 15 strikeouts and a bruise on her arm.

“It hit me right in the elbow, and I just turned around and I said, ‘Oh my gosh,’” Polega said. “I said please get this, and I saw (Zimmerman) step on second. The runner on first was halfway to second, and I said that’s it. I was so excited when that happened. To win this as a sophomore is incredible.’’

“Chaos. I’ve never seen an ending like that,’’ added Patriots coach Isaiah Gainforth. “Whether in the Major Leagues, college baseball. I played a lot of different things, and I’ve never seen anything transpire the way that last inning did. I’m just glad we’re on the winning end of it.’’

Polega kept the Comets hitters at bay for most of the game.

“My curveball was working good,’’ she said. “My drop ball was good. Right before the game, my pitching coach and I were over there working on it. He said stay tall, keep my arm long and snap hard. That’s what I did all game.’’

She had six strikeouts through the first two innings, and by the end of the fifth she had racked up 12. 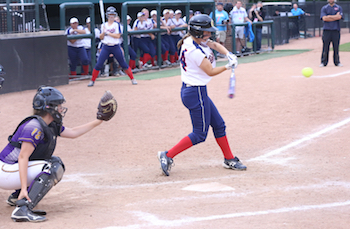 Staked to a 3-0 lead after the third inning and tossing a one-hitter, Polega never gave a young Kalamazoo Christian team a chance to get back into it before the seventh-inning dramatics.

The teams finished with identical records, and it would be no surprise if they met again in next year’s Final with USA losing just three seniors and the Comets losing two.

“We’re a young team and so are they, so it could happen,’’ said Polega.

USA had a first-inning threat as Zimmer tripled with one out, but she was left on base.

Polega mowed through Kalamazoo Christian hitters, striking out eight through three innings and getting out of a jam in the third with a strikeout.

The Patriots got on the board in the third inning when Maci Reinhardt singled and scored on a throwing error with Maci Montgomery at the plate. Polega bounced out, scoring Montgomery, and Delanie Pavlichek doubled in another run to make it 3-0.

The Comets finally got to Polega in the sixth inning on a single by junior second baseman Megan Snook, who eventually scored on a single by freshman Reagan Broekhuizen to make it 3-1.

Polega ended the threat with another strikeout, her 15th of the game.

“She was zoned in,’’ said her catcher, Montgomery. “Everything was right on the spot. She made a couple of mistakes, but the defense supported her.’’

Especially in the seventh inning.

PHOTOS: (Top) USA's Brynn Polega works through an inning on the way to pitching her team to a Division 4 Final win. (Middle) Macy Reinhardt (14) connects with a Kalamazoo Christian pitch.