ROCKFORD – Farmington United junior Elena Vargo wasn’t sure what to expect from high school gymnastics when she decided to give it a try this season.

Both received pleasant outcomes at Saturday’s MHSAA Individual Finals at Rockford High School – Vargo’s not necessarily surprising, but Ammon’s so stunning it moved her to tears multiple times.

Vargo, after leading United to the team championship Friday and posting the state's highest Regional all-around score a weekend ago, capped her first season of high school gymnastics with the Division 1 individual all-around championship. Ammon, meanwhile, moved up from fifth in 2018 to close her high school career as the all-around champion in Division 2 as she was the last to be announced at the end of a busy weekend in her home gym.

“I did come from a competitive environment, so I knew I was going to come here and I knew I was going to be competitive. But I didn’t know what the other girls were going to be like,” Vargo said. “I just knew that no matter how good or how the other girls did, I wanted to beat myself each time. So my goal for each meet was to say, OK, I got a 9.6 on bars, let’s get a 9.65. I just kinda keep pushing myself, and through that I guess that made me get to the top.”

She made the switch to high school this winter after years gaining substantial club experience. Vargo, a student at Farmington Hills Harrison, also carries a 4.0 GPA and takes part in her district’s International Baccalaureate program, and going the high school gymnastics route allowed her to still compete in the sport and focus on an increased academic load.

Farmington United – made up of students from Harrison, Farmington High and North Farmington – had a number of individual competitors Saturday, and all of Vargo’s rotations were filled with teammates. They were difference makers when Vargo took to the vault late in the afternoon.

“Because we had an hour and a half of just sitting there, I was tired, I was sick, and I guess the adrenaline really got me going,” she said. “And my coaches and my teammates, they’re the main reason motivating me. As I was going down the vault, I could actually hear them motivate me, and I’m like, ‘OK, let’s stick this.’”

Similarly, Ammon was one of five Rockford/Sparta Division 2 all-around qualifiers and was able to compete in every rotation surrounded by Rams. 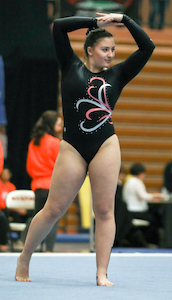 She had finished 13th all-around as a sophomore before moving up to fifth a year ago, and her victory Saturday included first places on bars (9.150) and beam (9.275).

It was after that final event that she and her teammates shared an emotional moment – but there was another to come as Ammon was stunned to hear her name called last to receive her championship medal.

“It was a good day. I just didn’t know that it was that good of a day,” Ammon said. “(I knew I’d won) when they announced second place. I seriously had no idea. I wasn’t paying attention to anyone else’s scores. I was just focusing on my own performances.

“After I finished my beam routine, I knew I had stuck all my events. I was so happy.”

O’Brien’s runner-up finish in Division 1 was especially impressive as she had finished third at her Regional just a week before. She posted top-six places on three apparatuses, with a high of second to Vargo on bars. Reigning Division 1 champion Cate Gagnier, a sophomore for Grosse Pointe United, finished third all-around at 36.525. Bloomfield Hills freshman Maeve Wright made her Finals debut by winning Division 1 balance beam with a score of 9.525.

Farmington senior Kacey Noseworthy won the floor exercise (9.400) on the way to her runner-up all-around finish in Division 2, while Ammon teammate junior Morgan Case took first in Division 2 on the vault (9.400). Huron Valley sophomore Nicole Graham finished third in the Division 2 all-around at 35.700.