ADRIAN – Last November, Kiarah Horn was part of the first Adrian Madison volleyball team to reach the MHSAA Semifinals in more than 25 years. She’d like nothing more than to do it again.

“It was an awesome experience,” said the Madison senior. “We all want to get back to where we were last year. We are excited about it.”

If the first few weeks of the 2017 volleyball campaign are any indication, the Trojans from Lenawee County could be knocking on the door again come MHSAA tournament time.

Madison went 57-4-2 last season, including a perfect 14-0 in the Tri-County Conference, and was a surprise winner over Monroe St. Mary Catholic Central in the Class C Regional Final. The Trojans beat Allen Park Cabrini to advance to the Semifinals at Kellogg Arena in Battle Creek before losing to Brown City. It was Madison’s first Semifinal run since 1993 when current head coach Dawn Opsal’s sister was a member of the Trojans team.

“It was so rewarding last year for the girls to get there,” said Opsal, who is a Madison graduate in her 20th season leading the program. “They worked so hard. To beat SMCC, to get to the Semifinals, that was a great experience for everyone. It kind of showed them that, ‘Hey, we can compete.’”

SMCC was the top-ranked team in Class C and a 2015 Class C runner-up when Madison knocked it out of the 2016 tournament.

Opsal, who works in the business office at Madison, was a four-sport athlete in high school and has been around Madison nearly all of her life. The school held a ceremony retiring her number a couple of seasons ago, but she is still going strong. Madison has steadily climbed the volleyball ranks since she took over the program in 1999, a season that saw Madison win just 10 matches. She now owns four TCC championships and six District titles since 2008. She has more than 500 wins.

This year, Opsal created a more rigorous summer schedule and beefed up the regular-season schedule. Topping the school wins record is the last thing on her mind.

“The 57 wins just sort of happened,” she said. “That wasn’t our goal. We just got on a roll and it happened. For me, it’s not about a record or number of wins. I want the girls to play hard, to work hard and get better and, when the time comes, be ready for the (MHSAA) tournament.” 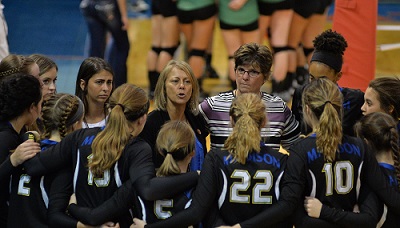 Horn, the senior setter, said the summer schedule was good for her and her teammates, who had to replace three key players, including Ysabela Soto, now playing at Oakland Community College in Auburn Hills.

“We played a lot of bigger schools,” Horn said. “It was a challenge.”

The regular season has been kind to Madison so far. The Trojans are 14-3-1 after winning Thursday’s match against TCC opponent Britton Deerfield. That also includes winning the Addison Tournament, advancing to the finals of the Tecumseh Tournament before losing to Ann Arbor Huron in the championship match (25-23, 25-19) and making it to the semifinals at Schoolcraft College before bowing out to Detroit Cass Tech, 25-22, 22-25, 15-8.

Madison played in summer leagues at Siena Heights University and Schoolcraft College, plus got into some games at Spring Arbor University.

“We have had a good start to the season,” libero Kia Rainey said. “We’ve played against some bigger schools. That will help us later in the season.”

Opsal said the schedule is by design.

“I kind of wanted to see some different schools and see how we competed with them,” she said. “I want to show this team right where we need to be.”

Of the 10 girls on the varsity roster, five are seniors and five are juniors. Jersi Garza, Taylor Jordan and Kaitlyn Svoboda are the three newcomers.

“I’m excited with all of the returning players and the young ones coming up,” Opsal said. “I know the team has great hope. Last year was a great experience, but we want to make that repeat again and again. We’ve got a lot of little things to work on, but there is time.”