HOWELL – It’s not hard to pick out the Weatherly boys on a baseball field. Sam, the senior, is 6-foot-3. Ty, a junior, is an inch taller.

But watch closely, and you’ll figure it out. Jason Ladd, the other half of the Highlanders’ varsity coaching pair, has seen it plenty of times.

“They’ve both got some of their dad’s athleticism for sure, seeing how he played four years at Central Michigan University and they won four MAC championships while he was there,” Ladd said. “He was a captain, and they get a lot of leadership quality from their dad.

“But it’s unique in the fact that they’re able to be so respectful. Sometimes when you get parents who are coaches, (the kids) aren’t respectful. But they’re both totally respectful to their dad, appreciative of what he does, and you can tell there’s a lot of love beyond being the son of the coach.”

It’s a lot of fun at the Weatherly house these days. But really, it’s been that kind of spring as Mike gets one final chance to coach both of his youngest sons on a team that could do some damage when Howell begins Division 1 District play today at Dexter.

Sam Weatherly is arguably the top high school baseball player in Michigan this season. A lefty, he hits 92 mph on the mound, and he’s signed to continue his career at Clemson University – which currently is playing in the NCAA Regionals.

Ty is finishing his first year of varsity ball, but coming on strong. A righty, he throws in the mid 80s and no-hit reigning Division 2 runner-up Linden a week ago.

It’s a question Mike can’t help but get asked – how do you go about raising such a talented bunch? There are some pointers to be offered there. But right now, the focus is just on enjoying every moment they can share.

Mike Weatherly was a shortstop at Central Michigan University – and a really good one, in fact.

So it makes sense that when he describes how his wife-to-someday-be flipped through the air in front of him back then, he calls it an “Ozzie Smith” in reference to the acrobatic Hall of Fame shortstop of St. Louis Cardinals lore.

He also knew at that moment that she was the one – or at least one he was interested in knowing better.

According to a Detroit Free Press report when she was a track star at Sterling Heights Stevenson, Marybeth had grown up in gymnastics and also was a cheerleader. She got into track later, but some of her school records still stand, Mike said. And because of her genes, her boys stand tall – the height is from her side of the family, as is their speed and a dose of their toughness.

“My mom had three older brothers. She’s been raised with wolves, and with us, she treats us the same way,” Sam said. “Crybabies never really happened in our house. You have to have a hard nose in this family." 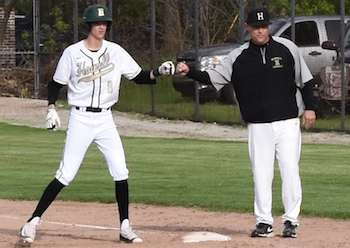 All four clearly have used those physical gifts to their advantage – Sam and Ty most recently in helping Howell to a 26-9-1 record.

Ty – who grew four inches just over the last year – is finishing up his first varsity season strongly. He has thrown 35 innings and is 5-0 with a 2.00 ERA and 30 strikeouts.

When Sam was 6, he asked his dad about college baseball. Ever since, Sam wanted to be a baseball player. He chose jersey number 6 because it was Mike’s; he’s worn it since.

Sam and Ty always were together as the two youngest kids, and played on the same teams for about five years with Mike as their coach.

“They were fortunate to be born with some coordination, and worked at it. And they had good youth experiences, playing Little League … we let them develop at their own pace, and I think that’s the key,” Mike said.

“There was no extra coaching going on. If you look at their innings pitched, they were really green; they didn’t throw a lot. Sam played freshman baseball (instead of varsity). I think this generation of people push too hard too early. If we did one thing right, that’s it, that’s really it. You have to go out and have fun and enjoy it. Because it can get ugly if you don’t.”

Ladd spun a bit of a phrase in describing Sam and Ty. He said they are nothing alike, but just like their dad. And, strange as that might sound, he’s right.

Ty might be the jokester, but Sam is the talker of the two, even if he’s a little more serious. Mike, meanwhile, recalled how his CMU teams were referred to as the “mouths of the Midwest,” but not him – he kept quiet and played, and Ty is much the same.

And yet, competitive fire, however the sons show it, reminds Ladd of their dad.

Ty indeed is more like Mike in that he keeps it under the surface. That’s not to mistake either as calm; it’s just the intensity doesn’t necessarily come with a voice.

Sam’s intensity, on the other hand, “is way out there.” Ty said this perhaps a little tongue-in-cheek – but he also knows that after a bad loss, his brother holes up in his room until morning.

“He gets really ticked off,” Ty said. “He hates it. He wants to win at everything.”

And Ty admires his brother’s work ethic in trying to attain that goal. So much so, he’d love to see his brother go out in a couple weeks as the last one standing on the mound at Michigan State’s McLane Stadium, putting the finishing touches on a championship.

“I know this season has meant a lot to him, and he really, really wants that state championship,” Ty Weatherly said. “I know if he went out there and got that W for us, it would be really special to him.”

It would be easy for Sam to look ahead. He wouldn’t have to look far.

Whenever Howell’s season does end over the next three weekends, he’ll officially become a member of the Clemson baseball program. 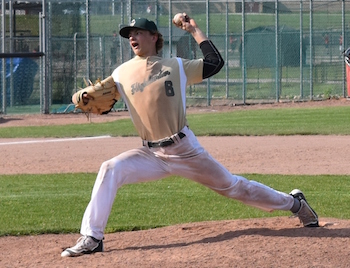 In a little more than a week, on June 12, the Major League Baseball draft will begin. He has a legitimate shot of being selected the second day, sometime during rounds 3-10.

But that’s not where his head, or rather feet, are today – or will be until the Highlanders have done everything possible to win their first MHSAA baseball championship.

And that’s not just saying the right thing because Dad is the coach. It’s especially apparent in his relationship with Ty – with all of this going on in Sam’s life, he’s still watching his brother’s moves on the diamond, ready with a few words of wisdom when they can help. Sam has gotten a lot of coaching from great sources the last few years, and through him Ty has been a recipient as well.

“I really care. I care about the team first, and personal accolades follow that,” Sam said. “You should be where your feet are, and my feet right now are in high school with my high school team, and that’s my first priority.”

“All of it kinda hits me off the field,” he added. “I use baseball and friends to get away from it. It’s fun, but I’m very anxious at the same time.”

Howell has eluded a state ranking despite recent wins over No. 5 Birmingham Brother Rice, No. 9 Sterling Heights Stevenson and ranked Division 2 teams Linden and Fowlerville.

With No. 10 Brighton being upset by Ann Arbor Skyline in a Pre-District game Tuesday, today’s possibilities got a lot more interesting. Not that anyone is looking ahead or expecting to win. But simply forecasting from the outside, there are opportunities to keep this thing together a little while longer – especially with a ranked rival no longer in the field.

Mike knows the way. He coached Hartland to the MHSAA Semifinals in 2000, and with Ladd led Howell to the final weekend in 2012 and 2013. Those runs had to be a little bit different, of course; now he's writing his sons into the lineup at this most exciting time of the season.

“We’re trying to enjoy every moment and slow it down because it’s going to be gone before we know it,” Mike Weatherly said. “It’s exciting, but I’ll admit it’s a little stressful too.

“There’s a lot riding on stuff, but at the end of the day things will work out the way they work out. We’ll keep plugging away. All we’re trying to do is win a championship, try to win their last game, and that’s been our focus.”

PHOTOS: (Top) Sam Weatherly, middle, stands with parents Mike (also his coach at Howell) and Marybeth. (Middle) Ty Weatherly shares a fist bump with his dad after reaching base. (Below) Sam Weatherly begins to unwind toward the plate during a game this season. (Photos by Andrea Leon.)