The Rockford High School sophomore scored the winning run with aggressive base running, also securing for himself the pitching victory in a 3-2 Division 1 Semifinal against Macomb Dakota in eight innings of steady rain.

“It’s awesome – an awesome atmosphere, an awesome field,” McLean said. “It’s the end (Saturday). We’ve just got to clutch it out at the end.”

Rockford (28-9) will play Portage Northern at 9 a.m. Saturday for its first championship since 2011.

Junior catcher Jeff Reseigh had two hits to lead the offense for Dakota (21-17-1). Set up by teammate Greg Guzik’s double, Reseigh’s sixth-inning single through the box scored a pair of runs and gave his team a 2-1 lead.

Down late, Rockford coach Matt Vriesenga said he reminded the Rams about their resiliency, as the team already had won two games in the eighth inning during the tournament.

“But they proved me wrong. We’ve been coming to practice, working on the little things all year long.

“It’s a super special team, and I’m really excited for them.”

In the bottom of the sixth inning, Rockford pinch-hitter Isaac Toole hit a two-out single and advanced to second base on a wild pitch. Alex Miller then hit an RBI single to left field to tie the score at 2-2.

Senior catcher Cody Sterkenburg started the game-winning Rockford rally in the eighth with a single.  McLean ripped a single to move him to second, and a fielder’s choice on a Miller grounder set up the winning play.

With two outs, junior Owen Cairns hit a dribbler to third base, picked up but thrown wide to first base, dragging the Dakota fielder off the bag as Cairns reached safely.

“All that was going through my mind was my seniors,” McLean said. “I was playing for them. I really wanted to play for them in the state championship, and I was just busting my tail down that line to score.”

Sterkenburg added a two-out RBI single in the third for Rockford, which got a strong starting performance by right-hander Zach Marshall, who threw six innings, allowing two runs and striking out five. Marshall scored on Sterkenburg’s hit after his own single.

For Dakota, righty Matt Biebuyck allowed one run over seven innings and had five strikeouts in the program’s first trip to the Semifinals.

Coach Gerald Carley’s Dakota team, which entered the game winning eight of 11 for an improbable run to East Lansing, will graduate six seniors.

French threw a complete-game shutout, allowing three hits and no walks, and striking out six in the gem. 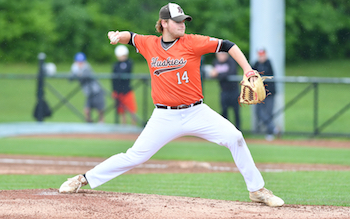 “Honestly, the plan was just come in like I have all season, just throwing strikes, filling up the zone and mixing up some of the pitches,” said French, who improved to 11-0 on the season. “With this big of a crowd, and people cheering you on, you just got to stay mentally focused and know what’s at hand. And I did that.”

Shortstop Nolan McCarthy delivered the big hit in the sixth inning with an RBI triple off the wall to score Eastern Michigan-bound Tyler Helgeson, who reached on a bunt. McCarthy then scored on an error.

Meanwhile, McCarthy led the defense behind French, as his diving stab opened the third inning.

Greg Lapetina, Jack Beffel and French added hits for Portage Northern (38-7), which will be playing for its first Finals title in this sport.

Sarkisian, who will pitch at the University of Chicago, allowed one earned run and struck out four over six innings for Brother Rice (25-13).

Sterling Hallman opened the seventh inning with a single for Brother Rice and reached second on a wild pitch. But French got three straight fly outs to center field to close the win.

Second baseman Tito Flores ended his Brother Rice career with two hits. His coach, Bob Riker, called Flores a “culture changer” for a program. Flores' next stop: University of Michigan, which will play in the College World Series.

As for Portage Northern, the Huskies are back in the Final for the first time since 2015 when they suffered a 2-1 loss to Hartland in 10 innings.

“We feel good to be back here,” French said. “We’ve been waiting a long time.”