Reiley Brown has three brothers of his own.

But the returning MHSAA champion wrestler at Whitehall High School said it might be more accurate for this article to include his fellow senior teammate Jwan Britton as a fourth sibling.

“We are the closest thing to brothers,” said Brown of his good friend and daily training partner – referring both to their time together on the Whitehall High mats and also the makeshift mat which Brown has set up in the pole barn behind his house.

“We really go at it and push each other to get better every day. I owe a lot of my success to him.”

Brown, 47-1, is seeking a second straight Division 3 individual championship, this time at 135 pounds, at this weekend’s MHSAA Individual Finals at The Palace of Auburn Hills.

The only thing that would make such a repeat sweeter is if Britton, who is 47-2 and a Regional champion at 140 pounds, could follow right behind him with a Finals championship of his own.

“At this point, it’s really hard to mention Reiley and his accomplishments without talking about Jwan,” said Whitehall coach Cliff Sandee, who is in his 10th year and has guided the Vikings to the Team Semifinals three of the past six.

Rare back-to-back championships for teammates would be a fitting end for Brown and Britton, who have been the backbone of a tremendous four-year run for the Whitehall wrestling program.

As a team, the Vikings achieved all of their goals this winter, including their 10th consecutive Greater Muskegon Athletic Association City Wrestling title. Whitehall, which finished 26-2 in duals, won its fourth straight West Michigan Conference and District titles, and then added a Regional championship.

The culmination of this season’s work led last weekend to Central Michigan University in Mount Pleasant, which hosted the MHSAA Team Wrestling Finals and also happens to be the school where Brown will wrestle next year when he becomes the first Whitehall wrestler to go on to a Division I college program.

It was almost “one and done” at CMU, as things looked mighty bleak against Richmond in Friday’s Quarterfinal match.

Richmond built a seemingly insurmountable 29-9 lead before the Vikings came roaring back to score the final 28 points, winning the final six bouts for an emotional 37-29 win. Whitehall’s victory was significant as Richmond and Dundee have dominated Division 3 team wrestling over the past decade, combining to win eight of the past 10 Team Finals titles.

“That was a huge win for us on a state level, because Richmond is such a great program,” said Sandee. “We want to be at team state every year; that’s the kind of program we want. I have six seniors this year, but we also have our most talented middle school group coming in, so we’re excited.”

Fittingly, unheralded junior Dominick Haynes started the comeback, pinning state-ranked Graham Barton at 130 pounds. That stunning six points led right into the strength of the Vikings’ lineup, with a pin from Brown and a major decision for Britton. 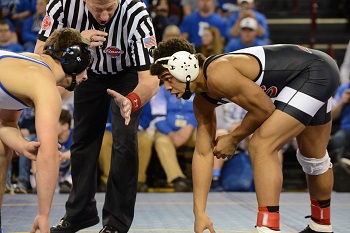 The Vikings dug another big hole in Saturday morning’s Semifinal. But a second miracle comeback was not in the cards against powerful Dundee, which raced out front 27-3 and held on for a 39-18 victory. Dundee then dispatched Remus Chippewa Hills 40-16 in the Final for its ninth team wrestling title and third in the past four years.

However, buddies Brown and Britton certainly got the attention of the Dundee faithful and many other wrestling gurus with big wins near the end of that dual. Brown rallied for a last-minute, 3-2 win over Tylor Orrison at 135, and then Britton used a takedown in the waning seconds to beat Zach Blevins, 4-3, in what could end up a preview of this weekend’s individual title match at 140 pounds.

Whitehall has two other Regional champions in JoJo Dowdell (145) and Hunter Bower (103).

Brown is the best known of the Vikings on the state level, taking second at 103 in his freshman year and third at 119 as a sophomore before breaking through for the 125-pound Division 3 championship as a junior. He comes into this weekend with the pressure of great expectations to go with a 181-12 career record.

“I try to use that pressure as a positive and feed off of it, to prove myself,” said Brown, who plans to study human resources at CMU. “I actually felt way more pressure going into team state, because my match there affects a lot more than just me.”

Besides, he has always felt right at home on a wrestling mat.

While many kids have basketball hoops in their driveways, how many can say they have their very own wrestling mat – along with an exercise bike and a heater – in a pole barn out back?

“My dad set it up out there when I was going into high school,” said Brown. “I’ve had some great battles out there with Jwan and my brothers over the years. Hopefully that extra work I’ve put in at home will pay off this weekend.”

PHOTOS: (Top) Whitehall's Reiley Brown works to gain control in his match Saturday against Dundee's Tylor Orrison. (Middle) Jwan Britton (right) lines up to start his match against Zach Blevins during the Division 3 Team Semifinal. (Click for more from HighSchoolSportsScene.com.)