Brownstown Woodhaven baseball coach Corey Farner was reading last month about Homer breaking its 2005 record for consecutive innings without giving up a run, and he had an idea.

"I started thinking to myself," Farner recalled, "'we've had quite a few shutouts in a row where we're at,' and I went back and double checked."

What he uncovered was an unknown chapter to one of the state's best high school sports stories this spring.

When the Warriors gave up their next run during the fourth inning May 17 against Melvindale, the shutout streak had reached 60 – surpassing Homer’s 48, and also 45 straight Frankfort had strung together to break the original 2005 record earlier this spring.

"You would think there was some pressure on them going through the season, and there really wasn't," Farner said of his players. "I'm naïve, but I think they were completely unaware of anything going on with the 60-inning streak, and most of them didn't know we broke it until I told them after the (Melvindale) game. I didn't let them know what was going on because, frankly, I didn't know until five hours before that."

The scoreless inning streak set Woodhaven apart among candidates to be named MHSAA/Applebee’s "Team of the Month" for May. But again, that’s been but one highlight of what might already go down as the best season in program history.

The Warriors are 30-5 and won their fourth straight Downriver League title. They entered the postseason ranked No. 9 in Division 1 by the state baseball coaches association. And then they claimed their first District title in program history with a sweep of Monroe and Temperance Bedford on Saturday. 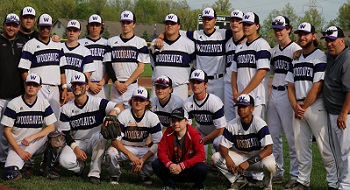 Success is nothing new to Woodhaven under Farner, who came over from Taylor Kennedy four seasons ago and has led the Warriors to a combined record of 118-24 to go with those four league titles.

He’s developed a program with impressive depth. Six pitchers took part in the scoreless streak – seniors Drew Szczepaniak, Justin Charron, Alonzo Chavez and Jacob Outland and juniors Colin Czajkowski and Kyle Ray – and all six have at least three wins on the mound, led by Szczepaniak (8-1, 0.98 ERA, 100 strikeouts) and Czajkowski (5-0, 1.23 ERA). Szczepaniak will continue his career next season at Western Michigan University, and Czajkowski has committed to sign with University of Michigan.

The team is led in part by seven seniors, half of whom came up to varsity as sophomores, and Farner could tell something was special with this group. The Warriors already have made a season’s worth of history for most, but have the opportunity to make more at Saturday’s Regional at Southgate Anderson, where they’ll take on Dearborn Edsel Ford and then with a win face either reigning Division 1 champion and current No. 10 Saline or Plymouth.

“This year, something was different,” Farner said. “The team chemistry is a lot better. The leadership is a ton better than it’s been in the past. It’s very difficult to try to develop leaders – it’s something they have to do and make that decision – and we have a good senior class that hold everybody accountable.

“And for them, there’s wasn’t a ton of pressure on them. They knew what they could do, and they just went out and were able to execute it.”

PHOTOS: (Top) Woodhaven's Drew Szczepaniak makes his move toward the plate this season. (Middle) The Warriors take a photo after a sweep of Taylor Kennedy on May 15. (Photos courtesy of the Woodhaven baseball program.)