Perhaps fleeting for most, it was one of the earliest memorable moments that eventually led to a career stretching four decades and impacting thousands of high school athletes across our state.

Wroubel – one of Michigan’s winningest high school coaches in both volleyball and softball with more than 2,000 combined victories – also has served as an athletic director and in various other leadership positions since beginning her educational career in 1975. Her contributions to educational athletics over the last 40 years will be celebrated Sunday, Feb. 7, when she receives the MHSAA’s 29th Women In Sports Leadership Award during the WISL banquet at the Crowne Plaza Lansing West.

“When I look at all of those names (of past WISL winners), knowing what they meant to the advancement of girls sports in schools and the total sports culture, it boggles my mind that I can be mentioned in those,” Wroubel said. “I’m not so sure I belong in there. I’ve had great leaders; my high school teachers and coaches were great leaders. I know nothing more than to work hard to make things better, sometimes inch by inch, sometimes two inches forward and one back – and sometimes leaps forward.”

The honor, given annually by the MHSAA Representative Council, recognizes the achievements of women coaches, officials and athletic administrators affiliated with the MHSAA who show exemplary leadership capabilities and positive contributions to athletics.

Wroubel, a 1971 graduate of Clawson High School, first returned to teach and coach at her alma mater, and currently serves as the athletic director, varsity volleyball and softball coach at Pontiac Notre Dame Prep. She also continues to teach sports medicine and leadership classes at the school.

She’s served in the athletic department at Notre Dame Prep since the school opened in 1994 and also coached and served as athletic director at the former Pontiac and then Oakland Catholic high schools after her stint as a coach and teacher at Clawson. She’s third on the MHSAA coaching victories list for volleyball with a record of 1,306-290-122. In 2015, she became the 14th coach in MHSAA softball history to win at least 800 games and sits 12th on that career wins list with a record of 826-293-3.

Wroubel also has been a registered MHSAA official in both volleyball and softball since the 1975-76 school year and has held numerous leadership positions as part of the Michigan Interscholastic Athletic Administrators Association, her sports’ coaches associations and the Detroit Catholic High School League. She’s hosted numerous MHSAA Coaches Advancement Program sessions and mentored young officials as part of the MHSAA Legacy Program.

“Betty Wroubel has dedicated much of the last four decades to assisting student-athletes and is passionate about the mission of educational athletics,” MHSAA Executive Director John E. “Jack” Roberts said. “Education is her life’s work, and that remains clear in her emphasis on coaches training and desire to continue teaching students as well – both in the classroom and on the volleyball court and softball diamond. We’re pleased to honor her with the Women In Sports Leadership Award.”

Wroubel earned a bachelor’s degree in education from Central Michigan University and her master’s in classroom teaching from Michigan State University. She was a five-sport athlete at Clawson High School – participating in basketball, volleyball, track & field, tennis and softball – and went on to play volleyball, tennis and field hockey at CMU.

Among those who provided Wroubel early mentorship was Judy Hacker, a teacher and coach at Clawson from 1962-95 who died in 2011 and like Wroubel was a pioneer in girls athletics during their early growth in the 1970s and 80s. Wroubel also was impacted athletically by her parents Marshall and Lucille; Marshall was a recognized youth baseball coach in Clawson and with Lucille provided opportunities for Betty to compete during an era when they were only first starting to emerge.

During her early years coaching and teaching at Clawson, Wroubel also worked as an assistant athletic director at Pontiac Catholic. She then took over as fulltime athletic director there, leaving her alma mater, but continued to pass on those many lessons learned to another generation including her Pontiac Catholic volleyball coach at the time, Dianne Phillips – who has gone on to rank 11th on the MHSAA volleyball coaching wins list with 986 victories mostly over the last 17 seasons at Dearborn High.

“Betty has dedicated her expertise, time and energy to coaching hundreds of young women in more than just sport, but in life lessons as well,” Phillips said. “Betty’s leadership skills and grounded philosophies are a model to all who aspire to teach and coach. The positive impact Betty has made on the lives of so many young people can never be overestimated.” 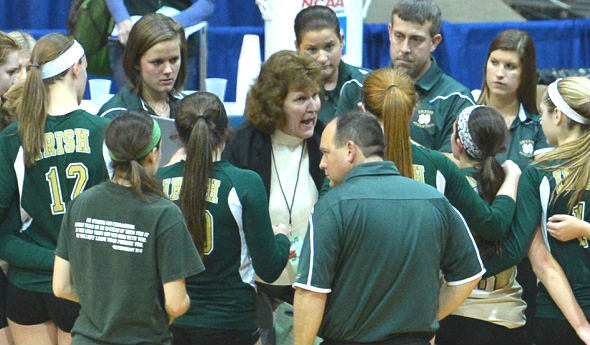 Wroubel led teams to MHSAA championships in two decades; her Pontiac Catholic softball team won the Class C title in 1983, and her Notre Dame Prep volleyball teams won Class B titles in fall 2007 and 2013. In 2010, Notre Dame Prep dedicated its new athletic facility in her name: the Betty A. Wroubel Athletic Performance Center.

As would be expected by a coach with such success across multiple sports, Wroubel remains an ardent supporter of athletes playing as many as possible despite a recent shift toward specialization.

“By (coaching both), I hope it sends a nonverbal message that if I can coach, they can certainly play multiple sports,” Wroubel said. “That’s been the biggest change; kids are so specialized. The pressure is on us (coaches) to do more and more training. But during the school year, we don’t do anything; I don’t get out a softball. That tells them to go play basketball, ski, go cheer, go bowl.”

Wroubel also volunteers for her church and the American Red Cross, and with a local food bank and soup kitchen.

The first Women In Sports Leadership Award was presented in 1990.