If it’s Tuesday, it must be volleyball — or is it soccer or maybe swimming?

Time to check the calendar, the phone app or the white board.

To keep up with two or more students involved in different sports in the same season, families have devised their own ways for keeping track of schedules.

The Carpenters, who have sons Matthew and Alex at Kalamazoo Hackett Catholic Prep, use several calendars, including a master schedule in the kitchen.

For the parents, it’s a question of logistics and juggling, which sometimes takes a lot of creativity.

“We have electronic calendars and paper calendars to look at every morning,” dad Tim Carpenter said. “We talk about who’s going where and who’s going to do what at the start of each day to figure it out.

“I keep a sports calendar to share with all the family so they can see the different things going on. If we are ever home at night without a game, it’s a strange feeling.” 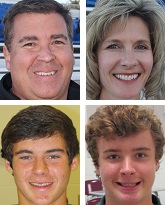 Besides the composite kitchen calendar, “We also have our iPhone calendar so we both can see one another’s calendar at the same time,” mom Julie Carpenter said.

“It’s pretty much Monday through Saturday, some game or practice. Sunday it’s Mass, groceries and laundry.”

The Perkins use a phone organizer app called Cozi.

“We try to get all the schedules in there so everybody knows where everybody else is,” mom Valerie Perkins said. “I usually have a white board on the kitchen counter that I update weekly, and it kind of tracks who’s got what when.

“The girls’ meets are on opposite days. Like Audrey will have something on Monday, Wednesday and Lauren has Tuesday and Thursday. Occasionally they both have Saturdays. Then we divide and conquer, for sure.”

With five children, the Carpenters try to split time evenly between all the activities.

Matthew, a senior, is Hackett’s soccer goalkeeper and Alex, a sophomore, plays junior varsity football. Oldest son, Josh, a sophomore at Michigan Tech, plays broom ball – and while his parents don’t travel to watch him play, the games are webcast during the winter.

The activities won’t end soon. Bennett, a sixth grader and Bethany, a third grader, both at St. Augustine in Kalamazoo, also are involved in sports.

The Carpenters try to attend all of their children’s games together, but sometimes that is not possible.

In that case, “We usually base it on who’s closer,” Tim Carpenter said. “If there’s one game south near where I work in Portage (at MANN+HUMMEL), I’ll usually go to that. 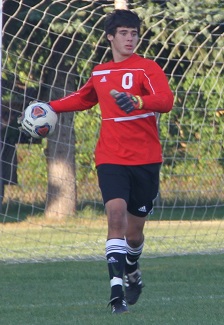 “If Julie (who works at Borgess-ProMed Physician Pediatrics in Richland) has only seen one of Alex’s games and I’ve seen two, she’ll go to Alex’s. We try to keep it even.”

Both parents were introduced to new sports once their sons got involved.

“(Our sons) haven’t done tennis or golf,” Julie Carpenter said. “Soccer’s got more action and excitement; basketball is similar. Skiing was neat because it’s such a close-knit community. Cross country was fun because it was a very team environment.

“I had not seen cross country before, but when Josh started cross country it was really exciting because we thought ‘OK, how much can you get out of cross country as a spectator?’ It was pretty exciting for us just to run from spot to spot. They’re such a close-knit group of kids.”

Whether there are five children or two, as in the Perkins family, parents face the same dilemma: trying to juggle work, practices and events.

“We usually try to trade off so we get an even mix of seeing the girls,” said Valerie Perkins, who works at Bronson Urology in Kalamazoo. “Sometimes Rob’s schedule dictates that. Sometimes it’s who’s ever closest.”

Rob Perkins, who works at TRW in Mattawan, said sometimes there’s a glitch.

“When they give us advance warning of what’s going on and it doesn’t change, then I can work around it,” he said.

“The only time it gets frustrating is when something changes at the very last minute, or maybe it was always the same and the girls’ stories change at the last minute,” he added, laughing.

Neither parent was familiar with the sports their daughters chose.

“With dive, Lauren started in eighth grade, so it evolved from a summer camp and she really enjoyed it,” Rob Perkins said. “We kind of fell into Kyle Oberhill, who’s the diving coach for (Kalamazoo College) and he manages the facilities for Western (Michigan University).

“He’s just really easy-going. (Lauren) excelled in it right away. As a freshman, she broke the school record. That kind of kept her motivated to keep going.”

Oberhill also had a workshop for parents to explain the intricacies of competitive diving, and that helped. Audrey, meanwhile, took on another sport new to her parents when she started playing volleyball in seventh grade.

“We didn’t know much about it, but the important thing to know about it is she enjoys it,” her dad said.

Rob Perkins said it would be much easier if volleyball and dive were not in the same season, but there is an upside.

“I would say, generally speaking, being in sports certainly builds their self-confidence, keeps them occupied.”

Their mother said she can see a positive influence of sports on their girls.

“I think sports have definitely improved them,” she said. “They’ve learned how to become leaders and work as a team, and I really appreciate that.

“I can see it develop in both of them over the years. Both are captains of their teams.”

And both sets of athletes said it’s important to see their parents at their games.

“It gives me more confidence,” Alex Carpenter said, “and makes me feel good that they want to see me play.”