Local radio coverage of high school sports can still be found in a lot of places these days – and for a couple of stations, they’re celebrating 77 years of service to school sports in 2018-19.

WTCM-AM in Traverse City and WJMS-AM in Ironwood are literally adjacent on your radio dial, but they’re 250 miles apart as the crow flies across Lake Michigan and through a lot of northeast Wisconsin. In 1941, they started their streak of broadcasting the preps into their local communities.

Mind you, there weren’t that many radio stations as you might think back then, when it was the only electronic medium. WJMS had signed on in November of 1931 and was only one of two stations in the Upper Peninsula at the time and one of 19 statewide, according to Federal Radio Commission records. One of the early issues the station faced was interference with its signal because of the density of iron mines in the area.

When WTCM went on the air early in 1941, there were still only 28 radio stations in our state; five were in the U.P., and WTCM was the only station in the Lower Peninsula north of Saginaw.

Les Biederman owned WTCM and was quickly persuaded by the locals to broadcast a Traverse City High School basketball game.

“So he got the equipment ready and got everything set up, they got permission and everything,” said Jack O’Malley, current program director at the station and a long-time play-by-play voice. “The night of the game, the superintendent says ‘You can’t do the game – the local newspaper is not real happy. They said if people listen to the game, they won’t buy the newspaper in the morning. So you can’t do the game.’ 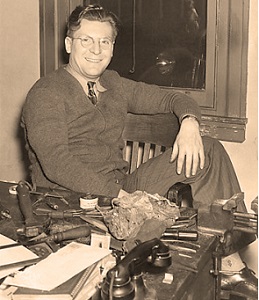 “So the town had already been told – they were promoting it; and when 7 o’clock rolled around, they went on the air and they announced they were going to do the game tonight, but permission had been revoked, so we can’t do it. And then they left the microphones open at the gym so that everybody could hear the basketball dribbling, the crowd cheering, the horns honking.

“About 15 minutes later, the superintendent was at Les’ door, saying that the phones had gone crazy, you’ve got to do the game. They started with the game and we’ve been doing high school sports ever since.”

WTCM added football and other sports to the mix over time, which played well with Traverse City High School being the only public school in town. The station’s focus these days is football, alternating between Central and West High Schools.

“The whole idea is that we’re part of the community, and WTCM has always been a community radio station,” O’Malley said. “High school sports are all about community. People say, I remember when this kid played on that team and you watch all the kids as they grow up. It’s really a connection through the ages.”

The Biederman family continues to serve radio listeners in the north, with Ross Biederman as the president of what has become the Midwestern Broadcasting Company with four stations in the Traverse City market and two in the Alpena area. And yes, one of the Alpena stations is involved in covering high school sports.

The paper trail isn’t quite as tidy when documenting the history at WJMS. The station moved from its original frequency of 1420 to 1450 after being on the air for about six years, then to 630 in 1947 and its present 590 on the AM dial in 1968. Veteran observers of U.P. radio concluded that WJMS began broadcasting high school games in 1941, which was confirmed by several newspaper articles in the old Ironwood Times from that year.

The station’s signal footprint, which would eventually reach from Marquette to well west of Duluth, Minn., by day, was the early stomping grounds for some great broadcasters.

“I can remember when I was 9 or 10 years old, listening to Bob Olson and Joe Blake doing high school basketball and football in the early 60’s,” said Rod Halverson, who currently calls games for the station.  “We had four local schools, Hurley (Wis.), Bessemer, Ironwood and Wakefield, which were all in the Michigan-Wisconsin Conference; and we covered those four schools. I remember listening and seeing those guys at the basketball games.”

Bob Olson, who died earlier this year, and Joe Blake went on from WJMS to purchase WMPL in Hancock in 1969. Olson would spend 35 years behind the microphone calling Michigan Tech ice hockey games and was legendary for his high-pitched tag going into commercial breaks: “This is Huskie Hockey from Houghton!” Blake would purchase WCKD in Ishpeming in 1971 (which later became WMQT-WZAM in Marquette) and run its operations until his death in 2004, calling Northern Michigan ice hockey and volleyball games. Both gentlemen received all kinds of accolades over the years.

But it was the style of an another announcer who followed Olson and Blake – Harry Rizze – who Halverson has worked hard to apply as he calls the games now.

“Harry Rizze was doing games when I started playing basketball,” Halverson said. “He made the games really personable. He would get to know the players by their first names – and he would use their first names on the air sometimes – that’s how close he got to the program. I thought it was a really nice touch. I’m doing some of that now, and I’m trying to emulate the two guys before me – Harry Rizze and Gary Aho.”

And in a place like the Iron Range of the Western U.P., there’s nothing like local radio covering local high school games.

“Some of the players I broadcast now, I played against their dads,” Halverson said.  “You get to know everybody.  Up here, we cover all of the schools the best we can.  I feel bad for the areas that don’t have radio coverage.”