BATTLE CREEK – With one set standing between them and a fourth straight MHSAA championship Saturday, several members of the Bronson volleyball team spent the break doing the “Cha Cha Slide.”

They were very clearly comfortable in Kellogg Arena. And while a game Unionville-Sebewaing team made them earn it, the Vikings left their second home with that fourth title, defeating the Patriots 25-19, 25-19, 25-23 in the Division 3 Final.

“This team is totally different than our teams of the past,” Bronson coach Jean LaClair said. “They don’t get excited, and we just kind of play calm. We have that calm demeanor all the time, and that sometimes worries me. Even today, they weren’t excited, they just took care of business. That’s one of the things that makes them special.”

For this group of seniors, however, it started well before they were freshmen.

“I think it really makes you appreciate the team, because we’ve seen so many great players go through this program,” senior Ashton Wronikowski said. “Kiera (Lasky), Jolie (Smoker), me and Paris (Outwater) managed, so when we were 5th and 6th-graders we were on this team. We were riding buses everywhere, we were going to practices, we were in this family since we were in junior high.

“Seeing so many great players go through this program and how the team chemistry is, there’s no words for it. It’s incredible how so many people can just come together and unite for a common goal.”

Lasky and Wronikowski played in all four title victories, and as Lasky astutely pointed out during the post-match press conference, she doesn’t know any other feeling than winning at Kellogg – although there was something different about this one.

“This one is just really bittersweet, I guess,” she said. “Going out with a win and going out with my favorite people. It’s exciting.” 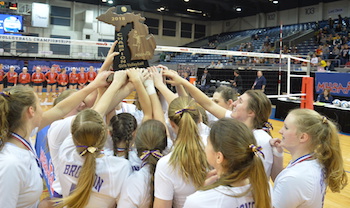 While the Vikings won in a sweep, USA (44-5-1) did make things exciting throughout the match, building multiple leads that required long Bronson runs to overtake. Bronson went on a 12-1 run to take a lead and pull away late in the second set, and trailed 12-6 in the third before gathering itself and putting the match away.

“I’m happy with the way we played; it just wasn’t our day today,” USA coach Teresa Rose said. “This is our first time being (in the Final), and maybe the atmosphere of it, we just couldn’t capitalize sometimes on getting to their attacks and defending as well as we could have. They played with their hearts, and I’m proud of the way they played.”

In the third set, LaClair didn’t have a chance to address her team after it fell behind 12-6.

Lasky took care of that.

While the senior libero didn’t want to repeat what she said in that huddle, it clearly worked.

“I kind of told (LaClair) ‘Just go away. I’ve got this,’” Lasky said. “We really came out of it, got a couple points back, and then after that we were like, ‘OK, next ball, that last play doesn’t matter.’ That got the job done.”

Lasky finished with 14 digs and five assists in her final match for the Vikings, while junior Keona Salesman led the attack with 19 kills. Smoker added 13 kills, Wronikowski had six, and Meagan Lasky had 35 assists.

Rylee Zimmer led USA with 16 kills and 10 digs in her final match for the Patriots. Nichole Schember had 28 assists, and Maci Montgomery had 14 digs.

“I think (the Finals appearance) will do a lot for our program,” Rose said. “I think there’s a lot of kids that want to come and play like Rylee and Nichole and Grace (Williamson), and they see them in the community and they want to be like them eventually. They want to be state champions or runners-up. I think it’s good for our program. Good for our community and our school.”

PHOTOS: (Top) Bronson walls off the top of the net during its Division 3 Final win over Unionville-Sebewaing on Saturday. (Middle) The Vikings hoist a championship trophy for the fourth straight season.