CARNEY — It has often been said practice makes perfect.

So far that has applied to the Carney-Nadeau Wolves, who have won all 10 of their volleyball meets this season. They are ranked No. 9 in Division 4 by the Michigan Interscholastic Volleyball Coaches Association.

“We spend a lot of time together on and off the court,” said senior outside hitter Taylor Kedsch, who recorded 10 kills and four digs against Munising in the team’s most recent match last week. “That helps our communication and helps us jell as a team.

“We didn’t really expect to be undefeated, but we’ve worked hard. When we were under ‘stay at home’ orders (due to Covid-19), I did some weight training at home. Then, we got to a point (5-6 weeks later) where we could practice once a week. It definitely felt great to get together again.”

“We’re kicking off the season real well,” she said. “We’ve cleaned up a lot of things and been improving steadily. Having to wear a mask during matches and practices has worked real well for us. It’s safer and not much of a problem.”

“I feel it’s working pretty well,” she said. “I look to see who’s hitting well. When (Coach Steve Kedsch) finds a hole, he lets us know. We work real well together. Our team chemistry and communication have really picked up. During the ‘stay at home’ orders, a friend of mine who’s in college and I would skype and do practices together, which I think really helped.”

Among the Wolves’ achievements is a 25-19, 25-17 triumph over Kingsford in the final round of their quadrangular meet Sept. 26.

“That was probably our best match,” said Taylor Kedsch. “We were doing pretty well defensively. I think our team is doing real well. We’re grateful for everything.” 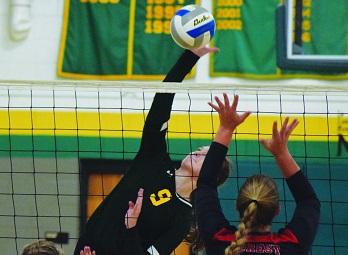 Coach Kedsch has similar thoughts about this season.

“We were fortunate enough to know we were going to have a season,” he said. “The girls came into the season in pretty good shape. Our seniors did a good job leading the juniors and motivating them. Our role players are getting better. Mel Baumler and Mackenzie Walcher have kind of gone to a place where they needed to be. I give a lot of credit to the girls for accepting different roles. This is a different game from jayvees. This is a faster game. We can only control what we can control. We try to run a fast-paced game.”

Coach Kedsch says serving has been a key to the Wolves’ success.

“We knew we had good servers on this team,” he said. “But we’ve been serving more than 92 percent as a team which was a surprise.

“This has been such an enjoyable season for me. We’ve gotten great support from our assistant coaches Dale Harris and Maisy Johnson and we have a senior group that’s so dedicated to the sport. They’re very focused and doing well this season. Give credit to the kids for buying into the program, taking ownership and providing input.”

Next up for the Wolves is a trip to Peshtigo, Wis. Monday.

“Taylor and I play on a club team with some of the Peshtigo girls,” said Ernest. “We’ve gotten to know them pretty well. We can put a game plan together. It should be a good match.”

“I think that will be a good challenge,” she said. “We’re going to have to know where their strengths are and make our adjustments.”