LAWTON — Olivia Cramer wears her friends proudly — on her leg.

When she is not wearing a blade to play volleyball or basketball, the Lawton High School junior wears a prosthetic, but it’s not just any leg.

“I’ve had pictures of my friends on it for a couple years, and there’s the homecoming court my freshman year, softball game, at work,” she said.

While the decoration of the prosthetic leg is a novelty, the need for the limb certainly isn’t.

Cramer was born with non-genetic proximal femoral focal deficiency (PFFD), a condition that has resulted in her right leg measuring inches shorter than her left.

It is an uncommon condition that affects about 1 in every 200,000 children, according to statistics from the Children’s Hospital of Philadelphia.

The prosthetic leg assists with everyday life. But when it comes to athletics, she wears a blade, similar to those worn by runners.

“We call it my running blade,” Cramer said. “Mine is designed a little differently than an amputee because I still have my leg bones and foot.”

The custom-made blade, officially called the Freedom Innovations Catapult, is made of carbon fiber and has a rubber tread on the bottom so it will not damage the court.

“It’s about a two-week process and it was a little bit of a challenge to make,” said Tim Darling, a certified prosthetist at Hanger Clinic in Kalamazoo who fashioned the leg and blade. 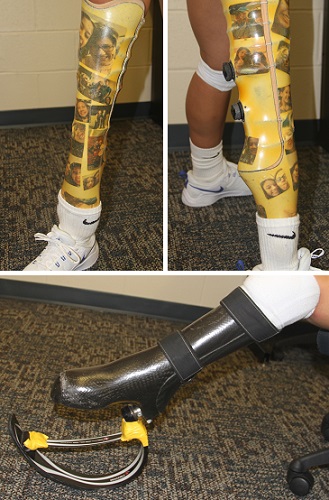 He also was instrumental in adding the photos. “She provided the photos printed on a T-shirt and we used materials to reinforce it and then used an acrylic lamination,” Darling added.

Instead of Velcro straps to keep the leg attached, Cramer has two dials that tighten the leg.

“It has string made of Kevlar and you can tighten them so I don’t have to have straps covering my leg anymore,” she said. “Before, it was just Velcro and came loose a lot.”

Darling said it is a relatively new process for a prosthetic.

“Working with her is humbling,” Lawton volleyball coach Megan McCorry said. “When you see someone with a physical disability like that and you see that same person is also the most positive and most encouraging, it really makes you do a gut check.

“It gives you some perspective in life that what you have going on may not really be that bad, and you need to work harder at putting your best foot forward.”

Cramer was pulled up from junior varsity during the District last year and practiced but did not play.

This season, she sees court time and, “She’s honestly one of those kids that you can’t not have on your team,” McCorry said.

“I mean she is always 100-percent positive. She is going to be the loudest one on the court, loudest one on the bench. She’s always supporting her team, and she’s just so determined to get better individually and make her teammates better.”

Since she jumps off her stronger left leg, the blade does not give Cramer any advantage, but at least once caused a gaffe.

“During a match, my friend Madison Lawson and I were going for a block on the outside and we fought for the block and we came back down,” Cramer said. “Madison landed on my blade and snapped it.

“We didn’t know what happened at first because there was this huge (sound) right in the middle of the match and I was like, ‘What just happened?’ We even stopped playing because of it. I went to step and my leg didn’t spring like it usually does.” 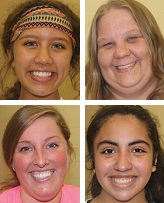 The junior said her teammates are very supportive.

“We do watch out for her leg to make sure she doesn’t hurt it, but usually even if she falls down, she gets right back up and she’s usually the one picking everybody else up.”

Cramer’s mother, Megan Cramer, said when she was pregnant, her first ultrasound showed an abnormality in the leg, so she was prepared when Olivia was born.

When learning to walk, Olivia would walk on her short leg and balance on the knee of her good leg, her mother said.

As Olivia grew older, doctors gave her mother two choices: amputation or rotationplasty (fusing the knee on her shorter leg and rotating her foot around to where her knee joint would be). That new joint is where her prosthetic would have connected.

Her mother chose neither.

“I was a young mother, and I was scared to death and I was, ‘You’re not cutting her foot off,’” she said.

They visited several hospitals and finally went to the Shriners Hospital for Children in Chicago.

“That was the first place we went where they said let her be,” Megan said.

That is what her mother did.

“I am glad that they never had it amputated, and I never had rotationplasty,” Olivia Cramer said. “My condition is pretty rare, and because I didn’t do any of the amputation that makes me even more special than it already was, so I really appreciate it.”

She goes to the Shriners Hospital every six months for checkups and gets a new leg and blade when she outgrows the old ones.

Golf is Cramer’s true love, and she hopes to pursue it in college.

When playing, she wears her regular prosthetic, not the blade, and, last year, was captain of the school’s boys team (Lawton has no girls team). 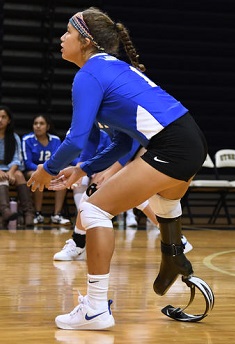 She also played the Lakeshore Junior Golf Association tour during the summer, carrying a 12 handicap and winning the 16-18 girls division.

“Those accomplishments are all special, of course,” Lawton golf coach Barry Shanley said. “But what makes her truly remarkable is her spirit. If you didn't see her prosthetic, you would never know she even has one.

“For now it's actually an advantage for her college goal to play on a high school boys team. The boys play from the men's tees, which is the typical length for collegiate women, so college coaches know her scores now already match what length their own players are using.”

Shanley said the only way her prosthetic affects her swing is that her hip alignment can be a little unbalanced.

“Once she stops growing and her prosthetic is matched to her other leg permanently, there won't be any issue at all,” he said.

“Because it's difficult to keep them matched, which now can cause her some pain if she walks the typical 5.6 miles in 18 holes or the 2.8 miles for 9 holes, we wrote and received permission from the MHSAA to let her take a golf cart during matches.”

Right now, though, Cramer is focused on volleyball, with her team’s record 13-9 midway through the season. The Blue Devils will host an MHSAA Division 3 District beginning Nov. 4.

No matter the sport, Cramer said she follows her grandfather’s advice.

“My grandpa always has said, ‘Don’t ever say “can’t” in this household. That’s a word that’s not in our dictionary.’

“I guess that’s shaped me into who I am today, being able to persevere through all the difficulties, even though I like to think I have it just as fair as everybody else does, that we’re on an equal playing level.”

Cramer has one hope:

“I hope that if anybody sees this and is down in the dumps for any kind of condition they have, just persevere through it and prove to other people that you are better than they can ever think that you can be.”