That was the expectation from the time the ball was rolled onto the court for the Mustangs’ first practice in August.

“Although it was a goal, that never made us get complacent or get lazy,” Marian senior and Miss Volleyball winner Ava Brizard said. “We always worked our butts off like we were the underdogs, like we were the last-ranked team in the state. We always worked so hard even though people were expecting us to go back-to-back. But we just kept setting that bar higher and higher for ourselves, and I think that’s what really helped us get to this moment right here.”

The title was the second straight for Marian, and fourth in program history. The Mustangs rolled through the season as Division 1’s top team, going 53-1, and dropping just four sets coming into Saturday’s matchup. All this with a giant target on their collective back.

“I felt this enormous amount of pressure all season,” Marian coach Mayssa Cook said. “As a coach you like to think you have more control than you do. I tried to carry as much of it for them – I knew they had a lot on their plate and a lot on them. I will say I was so impressed with their composure and how they handled stress all season long. I absolutely know the four seniors on this team (Brizard, Janiah Jones, Sophie Treder and Sarah Sylvester) are very ready to step into playing roles at the next level. Most girls going into college don’t have this level of experience, level of play under pressure that they have had. So, we’re exceptionally proud of them as a school.”

Marian did not play like a team under pressure, running out to a double-digit lead in the first set and winning comfortably. But Skyline (55-4-2) came roaring back in the second with an attack led by Harper Murray and Cari Bohm, and handed the Mustangs just their fifth set loss of the season.

“I think we just have the offense that has the ability to compete with them,” Bohm said. “With Harper and me, we have some big hitters – Kate (Maley) -- they haven’t seen that competition yet.” 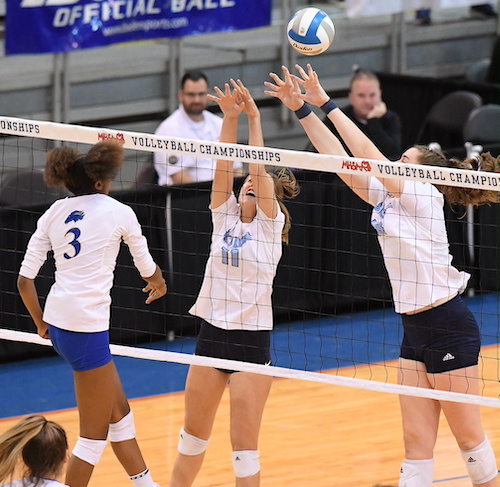 Marian responded to the rare setback, and while Skyline hung tough for most of the final two sets, Marian simply had too much down the stretch.

“Throughout the game, more of in the second and the later sets, we figured out that their right side defense wasn’t as strong, so we started targeting that,” Skyline senior setter Lauren Lee said. “Toward the end of that last set, they kind of caught onto what we were doing and polished it up.”

Brizard and Murray put on the show they were expected to provide as two of the state’s best attackers, each finishing with 25 kills. Brizard was backed by Treder’s nine kills for Marian, while Ella Schomer had six and Jones and Sylvester each had five.

Ava Sarafa had 44 assists and 12 digs for the Mustangs, who played solid team defense. Brizard led the team with 13 digs, while Lauren Heming had 12 and Treder had 10.

Bohm finished with 11 kills for Skyline, and Lee had 46 assists. Jordan Hall had 21 digs for the Eagles, and Murray added 14.

The trip to the Finals was the first for Skyline in its fifth year as a program. It had qualified for the Semifinals in 2019.

“I think this year it was our focus to get to Battle Creek and be in the Finals, and to give whatever team was on the other side a battle,” Skyline coach Chris Christian said. “I’m proud of these ladies, because they gave Marian a battle. It wasn’t like it was two years ago when we were here and we were just not ready mentally, not really equipped. This time, we were ready, and I think for them to be able to see that anything is possible from where this program started five years ago, we’ve come a long way. There still is room for growth for us.”