BATTLE CREEK – It took the Mendon volleyball team only one tournament to realize how good it was this season, and the Hornets certainly weren’t shy about making big proclamations.

“We started really early,” senior outside hitter Hayley Kramer said. “Our first tournament we were like, ‘We’re going to be state champions.’”

Mendon made good on that claim Saturday, sweeping Leland 25-16, 25-21, 25-14 to claim the Division 4 title at Kellogg Arena. It was the program’s fourth MHSAA Finals championship, and first since 2001.

“It’s been our goal the whole entire season,” senior middle blocker Mackenzie Urick said. “We have a goal sheet, and that’s the top. Our mindset, that’s where it was, to win state. One game at a time, just to get here.”

The drive to get to Battle Creek and walk out victorious began more than a year ago, as the Hornets (49-6-3) were stung by a District Final loss to eventual Class C champion Bronson. While nobody could fault Mendon for suffering from a tough draw, the players were having none of it and set out to make sure they didn’t have that feeling again.

“After losing in the District Finals … it hurt,” senior middle blocker Cierra Nightengale said. “So we practiced, practiced, practiced. (First-year coach Heather Bowers) wasn’t even officially hired yet and we were in the gym practicing because we just wanted to get the season started. We knew our potential, and we just did it.”

Mendon dominated throughout the postseason, dropping just one set during its seven-match run to the championship. It swept both of matches at Kellogg Arena, as it had defeated No. 4 Southfield Christian 25-18, 25-15, 25-13 in a Semifinal on Friday.

It was top-ranked Leland (47-11-1), however, that was able to create the first bit of space between the two teams Saturday, going up 7-4 in the first set. But a Mendon timeout changed everything. The Hornets – ranked No. 2 heading into the postseason – went on a 5-0 run after the timeout, and controlled play through the rest of the set before taking it 25-16. 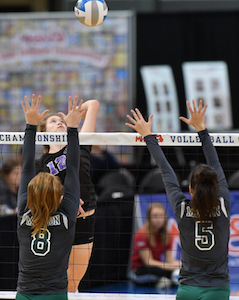 Leland led for much of the second set, but Mendon kept within striking distance and struck late to pull away for a 25-21 win to put itself one set away from the title.

“I think we just go hard every single point,” Nightengale said. “We go little games of five, which I think is what a lot of coaches teach, little games of five until you get to 25. The second game, they were up 19-16 or whatever, and we were like, ‘OK, time to push more.’ And we came out with the win.”

The third set was controlled by Mendon from early on, and as it went on, the Hornets’ confidence seemed to grow. Fittingly, it ended with an ace from sophomore outside hitter Anna Smith, who dominated throughout the match. Smith finished with 18 kills on 32 attacks. She was in on five of the last six points of the match, combining with Nightengale on a pair of blocks, adding two kills and the final ace.

“Back in the day when we played against (Battle Creek St. Philip), they had Allyson Doyle (who later played at Western Michigan), I feel the same way about this kid,” Leland coach Laurie Glass said of Smith. “She jumps really well, she’s up there long enough to see what she wants to see, and she’s got a whip for an arm. She’s going to be a great player – she's going to continue to be; she already is a great player.”

For those Leland seniors, it ended a career that started with a Division 4 championship won during their freshman year in 2015.

“I think it says a lot about what we did this season,” Siddall said. “I think we just did our jobs all throughout, and every game it was steady. I think maybe today was a little different, but I’d say this season overall we did really good.”