ROMEO – Gia Milana’s pace at this stage in her life is as fast-paced as the sport she plays.

Milana, a 6-1½ outside hitter at Romeo, is one of 10 finalists for the 2015 Miss Volleyball award presented by the Michigan Interscholastic Volleyball Coaches Association. There are those who contend she’s the favorite.

Ask Milana about the award and she’s a tad reserved, deflecting the attention given to an athlete who plays a team sport who’s under strong consideration for an individual honor.

“It would be the biggest honor. But I’m more focused on making my team better.”

Winning. That’s what Romeo did last season. The Bulldogs won the school’s first MHSAA title, downing Novi in five sets in the Class A Final, and this season they’re off to a 22-4 start and ranked No. 7.

This year’s team is different in many respects. For one, there are just four seniors. Not only did graduation put a premium on the amount of talent coming back, but it also left an opportunity for returning players to take over leadership roles that were so important in 2014.

“Last year at this time,” Milana said, “I feel last year’s team would crush us. We have the potential. Our transitional defense is horrible. To make another run we have to have the mentality that the ball won’t hit the floor.

“If we want to make another run we have to step up our game. One or two players can’t do it. Volleyball is a team-oriented sport.”

After spending six seasons as the junior varsity coach, Stacy Williams is in her 10th as varsity head coach. Williams played the sport at Sterling Heights High School and then Macomb Community College before she got into coaching. Williams credits former Romeo coach Bruce Udvari for nudging her into the profession. And she has nothing but gratitude to her former boss. 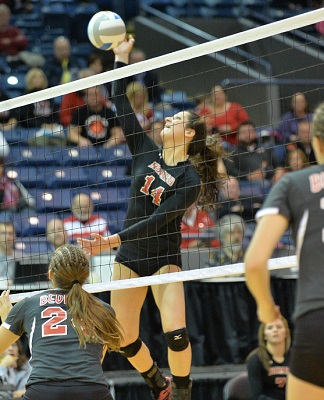 Williams also has nothing but praise for her star player.

“She’s a leader by example,” Williams said of Milana. “She’s 100 percent committed to every play. She has some pretty amazing attacks. The cool part of the team is, offensively, we have some real strong players. And then you have Gia. Teams will focus on Gia and it helps in a sense. People are looking at her, and it opens it up for others.”

Among the “others” are juniors Jodie Kelly and Payton Klein, and seniors Erica Labaere, and Nicole Nowack.

This season the libero position, often a strength for most teams, has been a bit of question mark for Williams. She’s used as many as five or six players. Recently, according to Milana, Nowack has shown steady play in that spot.

A back injury hampered Milana’s play at the start of last season. She missed the first 20 games and said it took a while for her to get back into the flow.

This season she hasn’t missed a beat. Through the first 25 games she had 315 kills. Even so, her role is different. Before high school and in her first three high school seasons, Milana was always the younger player facing girls older than her.

“I’m the core now,” she said. “It’s a different experience being the leader. It’s been quite a transition.

“We won states. We’re expected to win it again. We’re doing good in the transition. We know we have to work harder in practice.”

Milana committed to University of Maryland and plans to enroll in January. She chose Maryland because of its coach, Steve Aird, who is in his second season after serving as an assistant at Penn State.

Another reason Milana chose Maryland was its campus. College Park is a rural area, and for a girl from Romeo who spent her first 12 years on a farm, it has its attractions.

“I like the rural, pretty campuses,” she said. “I didn’t want to go to a college that was in the city, like Michigan.

“Maryland was horrible (when it was a member of the Atlantic Coast Conference). Now they’re in the Big Ten and … they’re better. I want to be a part of building a program.”