But with the opportunity to seal Farmington Hills Mercy’s first MHSAA Division 1 volleyball title at her fingertips, Miss Volleyball showed some touch.

“I knew as soon as I got blocked (at 24-23) that, ‘Man, I probably shouldn’t have done that,’” Mruzik said. “I knew what I was going to do right after that. I knew that I made a mistake there, and I just wanted to win that point and win it for my team.”

“It’s unreal,” Mruzik said. “This is the best way you can end your high school career, and I’ve been fortunate enough to be in such an amazing program with amazing coaches and amazing teammates. Honestly, that wouldn’t have been possible without all the passers passing great passes, Julia (Bishop) feeding me the ball pretty much perfect every single time. That’s something I’m fortunate to have.”

The final kill may not have hit with the same thud as the others, but it set off a celebration several years in the making. Mercy (58-1) has spent much of coach Loretta Vogel’s 11 years leading the program as a highly-ranked team, but its best finish was as Class A runner-up in 2010.

As her team piled up in celebration near the net, Vogel couldn’t help but join in.

“I had to,” Vogel said. “You don’t know whether it’s going to happen again. (Bishop) said it once in an interview, ‘I just want to be in a pile at the end of the game.’ You do think of that. It doesn’t happen very often, so I joined.”

Vogel brought her entire team into the postgame press conference to drive home the point of how special this group was.

"I think from the beginning, everyone plays their role,” Vogel said. “We didn’t bring anyone up from our JV or freshman team, because it was emphasized that they’re a very close-knit group, and I respected that. Why I wanted everyone here is that they’re (together) every day, and they’re very close. In the end, they like each other, also.”

Mercy won a hard-fought first set, but showed its ability to dominate in the second, ruthlessly wiping out a 9-4 deficit and taking the set’s final 13 points to take a 2-0 lead.

But after that, the Marlins faced something they had rarely seen all year: adversity.

Lowell managed to dig deep and take the third set, despite giving up another lead. The Red Arrows led 20-15, but Mercy came back to tie the match at 22. Lowell stayed mentally strong, though, and won three of the next four points to keep its season alive and force a fourth set. 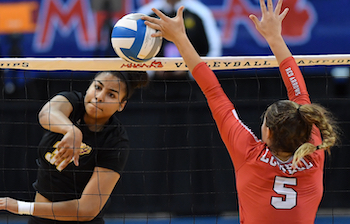 The Red Arrows again had a lead in the fourth, this time going up 15-12 midway through. The two teams traded points and mini runs until they were tied at 23 and 24, setting up the final two kills from Mruzik to end it.

“In the fourth game, I was getting a little nervous,” Vogel said. “But we were able to stay with the plan. I think a lot of times when we get in our timeouts, it’s not just all the coaches talking about things, but the players knowing who we need to watch, giving suggestions. I think that was extremely helpful not just today, but any of our matches we’ve had this year. This one was obviously real tight, but we had one other that was extremely difficult, too.”

Lowell (55-4) – which had handed Mercy its one loss of the season, albeit early in the year while Mruzik was playing in a tournament overseas – did a good job of making Vogel and the top-ranked Marlins sweat despite falling in a 2-0 hole.

Mruzik, who will play at University of Michigan next year, added 15 digs, while junior setter Bishop had 54 assists. Junior Ellen Tisko had 14 kills, and sophomore Amina Robinson had 22 digs.

PHOTOS: (Top) Farmington Hills Mercy’s Jess Mruzik sends a kill between a pair of Lowell blockers Saturday. (Middle) The Red Arrows’ Meghan Meyer (5) gets a hand on an attempt by Mercy’s Charli Atiemo.