But as sports were put on pause late this past fall, the volleyball team found another animal to represent it and get it through the break.

“We definitely adopted some new mottos over the break,” senior middle hitter Abbie Costlow said. “We got a lion – our team represents a lion. And that’s really propelled us through this last run of the state playoffs. It’s really helped us and driven our focus.”

The Kestrels were lion-like Saturday, claiming their second straight Division 3 volleyball title with a dominant 25-19, 25-16, 25-8 win against Schoolcraft. It’s the seventh title for the program, and for the second-straight year they capped it off with a win against Schoolcraft in a matchup of the division’s top two teams in the rankings.

It also was the end of a dominant run this season for St. Mary, which won its final 23 sets and didn’t drop one throughout the postseason.

While the 2019 Final was a five-set thriller, this edition was dominated by St. Mary throughout, as it charged out to a 6-0 lead in the first set and never looked back. The Kestrels trailed only once through the entire match, as Schoolcraft took a 2-1 lead in the third set. That was immediately wiped out, however.

“As we talked pregame, it really didn’t matter what they were doing on their side; it mattered what we were doing on our 30-by-30 court,” St. Mary coach Karen O’Brien said. “It was important that we just came out strong for us.” 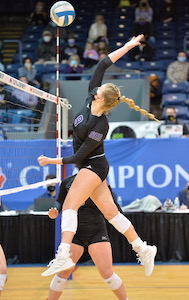 The Kestrels’ two-headed monster of Costlow and Mikayla Haut led a dominant attack, as Haut had 17 kills and Costlow had 14. Each were above 35 percent on their attacks, and the team was at 32.1 percent overall.

“For one, our passing and our defense was extremely good,” O’Brien said. “And then, with those two things, our setter has three options. We started off, in the beginning of the first set, I think Abbie had four or five kills in a row, and I don’t know if that caught them off guard a little bit, because normally we feed Mikayla at the beginning. Abbie got the first five swings, and I just think with our passing and our defense, and a lot of that has to do with Jaydin (Nowak) playing the back row, and Ava Kuehnlein and Mikayla in the back row, that they’re so used to each other and have such great chemistry. As long as we’re passing and playing defense, we can run anything that we want to. The defense on the other side just doesn’t know who it’s coming from.”

Nowak led the defense with 23 digs, while Haut – a Miss Volleyball finalist who is headed to Fairfield University in Connecticut – added 12. The Kestrels’ two setters were also busy, as Kate Collingsworth had 28 assists, and Grace Lipford had 12.

Kelby Goldschmeding led Schoolcraft with 15 digs, while Allie Goldschmeding had 12. Kayla Onken had 15 assists for the Eagles (37-4), and Maggie Morris finished with nine kills.

“I feel like at moments we won the serve and serve-receive battle, and that was a focus, but we couldn’t control it for the whole match,” Schoolcraft coach Erin Onken said. “I think we stayed as aggressive as we could. I thought Allie and Maggie really stayed aggressive attack-wise today. Kelby made some great saves back row for us. All in all, we just got beat by a great team that had a great day.”

Schoolcraft advanced to the final without playing a Semifinal, as Saginaw Valley Lutheran was forced to withdraw from the tournament earlier in the week. Both coaches agreed that getting to play Thursday was an advantage for the Kestrels, but Onken said it didn’t affect the outcome.

“That was a disadvantage, for sure, but that’s not why we lost or why we played how we did today at all,” she said. “We should have been able to walk in here with the kids who started last year and played here last year, as many as we had starting on the floor today, we should have been able to come out with a little bit more steam. So, yeah, that stinks, but it’s not a factor for today.”

Of course, both teams had the experience of 2019 to draw from, and it was something the St. Mary players also valued.

“You never can really prepare to play in a gym this big under the lights,” Haut said. “Usually, it’s a lot louder, so that was definitely different than last year. But when you play a game in Battle Creek before, it definitely helps you.”