BATTLE CREEK – With 10 seniors on the roster, it’s fitting this year’s version of the Lake Orion volleyball team was the one to bring the school its first MHSAA volleyball title.

And while they’re plenty talented, that group brought a trait coach Tony Scavarda said was the difference in getting his program over the top:

“We’ve been in situations this year several times where we were down late in sets, and they don’t stop playing,” Scavarda said. “Even the set we lost tonight, they could have just said, ‘Eh, we’ll win the next set.’ But no, they came back, it was 23-24, and fought even to the very end of that set. They’re very resilient, gritty, and they don’t let any set go without a fight.”

“Honestly, it just feels unreal,” Macaulay said while hugging the championship trophy. “Being here for four years and on the team and losing the last three years, it feels so good to end on a winning streak and not with tears this year. It’s exciting, it’s really exciting. It still hasn’t hit me yet.”

The Dragons (68-6) not only brought home the first state title in school history, but became the first team from the Oakland Activities Association to win at the Finals level, something Scavarda learned at the post-match press conference.

“We knew it was the first ever for Lake Orion, which was a pretty big accomplishment. But to be the only one from the OAA, seeing that it’s one of the toughest leagues year in and year out in the state, that’s surprising,” Scavarda said. “But I knew these guys had it in them. It was just a matter of putting it together at the right time.” 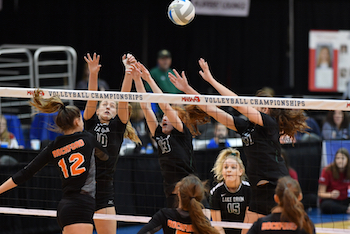 After controlling much of the first set, Lake Orion found itself trailing for much of the second. That’s when it decided to lean a bit more on Briggs, who had 10 kills in the frame.

“My whole thought was Wren really likes to spread the ball around, and it opens Paige up a lot of times,” Scavarda said. “I specifically told her though, I don’t care if Paige’s legs fall off tonight, I want to take this in three. She can rest tomorrow and the next day. We gotta get that second set. That’s a big momentum thing; even though they got that third set, we knew that we were still up 2-1. It’s still a nice little cushion to have.”

Rockford (47-12-1) didn’t relent in the third, leading for much of it before holding Lake Orion off late.

“We’ve been in that situation a couple times before, and they handled themselves very well,” Rockford coach Kelly Delacher said. “They continued to fight throughout that third set, and did a good job of squeaking out a win there.”

But Lake Orion grabbed control of the fourth set early, and kept Rockford at arm’s length throughout before closing the match, fittingly, with a kill by Briggs, assisted by Macaulay.

“I feel like our team is really good at being calm in those tough situations,” Lake Orion senior middle blocker Leigha Boes said. “Especially when it’s close, we really don’t hear the cheering and the crowd and the other team.”

Senior libero Ciara Livingway had 13 digs for the Dragons, while Boes had nine kills. Kendal Robertson added six kills and four blocks, while Sydney Smith had seven kills and 11 digs.

“I’m super proud with how my team played,” Delacher said. “It’s not an easy thing coming out and playing under bright lights and cameras and a big, huge crowd from your school, and I thought they performed very well under the pressure throughout the whole tournament. Lake Orion is a very good team, and they’re a very deserving champion.”