They will leave having put it in the same place.

Led by a deep and talented senior class, the Irish defeated North Branch 25-17, 25-17, 25-12 on Saturday at Kellogg Arena to claim the MHSAA Division 2 Finals title.

“It’s awesome,” Bloom said. “We’ve had this goal since the beginning of the season, and it’s awesome to have that final feeling, and to go out with a bang.”

The title is the fourth for the Irish, and first since 2017, when the Class of 2022 was in the eighth grade. Notre Dame Prep has advanced to the Final Four in each of the past four seasons, and was a finalist in 2018. But the promise of this class was truly met Saturday as it capped off a remarkable 64-1 season by hoisting the Finals trophy.

“It’s so hard to do,” said Notre Dame Prep coach Betty Wroubel, who has coached all four Finals champions. “I don’t think people realize how hard it is to get this far and win. Anything can happen along the way. You need a little bit of luck, you need a lot of skill and you need a team that's going to persevere through adversity no matter what – injuries, officials calls or other teams that get hot against you – it doesn’t really matter, you have to be able to overcome that. I think this team’s mental toughness was awesome.”

The Irish, who are ranked fifth nationally and handed Division 1 champion Bloomfield Hills Marian its lone defeat, featured nine seniors. While standouts such as Bloom and Aly Borellis and Bianca Giglio deservedly get a lot of the credit, it was a late moment when reserve senior Leah Greif was inserted into the match and able to be on the court for the final points that garnered some of the loudest applause. She made it count with a perfect pass that led to a point. 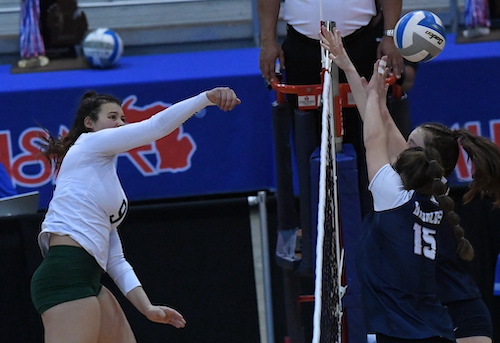 “It’s awesome, because they work their butts off all season, too, along with all the starters,” Bloom said. “I think they definitely deserve a chance, and it’s awesome to see them succeed in a game like this.”

Bloom led the Notre Dame Prep defense with 20 digs, while Borellis led the attack with 17 kills and 13 assists. Giglio added 10 kills, while Margo Sudzina had 19 assists, and Elyssa Wallace had 17 digs.

While the Irish were senior-led, North Branch (46-9) was led mostly by its sophomore class.

The Broncos will graduate a single senior – Gracie Hyde – and the experience gained on the weekend is something coach Jim Fish believes will be of great value for the program as it also looks to get back to the top of Division 2. North Branch has won three titles itself, the latest coming in 2016.

“You can put it on the calendar; we will be back next year – we will be here,” Fish said. “They got a taste of it, we had a great weekend, we had a great time in this match. When the third game started, I told them, ‘Ladies, I’m having the time of my life and there’s nowhere else I’d rather be. So, let’s just enjoy this.’ Our 10 sophomores against their 10 seniors, that’s two years difference. We played OK; they’re just a very good team. I give them all the credit, they’ve earned it, and they’ve waited four years to get it.”

Adrienne Greschaw had 19 assists for North Branch, with Natasha Bickel (seven) and Kaela Chingwa (six) leading the team in kills. Hailey Green had 18 digs for the Broncos, and Alana Deshetsky added 15.

“I would love to play them at full strength – that's not an excuse,” Fish said. “My outside (Deshetsky) couldn’t jump, she has two bad knees. My defensive kid (Hyde) couldn’t move. The result might be the same, so I’m not taking anything away. We knew we were up against it, we knew they were skilled at every position and it was a tall task. We had a great night (in the Semifinal win against Lakewood), and that’s what we’re going to rest our head on. They want to be here next year. They’re already talking about it.”