BATTLE CREEK – For most programs, a five-year gap between MHSAA Finals appearances is a sign of incredible strength.

For Battle Creek St. Philip volleyball, it must have felt like an eternity.

“I think it’s about time we got another one for Coach (Vicky) Groat,” St. Philip senior Harleen Deol said. “It’s been a dream since fifth grade, so it’s a dream come true my senior year.”

St. Philip dominated the sport after the turn of the century, making 15 straight Finals appearances and winning 10 titles – including a record nine straight – from 2002-15.

“I think in the past – I don’t think our team would take it for granted – I think our supporters took it for granted,” said Groat, who has now won 11 titles as St. Philip coach. “I’ve had many people say, ‘Oh, you’re always going to win state. St. Phil, we’re tired of St. Phil, they recruit.’ We don’t recruit, our numbers are going down – we have 10 total players in our program. … We preach about it at the start of every year, our goal is to win a state title. That’s what you want to strive for, and these kids believed in it.”

It took everything the Tigers had to get No. 21, as Oakland Christian pushed them deep into the fifth set. The back-and-forth final frame ended with a Lancer attack going long, followed by St. Philp jubilation.

“It was mentally and physically draining,” said St. Philip junior Brooke Dzwik, who had 37 kills in the match. “But at the end of the day, when you work your tail off and leave it all on the court, it makes the reward so much greater. We were able to do it for our senior, Harleen, and we reminded the youngers of that multiple times in the huddles. Everybody just was working, and that helped.”

Groat looked to the sky before being embraced by her assistant coaches.

“It feels like the first time,” Groat said. “I’ll never forget (2005), that was my first title as coach, but this is extra special, with the break (because of COVID-19).

Volleyball teams, and all fall sports teams, paused activity for nearly two months because of rising COVID-19 metrics. Teams returned to practice two weeks ago and restarted the tournament with Quarterfinals on Tuesday. 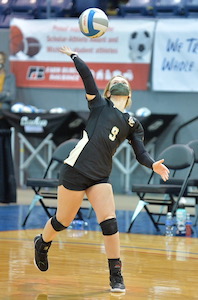 Early on Saturday, it didn’t appear as if St. Philip would have much trouble collecting title No. 21. The Tigers rolled through the first set, winning 15 of the final 16 points. While the second was tighter, it was never in doubt, as Oakland Christian didn’t have any answers for the Tigers’ attack.

Midway through that set, after a back-row attack found a hole in the back of the Lancers’ defense, Dzwik had her 13th kill of the match. Oakland Christian, meanwhile, had scored 14 points as a team.

“She did all right,” Groat said with a laugh. “Brooke has been our main hitter this year, and today we kind of relied on her a lot. Besides Brooke, Harleen in the middle played a great game … to complement Brooke. But Brooke is an outstanding volleyball player. She sees the court so well, she wants it so bad, she pushes her teammates. I preach we’re a team, it’s not about individuals. We have 10 girls out there who bust their behind and help Brooke out.”

Oakland Christian flipped a switch in the third set, however, winning a back-and-forth affair to extend the match. They kept that momentum going in the fourth, turning what had looked like a St. Philip walkover into a toss-up.

“I didn’t want them to go down like this,” Oakland Christian coach Brian Theut said. “We’ve been through a lot of stuff this year, and this wasn’t how we were going to end it. Today, what was that final chapter going to be in the book that we wrote this year. I knew our seniors deserved a better way out, so I just kept telling them to hang in there. That third game, I knew if we could just get one, get a couple points in a row, I knew we had it. I just wanted to give us a chance, and that fifth set, it was anyone’s game. I wanted us to compete and show that we could.”

“I am extremely proud of my team,” Page said. “This has been our dream, our goal, and we got to where we wanted. We may not have gotten the outcome we desired, but we laid it all out on the floor, every single girl – our whole bench, all our fans, our parents. We are so incredibly blessed to be where we are now, and that’s all I could ask for. Of course I want to win, but I’m proud of how we played.”

Dzwik added 32 digs to her match-high kill total. Rachel Myers had 51 assists, while Bailey Fancher had 29 digs, Kate Doyle had 20, and Deol had 16 kills.