Rylee Zimmer lightened her winter workload during her sophomore year, taking the basketball season off to focus more on volleyball.

It turned out to be a short-term move.

“I could make it to some of the games still, because I wasn’t quite as busy,” the Unionville-Sebewaing senior said. “But when I watched them play, I missed it, so I came back to play.”

Zimmer has finished her high school volleyball career and signed to continue playing the sport at Saginaw Valley State University. But her days as a Patriot are not over, as she is currently playing basketball, and in the spring will come back to her familiar spot on the softball diamond, where she is a returning all-state selection as a shortstop.

“I actually think (playing three sports) does help me,” Zimmer said. “Like in basketball, we’re working on jumping and we run a lot. It keeps me more in shape.”

It’s no secret, however, that volleyball is No. 1 for Zimmer. She plays for the Five:1 club during the winter and spring, and is currently balancing school, the club and basketball season. Sub out softball for basketball, and you have her spring schedule.

“Actually, it works out pretty good, because for girls basketball, we play on Tuesdays and Thursdays, and I have practice on Monday and Wednesday,” she said. “After basketball and softball practices, I drive to Clio and practice until 9 at night. I don’t have much downtime.”

Zimmer was a four-year starter for the Patriots volleyball team, and this fall she led the team to its first MHSAA Finals appearance – where it fell to four-time reigning champion Bronson in the Division 3 title match.

“When we were in eighth grade, when Erica Treiber (a volleyball All-American at Tennessee) was on the team, we went to Battle Creek with my family (for the Semifinals), and I never thought I’d be able to make it there,” Zimmer said. “This year, my senior year, when we started playing I thought, ‘This team is pretty good and can make it pretty far.’ It was so exciting to be able to make it to the last game of the season.” 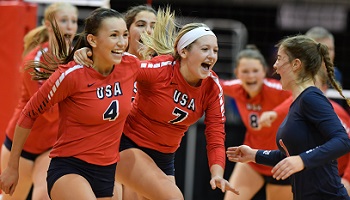 “Rylee is just an athletic player,” USA coach Teresa Rose said. “Last year, she was a captain, but this year she was a little more of a vocal captain. She never wanted to step on the seniors’ toes when she was only a junior. She’s very knowledgeable. She plays club at Five:1, she plays basketball, she plays softball – she's constantly doing something. Girls that only play one sport, they’re playing club, too, but they’re not using those other muscles you do while doing those other things. I think that really helps her be strong.”

Zimmer committed to Saginaw Valley late in her junior year, and signed during the early signing period in November. She said that playing at the next level was something she had dreamed of and thought could be a reality since she was moved up to varsity for volleyball as a freshman.

While playing three sports through high school has helped make her a better all-around athlete, she is looking forward to focusing on a single sport in college.

Rose also is excited to see what Zimmer can do at the next level.

“I’ve seen her play at this level, and she’s a standout,” Rose said. “To see her at the next level when she’s playing with everybody that’s that good, I can’t wait to watch her. Seeing her play with girls at the college level that are all volleyball players – that's all they’re doing – I think you’re going to see her be even more explosive than what she was this year.”

Before she moves on, however, Zimmer has more to do at USA. While the Patriots are 2-3 to start this season on the court, last winter Zimmer averaged 13.6 points and 9.8 rebounds per game to lead the team to the Class C Regional Final.