Before most high school students have blistered their fingertips on a hot Pop-Tart in a rush to get out the door and to school on time, White Pigeon sophomore Claycee West has already completed a rigorous cross country workout.

It’s not for love of the sport that West logs miles at 5:10 a.m. with longtime Chiefs coach Pete Mestelle. She doesn’t even like the sport. But with volleyball also demanding her precious time, the two-sport fall athlete gets in her workouts whenever she can. And in this case, it’s before the sun comes up.

When that doesn’t work with her packed schedule, she’ll squeeze in a run when the nets and the sun start to come down.

West, who had a phenomenal freshman year, which included a scholar-athlete award on top of three varsity letters and a trio of Berrien-Cass-St. Joseph Conference all-league team nods in volleyball, basketball and track & field, made the mature decision to tack on another athletic endeavor in order to see improvement in all the others.

“It’s just keeping me in shape,” said West, who also participates in club volleyball and basketball during the offseasons. “(Mestelle) really got me in shape for track season and he has put a lot of work into me. I couldn’t do anything without him. He’s helping me tremendously.”

It works both ways. Mestelle’s girls cross country teams in recent years have struggled to put enough runners on the course to register team scores. This year, though, the Division 4 Chiefs have more than 10 girls on the roster. West, with no long distance running experience, is already vying for the top spot.

She may not reap the same rewards right away as she did in her other sports, but West’s competitive nature won’t allow her to be just a participant.

“She is probably going to be our No. 1 or No. 2 runner,” Mestelle said. “It’s going to help her with her mind. It’s not just running; you have to think about what you’re doing. Her form has really come a long ways.”

West is grateful to Mestelle for making himself available so early in the morning and the commitment required to make playing two sports at once possible.

Mestelle made light of his pre-dawn pledge.

“It helps keep me young,” he said.

West is a middle and outside hitter for the volleyball team, she’s the returning point guard and leading scorer for the basketball team and she qualified for the 2017 Lower Peninsula Division 4 MHSAA Track & Field Finals in both the 200 and 400 meters last spring. Her time of 1 minute, 00.89 seconds in the 400 was good for seventh place and all-state status.

But cross country is an entirely new challenge.

“I love to win, and I’m very competitive,” West said.  “Honestly, at first (in cross country) I wasn’t trying to win. We had our first meet last week and I did OK. It killed me to see how I did compared to how I perform in other sports. I think that will change because I want to win. It’s hard for me because I dislike running, so it’s a mental challenge more than anything.” 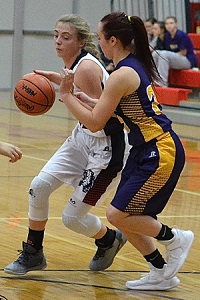 It may sound contradictory, but West claims the demanding schedule keeps her fresh mentally and physically.

“I think the biggest thing is that I don’t wear myself out,” she said. “I love what I do, but if I do one thing for way too long, I’m going to get tired of it. I love so many different things that it’s easy for me to change it up. It works out my body differently. I don’t overwork myself just in one area.”

In a time when the topic of sports specialization in high school is heavily debated, West is a case study in how a multi-sport experience has far more benefits than that of a one-track approach. And for a small school such as White Pigeon, that attitude is vital to fielding competitive squads.

“So driven,” White Pigeon girls basketball coach Brooke McClure said of West. “She works really hard. Anything you want in a kid, a student-athlete, she’s it. She’s been like this since she was a little girl. We’re really fortunate to have her. She inspires other girls to do better in school and in sports.”

PHOTOS: White Pigeon's Claycee West awaits a serve during a volleyball match. (Middle) West works to get around a defender during last basketball season. (Photos courtesy of Wes Morgan.)