KALMAZOO – Nobody was quite ready Saturday to definitively call this Dundee wrestling team the best in program history.

But simply being in the conversation says enough.

The Vikings put an exclamation point on a dominant season by defeating rival Richmond 44-18 in the Division 3 championship match at Wings Event Center. It was the third-straight title for Dundee, and the program’s 12th overall.

“It’s hard to say; I’ve been on two really good teams,” Dundee senior Christian Killion said, when asked if this was the best Dundee team. “If I have to say one thing, this was the funnest. I can’t say if it’s the best or not.”

The Vikings finished the season 23-1, won the Lenawee County Athletic Association title, qualified 13 of 14 wrestlers who entered the individual postseason for the MHSAA Individual Finals, and walked into Saturday’s Team Final not having given up more than nine points in a postseason dual.

To further their claim to the top spot in the program’s illustrious history, seven wrestlers are currently ranked No. 1 in the Division in their weight class.

Dundee showed off its power early in its dual against Richmond, which went up 3-0 after one match when Josh Barton won a 5-4 decision at 119 pounds.

The Vikings won the next eight matches to put the dual out of reach.

“You don’t control what weight you start at, but where we did, we knew they had a couple tough competitors there,” Dundee coach Tim Roberts said. “They had Austin Kilburn, who is very good, and Austin Fietz steps up and gets the victory there (at 130). Even Aiden Davis getting that major decision at 125. A lot of guys stepped up and made that run of eight straight there. Then it was important to keep working for bonus points. (Richmond does) such a good job of making it hard to get bonus points on them. They’re always very hard to score on, they’re very stingy giving up bonus points. I was really proud of the effort our boys were able to put in to do that.” 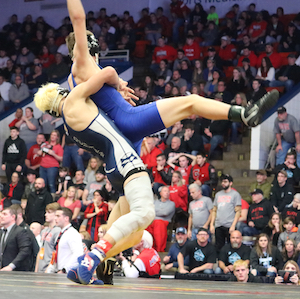 By the time the strongest part of Richmond’s lineup stepped on the mat in the upper weights, the Vikings had clinched the title.

“We knew we were going to have an advantage up top,” Richmond co-coach Preston Treend said. “We actually got great matches from our kids through the middle. Gavin (Resk), Caleb (Scalachtowicz), (Austin) Bergeon for a bit. We got great matches against their studs through the middle. We were hoping to just save enough points to get something to happen at the end. We needed to flip one or two of those.”

Dundee closed out the dual with a pin from Braeden Davis at 103 and a 6-3 decision from Kaden Chinavare at 112.

The Finals meeting was the ninth in 11 years between the two programs, which have accounted for every Division 3 title since 2010 (Dundee winning six, Richmond five).

“They’re certainly loaded, they’ve got seven No. 1 guys, but we’ve wrestled teams they’ve had before that have been just as tough,” Treend said. “That team we beat in 2015 was loaded. In 2010, they had four guys that ended up being high school All-Americans. It’s kind of the way this has gone – we're the scrappy guys that find a way to get it done, and they have these big guns. When there’s a lot of big guns, that’s tough to beat.”

While the season didn’t end with a title for Richmond, Treend was plenty happy with how his team performed.

Roberts, meanwhile, couldn’t have asked for much more out of his group.

“This team has been fantastic this year with the level they can compete at, and the level of teams that we’ve competed with,” Roberts said. “They had big goals. A lot of our teams, they like to compare themselves, ‘Who is the best Dundee team ever?’ It’s impossible to compare. They’re all my favorite team. But when the guys talk to each other, they all want to leave their legacy of, ‘No, we were the greatest team.’ These guys definitely wanted to do that, and they did a lot of things this year to have staked their claim.”

Dundee defeated Montrose 65-9 in the Semifinal, while Richmond defeated Alma 40-25.

PHOTOS: (Top) Dundee’s Casey Swiderski works toward a pin during his 135-pound match Saturday against Richmond. (Middle) The Vikings won 10 of 14 matches in the Division 3 Final. (Click for more from HighSchoolSportsScene.com.)