Chris Lilly could have plenty of thoughts racing through his mind as he goes through his senior wrestling season at Croswell-Lexington.

It’s his final year wrestling for his dad, Cros-Lex coach Joe Lilly, who has been in his corner since he began wrestling at 7 years old.

It could be his final year wrestling competitively period, as he’s not sure he’ll continue with the sport in college.

He’s a returning MHSAA Finals champion, having won the Division 2 title at 135 pounds a year ago, which has placed a target squarely on his back. Lilly is also the first Cros-Lex wrestler to ever have the chance to win a second title, as the school’s previous two champions – Donnie Corby and Collin Lieber – won as seniors.

But Lilly isn’t thinking too much about any of that. He’s just thinking about wrestling.

“I’m just going to do what I do,” Lilly said. “I don’t feel pressured. I just feel like it’s my last season, so I’m going to work hard, and the outcome will be what it is. I know I have the opportunity to (be the program’s first two-time MHSAA champion), and that’s another motivation. But I don’t think about it like that all the time. I just feel free. I feel like if it happens, it happens. I want it to.”

Lilly’s approach is working as he’s 24-0 on the season and recently recorded his 150th career victory. While the possibility of creating Cros-Lex history is in front of him, what he’s already done makes him one of the program’s greatest of all-time.

“That’s awesome,” Joe Lilly said. “That’s beyond words and beyond my expectations. That’s never been put on the plate that it was what the expectation was. The main expectation for my kids is to put their best effort into everything they do. To now see where he’s come with that is phenomenal.”

As noted above, Chris began wrestling when he was 7 and has been coached by his dad the entire time. But he has been around the Cros-Lex program essentially since birth.

“I was actually looking through pictures for graduation with my mom, and she kept pulling up pictures of me in (Dad’s) arms in the middle school gym with the wrestling team,” Chris said. “Ever since I was little, I was with him there.”

It was in sixth grade, Joe said, that things really started to click for Chris. That was the year Corby, a 2008 graduate, came back to coach after finishing his career at Central Michigan University. 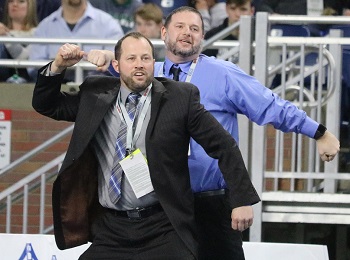 “I looked up to Donnie a lot,” Chris said. “I remember coming in when I was really little, and he’d mess around with me. When he went away and wrestling season would roll around, I’d always remember him and I’d look in the hall, look in the wrestling room and see his picture on the wall and think that I wanted to be that. When he came back, it made me want to buy in. Then (Lieber) comes around, and he was just another perfect role model for me. He was (a senior) my freshman year. He was a really good friend and role model.”

As a freshman and sophomore, Chris qualified for the MHSAA Finals but didn’t place. He entered last year’s tournament as a Regional runner-up with a 48-7 record, but battled through his bracket, defeating Madison Heights Lamphere’s Matthew Tomsett 6-3 in the final.

“If you would have told me that I was going to be a state champ my freshman year, I probably would have called you silly,” he said. “Honestly though, before states we were running in the wrestling room and I turned the corner and looked toward the door – that's where Collin’s picture and Donnie’s pictures are at – and that’s where I wanted to be. I felt like I had the stuff to do it. Checking into our hotel, the other wrestlers were there and I looked at every one of them and I wanted to wrestle them all in the lobby. I knew I could (win) it. We get there, and something just clicked. It was amazing. I felt like I couldn’t be stopped.”

While Chris was confident, it didn’t stop his dad from taking part in what has become a pre-Finals ritual of sorts.

“In all of my state championship matches that I’ve had kids wrestle, I’ve thrown up before we stepped on the mat,” Joe Lilly said. “In all three of them. With Chris, I was thinking I was fine, then they called his name and I threw up in the garbage can and went and met him at the mat. The component of it being your son, it’s a whole new dimension. But actually, once we got wrestling, it was the same as coaching him all year.”

Chris has a video saved on his phone of the post-match celebration, when the emotion of the moment started to hit and he jumped into his dad’s arms. It’s a video he said he watches every night.

“I feel like I still have something to prove,” he said. “I feel like people kind of doubt it. I was ranked seventh, and they say it was a fluke. I have to go back, and I have to prove it wasn’t.”

To do that, he’s focused on keeping things normal and not worrying about all that surrounds this season.

“It’s business as usual,” Chris said. “I get in the room and do what needs to be done. We work hard, but I kind of try to keep it light. That’s been kind of my key this year, is to have fun, like I did last year.”