With second overtime running out, and Goodrich’s realistic chances of winning a Division 2 wrestling championship in the balance, Blake Coffell knew he had to move.

The senior heavyweight diagnosed the situation in his head – an escape would likely force an ultimate tiebreaker, and since it was Lowell’s Tyler Delooff who had scored first in the match, Delooff would have the choice. That wouldn’t do, Coffell thought, as Delooff would probably get away and win the match.

So Coffell went big, sitting out to work toward a reversal rather than standing up. It worked, and as the final seconds ticked away, Coffell had picked up a key victory and kept Goodrich within striking distance of the five-time reigning champions.

“I was facing the whole crowd at the time,” said Coffell, remembering the moment from Feb. 23. “Hearing the noise from our side was just really insane.”

The dual meet eventually went Lowell’s way, and while the loss stung and initially dulled the insanity of that moment for Coffell, it couldn’t take away from all he had gone through to get there.

Almost four months earlier to the day, Coffell underwent surgery to repair severe damage to his knee. And practically every day in between, he worked and focused on being in that moment at Wings Event Center in Kalamazoo, despite how improbable it all seemed at first.

“We talked a lot about, ‘What’s your legacy going to be for Goodrich wrestling?’” Goodrich coach Ken Sirignano said. “We talk about the people in the past, and what we remember them for. Blake Coffell has a great legacy, coming back and doing what he did for the team.”

‘I know that scream’

On Sept. 28, Goodrich played Flint Hamady in a nonconference football game. The Martians were on defense, and Coffell, a defensive lineman, flushed the quarterback from the pocket. After what he had deemed a futile chase, he started to slow down, and that’s when he noticed an offensive lineman bearing down on him from behind.

“I’m a big guy, so I thought, ‘I’ll take him on,’” Coffell said. “I lowered my shoulder a little bit, but with him being up so much taller than me, he hit me up high. I planted, he hit me with all that speed and took me over my knee. I felt that pop instantly, and I started screaming. My friend tore his ACL last year, and I know that terrifying scream. Instantly, I knew what happened.”

Coffell had suffered a torn ACL, MCL, PCL, lateral and medial meniscus, and a fractured knee cap. His football season was clearly over, and the extent of the injury meant that wearing a brace and wrestling through it was also out of the question – especially with a scholarship to wrestle at Lake Erie College already in his future.

Surgery was the only option, even though it meant the two-time all-stater would likely miss his entire senior wrestling season.

“The first person I texted that night (were Lake Erie coaches Jeff Breese and Andrew Bearden),” Coffell said. “I told them about it and said, ‘Is this going to affect my scholarship?’ I got a text back in the morning and they said, ‘We still want you. Don’t worry about it. Get the surgery, and get ready for college.’

On Oct. 25, Coffell underwent surgery to repair his knee.

‘I’ll be back for team states’

The Monday after surgery, Coffell couldn’t make it through the school day. It was midweek before he managed that feat.

“That’s when I crutched in (to Sirignano’s office) and said, ‘I’ll be back for team states,’” Coffell said. “He said that it would be great if I did, but that he couldn’t put all his faith on that.”

Sirignano explained to Coffell that he would hope for the best, but at the same time he would have to plan for the worst, something Coffell said he understood.

“We thought when he had surgery, that put him at not even four months from team state,” Sirignano said. “The fastest recovery we’ve ever had was James Penfold, who came back in four months the year before. We had no expectation that (Coffell) would make it back, so we kind of aligned our team in that way, which put everyone up a weight.” 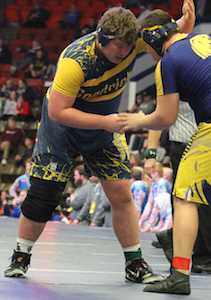 While Coffell used Penfold’s quick recovery as motivation, sitting out as his teammates practiced and competed wore on him. He said that he was depressed, and that it even affected his school work for a while. But he remained plugged into the team.

“What I would do is I would go to practice for a while when I was still on crutches and watch all the new kids and try to help them,” Coffell said. “That’s when my friends got on me and said, ‘If you can’t practice, you might as well go lift.’ That’s how I took a lot of my anger out. That’s the only way I could take my anger out.”

To further complicate things, the doctor appointment Coffell had circled on his calendar four weeks prior to the MHSAA Finals had to be rescheduled because of the weather. And when he did make it in, the initial news wasn’t what he wanted to hear.

“I went into the room and sat down and was talking to him, he did some tests on my knee and said, ‘It’s looking great. You’re about halfway there,’” Coffell said. “I said, ‘I don’t have time to be halfway there.’”

After some discussion, the doctor informed Coffell he would be cleared to wrestle with a brace.

“I was about to fall down and cry,” Coffell said. “He said to take it easy for the first week and wear a knee brace, and that if I didn’t take it off, I was cleared to wrestle. I hugged him. I was emotional at the time. I remember walking out of there and closing the door and basically screaming. I was so pumped to have that doctor’s note saying I was cleared for wrestling with a brace. I sent a picture of that note to the whole team.”

“I was like, that doesn’t even make sense,” he said. “We had three weeks, so we had to see what kind of shape he could get into. It was rough at first; that first week was rough. He had to kind of change the way he wrestled a big, so we were kind of figuring it out as we went.”

Coffell’s clearance also came in time for the Individual District, but that was an idea that wasn’t discussed for long.

“My trainer at my school, she didn’t think I was ready, and I kind of agreed,” Coffell said. “That wasn’t the goal. The goal was to be there walking out of that tunnel in Kalamazoo. That was the goal. That's what I said I would do. If I get hurt trying to pursue an individual state title, that wasn’t the goal. I wanted our picture on the wall.”

Coffell’s return did come earlier than anticipated, however, as the Goodrich coaching staff decided they could need him to defeat Croswell-Lexington in the Team Regional. Coffell had already planned to weigh in that day, so he could have the two-pound allowance at the Team Finals. During his recovery, he had weighed as much as 315 pounds.

“I was eating my sub after weighing in, drinking Pedialyte, drinking water and (Sirignano) comes up to me and says, ‘You’re wrestling today,’” Coffell said. “He said, ‘If you hold your knee or mess with your knee and it looks like it hurts at all, we’re going to pull you.’”

As Coffell started warming up, the anticipation swelled in the crowd. When he checked in and stepped on the mat, it exploded. When he won by pin in the first period, Goodrich had all of the momentum it needed to make it through.

“It was one of those things where no one really expected him to wrestle,” Sirignano said. “When we put him on the mat, the crowd just went crazy. That was as crazy as I heard our crowd all year.”

Coffell also received a void that night, and with three wins at the Team Finals, he finished the season 5-0. Two of those wins – over Delooff (fifth) and Brian Soto of Niles (seventh) – came against wrestlers who would go on to place at the Individual Finals.

While the caliber of opponent he defeated was impressive, it was how it happened that impressed Sirignano most.

“I think the most amazing thing about it was that on three weeks, he won in double overtime against the Lowell kid,” Sirignano said. “Blake was exhausted, I’m sure he was, but I don’t know if it was just mental toughness or what.”

Coffell said the pride of making his improbable return was overshadowed by the team’s loss in the championship match. But it is something he recognized.

He had to endure some more sadness the following week, as he was forced to watch the Individual Finals when he knew he belonged at that level.

“I think I cried both days when everyone started leaving,” Coffell said. “I went and sat up in one of the top rows away from everyone else. I had my head down, and I was crying. Knowing we could have had three finalists, eight qualifiers and eight placers if I wrestled.

“That’s when I started thinking again, ‘You’ve got college.’”

After going through a whirlwind of emotions and physical exertion over a four-month span, Coffell learned plenty about himself – mostly that he was never alone.

“Ken says that if I didn’t wrestle, we wouldn’t have had that shot, but it wasn’t just me that stepped up. It was the whole lineup,” Coffell said. “It was Sam Fisher going down to 152, Honour (Kline) going down to 189. Ryan Angelo, our 103-pounder, he got so much better. Having all those hard workers behind me, it really boosted me. Knowing all these guys are always going to be family, that just makes me really grateful to have Goodrich wrestling.”

PHOTOS: (Top) Goodrich’s Blake Coffell looks to the fans after his win during the Division 2 Final against Lowell at Wings Event Center. (Middle) Coffell wrestles DeWitt’s Anthony Munoz during a Semifinal. (Click for more from HighSchoolSportsScene.com.)