Oftentimes a coaching change is accompanied by the need to restock talent in order to rebuild.

That certainly wasn’t the case for first-year Mendon wrestling coach Caleb Stephenson, who took over for his father, Art, this winter.

Not only were the raw materials in place for the Hornets, as it turned out, some of the newbies weren’t that raw at all.

Already polished after having competed in national tournaments since the third grade, Skyler Crespo ripped through his first varsity season with only one loss en route to an MHSAA Division 4 championship at 125 pounds this past weekend.

Entering the tournament seeded No. 1 in his weight class, he expected nothing less.

Becoming the first freshman in school history to win a Finals championship, Crespo crushed it in his first appearance at The Palace of Auburn Hills, finishing 4-0 and atop the all-state podium. His final record for his rookie season was an astonishing 52-1.

Just like he did in the Regional Finals, Crespo, one of only two freshmen in the bracket, edged reigning champion Robert LeFevre of Erie Mason in the championship bout, this time by a 3-1 decision.

A few scrambles between the two ate up most of the first period before Crespo snatched LeFevre’s leg and recorded a takedown. Crespo was called for stalling a second time in the third period to make it 2-1. He dodged a couple more shots and had an escape in the final minute.

Supremely confident all season, Crespo wasn’t distracted by all the hype surrounding the Palace atmosphere. His first-round match Thursday went off without a hitch — a pin in 1 minute, 58 seconds against Roscommon’s Deklin James.

In the championship Quarterfinals on Friday, Crespo earned a 13-7 decision against Jacob Brand from Burton Bentley.

“The biggest thing for me was just getting to the second weigh-in (after the Quarterfinals),” Crespo said. “Trying to watch my weight wasn’t the most fun. After that, I knew I was in really good shape.” 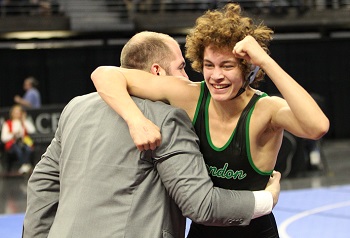 Crespo put on a show in the Semifinals, dominating Jacob Roberts of Leroy Pine River in an 18-3 technical fall to advance to the Finals. In the championship against LeFevre, both grapplers knew the other’s moves from the Regional match (a 2-0 Crespo win) and studying footage.

“Skyler wrestled a really great match from a match management standpoint, and controlled the situations he was in with composure,” Caleb Stephenson said. “LeFevre had a great game plan for us, but Sky stayed true to who he is and stayed confident in his offense and defense.

“Lots of people that see Skyler from afar don't understand the type of work that he has put in for years, both mentally and physically, that has prepared him for this moment. He has been all over the country pursuing great tournaments with his parents, who have dedicated so much to his success, so it may surprise some people, but it doesn't surprise those closest to him, because he's already chasing three more.”

It was a fantastic weekend for Mendon as a total of three grapplers were among the top-eight all-state finishers in Division 4.

Wyatt Cool defeated Hart’s Carlos Garza 6-1 in the fifth-place match at 160 pounds. The junior capped his season with a 48-4 record and second consecutive all-state finish.

Classmate Nik Andaverde also made it as far as the championship Semifinals before finishing fourth overall at 112 pounds. Andaverde ended the year with a 48-5 record.

Despite working on wrestling year round, Crespo competes in three sports at Mendon. He plays football and plans to tee it up for the golf team this spring.

“I always try to do something every day to get better (at wrestling),” he said. “It’s not always fun, but when you get rewarded like this, it feels good.”