KALAMAZOO – Brendin Yatooma was blocking out all of the noise Saturday at Wings Events Center.

The Detroit Catholic Central senior 215-pounder proudly hoisted the Division 1 MHSAA Team Wrestling Finals championship trophy over his head, a smile plastered on his face as the Shamrocks crowd roared in approval.

Yatooma and his teammates had just claimed the school’s fourth straight title, defeating Davison 34-23 in a match that pitted rival powerhouses and drew heightened emotions across an entire corner of the arena.

“It means a ton to us. It means a ton to the community,” Yatooma said. “Being able to come out here and make history, especially with how rich in wrestling we are as a school. Just being able to be remembered for that makes a huge impact on us. It’s something that we’ll never forget for the rest of our lives. It’s great.”

The title was the 14th in Catholic Central history, but this was the first time the school had won four in a row.

Emotions ran highest during a pivotal match at 189 pounds, which featured two of the state’s best wrestlers in Davison’s Alex Facundo and Catholic Central’s Manny Rojas. Facundo, a two-time Finals champion who has committed to Penn State, was leading 5-2 in the second period when he was called for an illegal move.

Rojas was evaluated on the mat for a concussion, and it was determined he could not continue. Because the injury occurred on the illegal move, Catholic Central was awarded six points for the match, which gave the Shamrocks a 23-18 lead.

“Not the way we wanted it, but without that, we still win that dual by two points,” said DCC coach Mitch Hancock, who added that Rojas had been taken to a local hospital for further evaluation. “The big guys up top stepped up. It’s unfortunate; our thoughts and prayers are with Manny. We just hope he gets better quick.”

Davison’s acting coach Zac Hall – who was filling in for longtime coach Roy Hall, who had been in a car accident and couldn’t attend but is said to be doing well – echoed his team’s disappointment with how the match concluded.

“You even saw it in the atmosphere – it was very back and forth, electric. Then once that happened, it was kind of eerie silent,” Zac Hall said.

“I hope Manny is OK. I know Manny, I’ve trained Manny. He’s a really good kid. Like I said, I just wish things would have worked out differently and I wish that it could have been handled on the mat.”

Catholic Central (20-3) clinched the dual in the next two weight classes, as Yatooma and Steven Kolcheff picked up pins at 215 and 285, respectively. Davison (20-3) got decisions from Aden Williams (103) and Caden Horwath (112) to close out the dual. 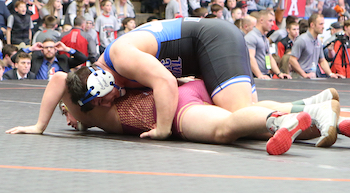 “I didn’t tell (Yatooma) anything. He’s a veteran,” Hancock said. “He pinned his way through the individual state tournament last year. You don’t tell him anything, just wrestle.”

The two nationally-heralded teams battled it out throughout the dual, which featured a total of 16 wrestlers who were ranked either No. 1 or 2 in their weight class.

Catholic Central’s Dylan Gilcher bumped up a weight and opened the dual with a 6-5 win at 119 pounds. Davison countered with a pin by Andrew Chambal at 125 and an overtime win from Kyle White at 130 to take a 9-3 lead.

The Shamrocks went ahead 13-9 after Josh Edmond won by technical fall at 135, and Camden Trupp won by pin at 140.

Davison won three of the next four, however, and led 18-17 heading into the Facundo/Rojas match. James Johnston (145) and Josh Barr (152) each won close decisions, while Max Callahan won 11-5 at 171. Catholic Central’s one win in between was a 5-1 decision by Derek Gilcher at 160.

“Being a part of this is just spectacular,” Yatooma said. “I’m just speechless. I don’t have any words to describe the entire situation. It’s just something that can only be experienced.”

Davison, meanwhile, will have to focus its energy on coming back next season and stopping the Shamrocks from getting a fifth straight.

“This is already an incredibly motivated group,” Zac Hall said. “Nobody really aside from our community really gave us a shot to do this at the beginning of the year. (Catholic Central) came in ranked third in the country, and our guys came in and competed. As the year progressed, we got better. I think we came out here and put one hell of a show on. You can see in these guys’ faces how much passion, time and effort we’ve really put into this year. We’ll come back with a vengeance.”