KALAMAZOO – Tony Greathouse has built one of the state’s elite wrestling programs at Brighton over the past six years.

Unfortunately for the Bulldogs, the state’s most elite program currently resides in their division.

“Especially this year, we took a big step up where we’re not just barely beating teams, we beat really good teams this year by 40 or 50,” Greathouse said. “Even this dual, even though we lost, the fact that we’re within 15 points of them – they might be the best team that’s ever come out of the state of Michigan. They’re pretty darn good.”

Catholic Central (26-1) finished the decade with seven titles and one runner-up finish. It’s a feat no Division 1 team has ever accomplished.

“You have to take your hats off to our guys; they work so hard,” said Shamrocks coach Mitch Hancock, who has led the program to each of those seven titles. “It’s not about me, it really isn’t. It’s about them and how hard they work. We have a standard at Catholic Central, and that standard is high. When you come to Catholic Central, you better be ready to work, you better be ready to perform in the classroom, pray to God and perform on the athletic field, and those guys live up to that standard every single day.”

The Shamrocks rolled through the postseason, not giving up a team point through the District or Regional, and rolling to 63-6 (Clarkston) and 56-9 (Westland John Glenn) wins in the Quarterfinals and Semifinals.

“We kind of look at it as, we don’t really have anything to prove,” Catholic Central senior Cameron Amine said. “We just have to keep getting better every day in the practice room and pushing each other in the practice room. And that nothing is ever given to us at all. You have to go out there and work for it and get it.”

The dual started in the heart of Catholic Central’s lineup at 140 pounds, and the Shamrocks jumped out to a 29-3 lead despite it being a strong stretch of the Bulldogs’ lineup as well. 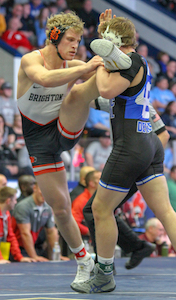 Brighton got on the board at 171, as River Shettler won by decision, but the Shamrocks rattled off four straight, starting with a decision from returning champion Easton Turner at 189. Brendin Yatooma (215) and Steven Kolcheff (285) also won by major decision, while Anthony Walker (103) won a decision.

Brighton rattled off four straight wins from 112 through 130, getting a major decision from Mason Shrader, a pin from Sam Freeman and decisions from Ben Manly and Eddie Homrock.

The Shamrocks closed the dual with another returning champion, Josh Edmond, winning by technical fall at 135.

“We start at 140, good luck with that, right?” Hancock said. “You got Gilcher, Amine, Davenport, then you go up top to our big guys – we just put a lot of faith in our big guys up top. They’re just a really, really good team, and we were just a couple points better at every weight. To me, that’s just a level of toughness, a level of focus and just some conditioning.

“Hats off to Tony, he’s built a power over there at Brighton.”

The matchups were ones Greathouse knew posed problems for his team coming in.

“We knew coming in that we were going to have to win some matches that we probably weren’t supposed to win,” he said. “We were facing some pretty formidable opposition there. Overall, I thought we competed pretty hard, but they’re better than we are. We had to be better than them today, and we weren’t. We lost by 58 points to them last year in the state finals, today we lost by 15, so we made a 43-point improvement over the last 12 months, so I think that’s something to hang your hat on. We beat the Division 2 state champ (Lowell), we beat the Division 3 state champ (Dundee), so we had a pretty great season. I’m proud of them.”

Hancock wasn’t just impressed with his stars, however, as his younger wrestlers came through for the team as well.

“Anthony Walker I think was the key of the match, his big win down low,” Hancock said. “Logan Sanom, I’m not sure if people expected him to wrestle in that dual but he came out firing. Those two guys really stood out to me, and then up top Brendin Yatooma who beat (Luke) Stanton. Stanton is pretty dangerous on top, so for Yatooma to take him out the way he did was pretty cool.”

PHOTOS: (Top) Kevon Davenport was one of nine bout winners for DCC in the Division 1 Final on Saturday. (Middle) Brighton's Greyson Stevens, left, and DCC's Easton Turner wrestle at 189 pounds. (Click for more from HighSchoolSportsScene.com.)