The Hudson coach had nervously watched his team win a handful of Division 4 titles, each time exploding with energy after a clinching late victory. On Saturday, however, Marry was able to reflect a bit as his team locked up the championship a little more than halfway through its title match against rival New Lothrop.

“It is so fun to win them at the last second, but it’s also fun to watch these kids as they came off the mat one at a time to get to experience them experiencing a state title as a team,” said Marry, who was still plenty excited. “So I slowed it down, and I got to take in some really cool moments with some kids one on one. It was kind of neat.”

Hudson defeated New Lothrop 51-13 at McGuirk Arena on the campus of Central Michigan University, claiming the school’s sixth Division 4 wrestling title, and first since 2013. The Tigers had finished runners-up to New Lothrop in each of the previous three seasons after winning five straight titles from 2009-13.

“It’s great. It’s amazing. It’s breathtaking,” Hudson senior 215-pounder Zack Bailey said. “It’s hard to explain unless you do it. We wanted it to be (New Lothrop). We wanted a little bit of revenge.”

Bailey and Tylor Grames are the only two seniors on the Hudson roster. While they’re certainly key pieces, they know they’re leaving behind a team that’s capable of making a 10th straight appearance in an MHSAA Finals title match.

“It makes me feel like the next couple years are going to be very strong,” Grames said. “Very strong.”

It was Grames and Bailey who started out the dual with a bang for the Tigers, staking their team to a 9-0 lead.

Grames, who is ranked No. 2 at 189 pounds in Division 4 by Michigan Grappler, opened the match with a 5-1 win against the top-ranked wrestler at his weight, Erik Birchmeier. Takedowns in the second and third periods were enough to give him the mini upset and give his team momentum early on.

Bailey wasted little time in building on the momentum, getting a pin in 19 seconds at 215 pounds. 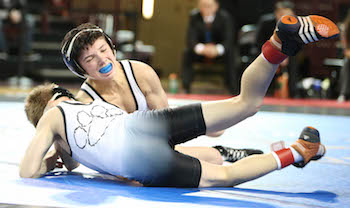 “I felt really good about (starting the dual at 189 pounds),” Marry said. “With my Grames kid being ranked second in the state wrestling their No. 1 kid, we knew it was going to be close enough for us to win. We had a really good matchup at 215 and heavy, and we were really solid from 112 to 135. I thought that could be almost too much for their lineup to come back from. I think that kind of did them in. I think we got the momentum, and I think you start losing doubt.”

It indeed was too much for New Lothrop to come back from, as Hudson won six of the next seven matches after their seniors set the tone, building a 36-4 lead and clinching the title with five matches remaining.

“I felt like I’m on top of the world,” Grames said. “For the last half hour, I’ve been sitting here happy.”

Isiah Krizek won a 7-0 decision at 285 for Hudson, and after Logan Wolford put New Lothrop on the board with a 9-1 major decision at 103 pounds, Hudson got three straight pins from Tucker Sholl (112), Tyler Curtis (119) and Jordan Hamdan (125). Scotty Torres won 4-0 at 130 pounds for the Tigers, and Carson Price clinched the team victory with an 8-6 decision over second-ranked Austin Wolford at 135.

Justin Carnahan won by pin at 140 pounds for New Lothrop, while Zack Riley won a 5-2 decision at 152.

“Part of coaching at New Lothrop is that’s our goal – to get here each year and give ourselves a chance to win it,” New Lothrop coach Jeff Campbell said. “I absolutely think we’ll have a shot in the future, we’ll be stronger and we’ll learn something from what happened today.”

Like Hudson, New Lothrop is remarkably young. Twelve wrestlers who took the mat Saturday for the Hornets could be back next season, meaning the Division 4 titans who have claimed the last nine titles (six for Hudson, three for New Lothrop) will likely be the teams to beat again in 2018.

Hudson entered the weekend as the top seed and top-ranked by Michigan Grappler. New Lothrop, unranked at the end of the regular season, was seeded sixth this weekend but downed third seed Carson City-Crystal and second seed Leroy Pine River to reach the Final.

“When you’re wrestling against Jeff Campbell’s group, it doesn’t matter whether you win or lose,” Marry said. “They’re going to bring it, we’re going to bring it; we’re not counting wins and losses against these guys. It’s really not that type of rivalry. It’s a classy rivalry; it’s a rivalry of respect. We just said to each other out there, we hope to see each other again next year out there.”