KALAMAZOO – All Josh Barr needed to do Saturday to clinch Davison’s second-straight Division 1 Team Wrestling Finals title was not get pinned against the top-ranked wrestler in the state.

The Penn State commit figured the best way to avoid that was just win.

Barr defeated Detroit Catholic Central’s Manny Rojas 4-3 at 171 pounds, winning a battle of nationally-ranked wrestlers and securing a 29-21 championship win for his team.

“Just believing in myself and my coaches,” Barr, a junior, said. “We train so hard every single day just for moments like these. I prepare for every single situation I could be in. I walked out there with full confidence in my coaches, God and my training and just let it take care of itself.”

It was the 10th Finals title for the Cardinals, who had defeated Catholic Central by a very similar 29-24 score a year ago. It was the third-straight year these two teams had met in the championship match, as Catholic Central won the 2020 title 34-23.

“It comes down to the last match every year it seems like,” Davison coach Zac Hall said. “But it makes for one hell of a ride. This one’s better than last year. I can’t believe it man. We had so many highs and lows this year. Every one of our starters was injured. Our heavyweight in that match, we couldn’t put his shoulder back in place. His shoulder was out of place for two thirds of that match, and he gritted a tough one out. Barr comes back and wins a tough match. That’s a testament to this team.”

Barr versus Rojas was a marquee match and fitting end to a dual between two of the state’s greatest all-time powers.

The match was tied at 2 heading into the third period, and Rojas, who is committed to Iowa State, scored an escape early to take a 3-2 lead. Barr was able to get a takedown in the final minute, and held off a reversal attempt from Rojas as time ran out. 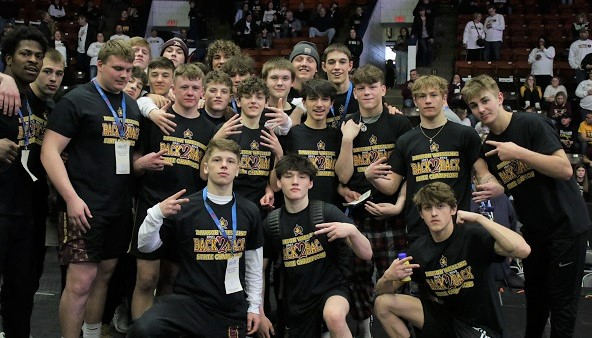 “There’s two sides to that, there’s the team score, and on the other side there’s a ton of history there,” Hall said. “Two of the best kids in the nation going at it. We’ve gone round and round with that kid. We’ll see him next weekend, and I told Josh, you’re going to see that kid in college. You guys are both going to go on and do great things. We wanted to win, though. I’ll be quite honest with you, I wasn’t thinking about the pin. I trust Josh through and through, and we went out there to win that match.”

A pin from Rojas was a big ask in that situation, and Catholic Central coach Mitch Hancock knew that as he sent his senior star onto the mat.

“Compete, have fun and wrestle hard,” Hancock said recalling his words to Rojas before the match. “If he gets in a position to put him on his back, so be it. Very few people in this building thought he was going to tech him or pin him. By the math we did on our side, if we had a chance, we had to upset Barr, otherwise he was getting five or six against someone else. So we went at him. Starting weight didn’t help us. But you know what, these guys fought hard.”

While those matches provided late drama, some early drama that went Davison’s way played just as big, if not a bigger role in the final outcome.

At heavyweight, Zane Richardson won 3-1 in overtime despite the aforementioned dislocated shoulder. That gave the Cardinals (19-4) an early 12-0 lead in the dual.

There was more drama at 112, as Davison’s Dominic Perez gave up a 4-0 lead in the third period, but was able to score a late reversal to claim a huge 6-5 victory for his team.

“That young man struggled to make (112) all year,” Hall said. “We got him down there a couple times, but we didn’t know if we could get him there again. He got down, he put us through a rollercoaster. You see how that dual goes, we get one at the last second at (112), they get one at the last second at (119), this one comes to the end. That’s what happens when you have two powerhouse teams like this going at it. Both teams have a will to win, they’re both really well-coached, and they just have tremendous athletes who give their heart and soul to this sport.”

The tight win at 119 went Catholic Central’s way, as Drew Heethuis scored a last-second reversal to defeat Justin Gates 2-1 in a matchup of returning individual champions.

Nathan Walkowiak (103) won by pin for the Shamrocks, while Clayton Jones (130) and Dylan Gilcher (140) each won by decision.

Davison advanced to the Final with a 67-12 Semifinal win against Macomb Dakota. Richardson, Horwath, Freeman, Payne, Barr, Cotton and Colley all had three wins on the weekend.

Catholic Central defeated Hartland 43-16 in its Semifinal. Heethuis, Jones and Gilcher all had three wins for the Shamrocks.