KALAMAZOO – Jeff Leach was in a familiar place as he stepped onto the mat with a chance to clinch the MHSAA Division 2 wrestling team title for Lowell.

In 2017, Leach clinched the Red Arrows’ fourth straight title with a decision against Warren Woods-Tower. And Saturday, he did it again, defeating Goodrich’s Carson Turnbow 9-2 to give Lowell a 29-23 victory and a state-record sixth straight MHSAA Finals team championship.

“It’s a lot of pressure,” Leach said. “Coaches were talking to me before because I was pacing back and forth with my nerves, but they reminded me, ‘Surrender the outcome. No matter what happens, put it all right where you got it, right here on the big stage.’ It’s my last time wrestling here, my last time wrestling a high school state, so I thought I might as well do it for them so they can keep the tradition going after I’m gone.”

Now the Arrows stand alone as the only program to accomplish the feat with the entire state competing together.

“Wrestling is a difficult sport,” Lowell coach R.J. Boudro said. “We have to take care of these kids’ weights, their grades, making sure they’re not injured, just making sure they’re mentally there – their girlfriend breaks up with them – so many things that could go wrong. To think of all those things that could go wrong, and we won six in a row, it’s just an amazing feat. I’m proud of the community, proud of the kids – it’s so cool.”

Four of the previous five titles for Lowell were decided by 10 points or more, and wrapped up prior to the final match – in some cases, well before. Only the 2014 title was decided by fewer points than this year, as the Red Arrows started their streak with a 35-34 win against the previous Division 2 power, St. Johns.

“Goodrich is a heck of a team,” Boudro said. “They brought everything they had. I feel like through the year, they were kind of working their lineup down to beat us. It kind of gave us motivation. Our guys showed up, and we had plenty of opportunities to win the dual in a lot of different ways, but I think we wanted to give the fans something to get a little nervous. They’re spoiled fans.”

Each team won seven matches in the dual, but Lowell was able to get a technical fall from Avry Mutschler at 140, a pin from Nicholas Kohorn at 112 and a forfeit to Austin Boone at 160. Goodrich, meanwhile, was only able to get bonus points at two weight classes, major decisions from Honour Kline at 215 and Cameron Macklem at 119. 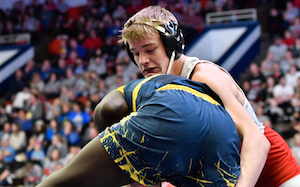 “I think the worst part about it is that we wrestled so well and tough and we came up short,” Goodrich coach Kenneth Sirignano said. “That’s the worst part. To come that close and come up short – we did that in 2016, we did it again today, and that’s the worst part of it. They should have been rewarded for what they did, but that’s life and that’s a life lesson. They’ve really learned a lot this year, and I’m really proud of them. I just wish they could have had it.”

Lowell went up 17-0 in the dual, getting decisions from James Fotis at 145 and Doak Dean at 152, along with Mutschler and Boone’s wins. Goodrich stormed back, however, winning the next four matches, as Kline’s major decision was surrounded by decisions from Juwan Vines at 171, James Penfold at 189 and Blake Coffell at 285. Vines won on a last-second throw, while Coffell won in double overtime.

“We pulled a lot of upsets, and we just tried to give ourselves the best shot to win,” Sirignano said. “The guys came through, and they won a lot of big matches. I would say they won five big matches.”

Lowell’s Ramsy Mutschler won by decision at 103, and that, combined with Kohorn’s pin, gave the Arrows a 26-13 lead with four matches to go.

The Martians won the next three, as Macklem’s major decision was followed by decisions from Carson Richards at 125 and Caleb Teague at 130. That set up the dramatic final match.

“We draw a weight class (to start the dual) an hour before, they drew 140 and I was like (yes),” Boudro said. “Two years ago, we beat Tower and it came down to him and he pulled it out. He’s got a lot to talk about for the rest of his life, being able to say he won two state titles in the last match of the dual. It’s pretty cool.”

Leach got out to a 5-0 lead in the match and had to hold off a pair of throws from Turnbow, rolling through one headlock that nearly put him to his back.

“It was more of a reaction,” Leach said. “My (practice) partners, some of them throw really good headlocks, so over the years, I’ve been pretty much practicing how to defend a headlock over and over.”

Lowell advanced to the Final with a 34-24 win against Gaylord in the Semifinals, while Goodrich defeated DeWitt 37-22.