Ben Modert’s road to three all-state wrestling seasons and two individual Michigan High School Athletic Association Division 4 Finals championships played out to a soundtrack of his own stomach rumblings and the clanging of silverware by those around him consuming everyday meals.

The Bronson standout blocked all that out to remain trim as a 103-pound freshman and sophomore, followed by a junior campaign at 112 pounds. It was just one of the many sacrifices Modert made to climb to the summit.

A sixth-place finish in the championships held at The Palace of Auburn Hills in 2017 propelled Modert into a sophomore season that netted 55 victories and a Finals crown at Ford Field. Last spring as a junior, he rattled off 52 victories en route to a championship at 112 pounds.

The hunger for a third title is certainly there, even though Modert made a decision to quell the physical cravings for more sustenance by bumping up to higher weight classes this year.

That’s not to say Modert believes the path will be any easier.

Wednesday’s Big 8 Conference dual match against Union City is a prime example. Though Bronson ended the night with a 36-30 victory, Modert experienced his first loss of the season. Fellow reigning Finals champion Brayton Mears, who won last year’s Division 4 title at 103 pounds as a freshman, edged Modert 2-1 in the 119-pound bout in one of the season’s early marquee matchups. Both grapplers entered the day undefeated.

“I decided since it’s my senior year to not cut much weight,” Modert, whose original plan for this season was to compete at 125 pounds, said before the year began and prior to settling on 119 pounds. “I just like to wrestle whoever and get the best competition. It’s more fun to me. I get more from losing than winning. It’s just better experience. It’s obviously upsetting to lose, but I’ll watch videos and want to see what I did wrong and still improve. 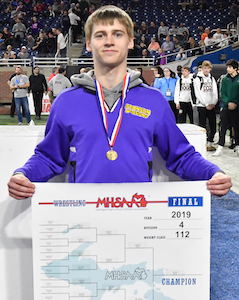 “I honestly like the target (on me) and people gunning for me. I like the competition like that. I know I have to keep my head in it still. Cutting weight makes it 10 times longer than what (the season) already is. Hopefully not cutting weight will help keep my motivation up.”

“He has definitely matured on and off the mat,” Bronson head coach Chad Butters said of Modert. “One of the things I admire about Ben is he really does a good job of seeking out the best competition. There were times he could have ducked some competition.”

Based on the few losses he’s experienced over the past two seasons, Modert’s recent defeat might be the cool breeze across the embers that will ignite another historic run. A loss last season to Clinton’s A.J. Baxter, who Modert beat at the 2018 Finals, led to Modert finishing out the year undefeated.

“Ben approached me and said he wanted that match (against Baxter),” Butters said. “He’s driven, and he wants to challenge himself. He’s constantly pushing himself. That was a good thing for him. I think he learned just because he won a state championship in the past, nothing is guaranteed. You have to work for it, and it has to be earned.”

Modert is ahead of pace to break former Bronson great Hunter Machus’s career school wins record of 207 (2013). Entering the year with 160 victories and having accrued more than 20 so far this winter, that feat might be accomplished by February.

With no plans to compete in college, Modert’s soaking in all he can as his decorated career winds down.

“This will be my 12th year wrestling, and it can’t go on forever,” he said. “I think it’s a cool thing to be in the record books to begin with. We have banners up for state championships. I don’t like to be glorified, but I like the recognition.

“(Butters) is a great coach and Tony (Turner) is great, too. They’re working with you constantly and doing everything they can. They are very supportive. It’s a huge wrestling family we have behind us. It’s so supportive, and they’re awesome and always there. We always have a huge crowd there cheering, and that’s a big part of (our success).”