DECATUR — When he was young, Coy Helmuth broke both sides of his collarbone and almost gave up wrestling.

Fritz Williamson’s brothers told him he’d never make it as a wrestler.

Helmuth and Kennedy were Division 4 Individual Finals runners-up last year and hope to build on their successes this year as seniors.

In fact, Jack Richardson, who has coached the Raiders the last four years, has seniors slated for 10 of the 14 weight classes.

Decatur’s team was seeded second last year but lost to Leroy Pine River in the Quarterfinals in a 35-34 nail-biter.

“That’s still fresh in my mind, and I think it’s fresh in the kids’ minds, especially the seniors,” Richardson said. “They were all extremely disappointed, but Pine River wrestled extremely well. They came out and they wrestled to beat us.

“We will use that as a teaching tool. Yes, we were sour about it. We wanted to win. We had high aspirations. Now we have to use it not as something that will hold us back but something that will push us forward. OK, this happened and what can we do to fix it.”

Richardson has a bit more breathing room this year, choosing from among 21 wrestlers to compete.

“We were relying on everybody,” he said.

One of those was Williamson, a senior this year, who surprised his coach with his versatility.

Although Williamson posted a 22-34 record, “He came within a match of being a state qualifier, and he hadn’t seen a varsity match in two years,” the coach said. 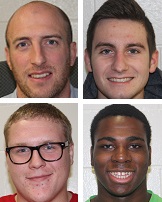 “He really, really came on at the end of the year and wrestled very well.”

Williamson said the fact his older brothers told him he’d never make it was the best motivation of all.

“I practiced really hard and worked really hard to get better,” he said. “Now I’m a pretty decent wrestler. People say I’m pretty good and they like to watch me wrestle.”

The senior, who was adopted from Haiti when he was 5 years old, has 10 brothers and sisters, all adopted, he said.

Helmuth, who had a 50-7 record at 119 last year, followed his dad, David, who wrestled for Dowagiac, then helped coach the team for a few years. David started his son out wrestling at a young age.

After finishing runner-up to Erie-Mason’s Robert LeFevre last year, Helmuth said he knows better what to expect this year.

The MHSAA tournament “is a different environment,” Helmuth said. “You’ve got thousands of people looking down at you, watching your match, other than the 16 who are usually involved.

“You walk out and see the one person you’re wrestling. You guys came out of the same region, and it’s just a completely different environment (than the regular season).

“This year, I feel like I could get myself ready for that Finals match better. I’m not expecting anything less. That’s one of my goals. Second isn’t good enough this year.”

A four-year varsity wrestler, Helmuth “lost in the blood rounds freshman and sophomore years,” Richardson said. “He made a big jump going into his junior year, more mentally than anything.

“He’s very analytical. Ninety-five percent of the people I’ve seen him wrestle that he’s gotten beat by, he has the ability to come back and adjust how he wrestles to have success.”

Kennedy said he is inspired by father, Jim, who was an MHSAA champ at Decatur in 1986 and started his son in the sport when Logan was 5 years old.

Logan’s three older brothers, Mitch, Zach and Austin, all placed at the Individual Finals. That’s an even bigger motivator for the senior, who posted a 51-6 record at 285 last year, losing to Laingsburg’s Kory Koenig in the Final.

“After (my brothers) graduated, they all focused on building me up,” Kennedy said. “Mitch wrestled at 125, Zach and Austin were heavyweights.

“Every time I step on the mat, it’s like a natural high to me. I feel like I’m floating on air when I wrestle.” 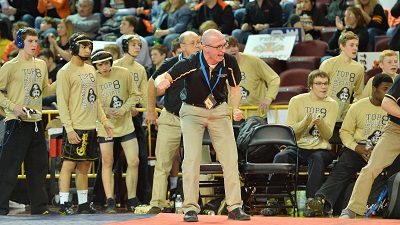 Durability is one of Kennedy’s key assets.

“Most of my matches I end up winning in the third period,” he said. “This year I am working harder than anybody else is working.

“My biggest fear is that someone else is out there working harder than me. My goal is every day to work the hardest I can work, to push my body to the limit.”

“He actually tore his ACL the summer before his sophomore year, and we didn’t know if we were going to get him back. He came back and helped our team get to the Semifinals that year.”

Richardson said there are reasons Decatur has had strong wrestling programs through the years.

One is that younger wrestlers learn from accomplished older ones.

“Hunter was a junior and senior when these seniors were freshmen, sophomores,” Richardson said. “You see the way he worked, which goes back to his brother Luke.

“I think with any successful program, those are the kinds of threads that bind. People who have success inspire the next generation through.”

Another reason is the makeup of the community.

“You have blue collar, hard-working people,” he said. “I think that’s what the sport’s built on.

“In a sense, when you have high expectations and that kind of background with kids, they’re not afraid to come in and work hard. If anything, with our sport, regardless of talent, regardless of ability, hard work is the foundation for success.”