It took a day for Tristan Vance to fully appreciate what he had accomplished.

The Clio senior won the Division 2 189-pound championship Saturday at the MHSAA Individual Wrestling Finals. Quite often, it takes some time before the gravity of the moment sets in. For Vance, that was partially true. But mostly, he was too sore to celebrate in a big way.

“That night, I was happy about it and celebrating about it, but I was so sore,” Vance said. “My back started spasming up right after the match. I was just so sore. I wanted to get home, and I wanted to rest. The next day, I was ecstatic.”

The spasms were nothing new to Vance, but rather a painful reminder of what he had to endure to get to this point. He missed more than half of the season because of them and didn’t return to the mat until the postseason.

While Vance himself wasn’t showing the elation and emotion that comes with overcoming what he did, his coach and father, Tony, certainly was understanding of the achievement.

“All I wanted to do is find my wife in the stands and give her a hug and kiss,” Tony Vance said. “It was the best feeling I think I’ve had since my kids were born. I got excited, and I kind of walked to the middle of the mat looking for her. I didn’t know where she was at, then I saw her waving to me. I climbed the wall and gave her a hug. It was such a struggle for him, and so much for us, too.”

The pain started late in the summer for Tristan, but it stemmed from a surgery he had as a 12-year-old. Back then, he was having back pain that effected the way he was walking. After consulting with multiple doctors, a benign tumor was found on his spine.

“I thought I had cancer, and I thought I was going to die – for like 10 minutes,” he said. “Until my mom was like, ‘That’s not what it is.’ After that, I’ve always been kind of chill, not too worried about things.”

The surgery to remove the tumor was successful, but that wasn’t the end of Tristan’s problems. He said he suffered from nerve damage and sciatica. His muscles were still tight, and he had to undergo rehabilitation for his left hamstring.

Eventually, he improved and blossomed into a star athlete at Clio, playing quarterback and linebacker on the football team and earning all-state honors (eighth place) on the wrestling mat as a junior.

That’s what made things even harder when the back pain returned.

“In middle school, none of that mattered to me,” Tristan said. “This year, it really kind of hit a soft spot. I was really depressed about it. I was kind of sure that I wasn’t going to be able to do anything.”

Tristan thought he had another tumor, but that was quickly ruled out. He was told that the smaller muscles around the hole where the tumor used to be were weakened and never fully recovered. The bigger muscles in his back were overcompensating, causing the spasms.

He decided, however, to play quarterback through the football season, even though he ran the ball a lot in Clio’s read-option offense.

“It got so bad where he couldn’t even run sometimes in games,” Tony Vance said. “He would play until he couldn’t play anymore.”

The motivation for Tristan was to play his final season with his friends on the football team. He did admit, though, that if he felt his wrestling season was truly threatened, he may have stopped.

When wrestling season began, the thought was to take things slow. Tristan returned to the mat in January, but his back acted up again in the New Lothrop tournament, and he was once again forced to sit.

“When I had to stop wrestling, it wasn’t because of the pain. It was because my muscles would contract and spasm, and I wasn’t able to do it physically,” he said. “It hurt my feelings. I was like, I don’t know if I’m going to be able to finish the season. I had four other guys on the team that ended up going to the state tournament with me, and I was seeing them do well and I was happy to see that, but I wanted to be part of that so bad.” 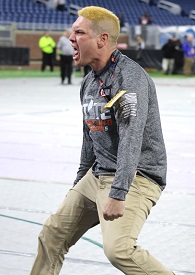 Tristan helped his teammates in the practice room, though he wasn’t sure if he would be able to compete again. As the postseason drew near, he began working out more and preparing for the possibility. The decision was made to put him into the lineup during the Team District and see how he held up.

“We ended up holding him out as long as we could,” Tony Vance said. “He wrestled (in the Team District) and felt pretty good, so I said, ‘All right, we’ll wrestle you in (Individual) Districts. I was worried, because I didn’t want to have another kid have to sit out, then take him all the way up to Gaylord and enter him into Districts and him not be able to wrestle.”

Tristan entered the District with a 10-2 record. He also entered at 189, despite having wrestled at 171 earlier in the season. He weighed around 180 pounds, and Tony Vance didn’t think adding a large weight cut to the stress already on Tristan’s body was a good idea. The bump didn’t bother Tristan, who was second in the District and first at the Regional.

He entered the Individual Finals as the No. 2 seed. But thanks to having wrestled so few matches, and the presence of undefeated Central Michigan recruit John Shelton of East Grand Rapids on the other half of the bracket, Tristan came in under the radar.

“I had a problem with that last season, where I kind of got in my head a little bit and too full of myself, which really affected me,” he said. “Coming in as an underdog – it wasn’t the most fun way for my last season to be, but it really helped with my mentality coming into the tournament.”

Tristan won handily in his first two matches before running into Fruitport’s Crue Cooper in the semifinals. Cooper was considered by many to be Shelton’s main competition heading into the Finals, but Tristan came away with the 3-1 overtime victory.

“I really wasn’t getting too excited about anything, to be honest,” Tony Vance said of his mindset coming into the tournament. “Me and my wife were just happy that he was able to wrestle again. He won a huge match in the semis. As the match was going, I was like, ‘Man. OK, he’s really looking good.’ After that match was done, I was excited. I thought, whatever happens from here, he’s made a good run. I wasn’t thinking that he was going to win it, I was just thinking that we’d see where it goes (Saturday), and I’ll be able to tell how he’s doing at the end of the first period.”

Tristan was calm as he entered his match against Shelton, even after he was informed right beforehand of Shelton’s credentials.

“I have never wrestled him before, and I have never seen him wrestle before because he’s on the west side of the state,” Tristan said. “My plan was mostly just to get to my tie-ups, get to my offense and do what I do best instead of waiting on what he can do.”

The match was tied at 3 after one period, and Tristan was able to take a 4-3 lead with an escape in the second. In the third period, Shelton chose down, and Tristan built an 8-4 lead thanks to a nearfall and a takedown. An escape and a stalling point put Shelton out of striking distance again, and he threw Tristan in a headlock as the clock was winding down. Tristan was able to get to his stomach, though, preventing the takedown or any back points.

“He has ice in his veins,” Tony Vance said. “He doesn’t have any doubt in himself, but he doesn’t show any emotion. He’s just calm and cool.”

After what could be his final competitive match – Tristan said he’s undecided about his future – he was congratulated by a host of spectators just off the mat, including his teammates and coaches from other schools.

Excited but sore, Tristan calmly walked through it all, not yet fully cognizant of the degree of his remarkable achievement.

“I had a lot of emotions through that time, and I wasn’t really thinking about (going through the injury) too much,” Tristan said. “I was just thinking about what had just happened. Now I’ve realized that I kind of accomplished a lot given my circumstances this year.”