DETROIT – Brandon Whitman and Jarrett Trombley will both be headed to the state of North Carolina this fall.

Before leaving, however, they put on one more show Saturday night for wrestling fans at the MHSAA Individual Championships.

“It’s a great feeling,” said Whitman, who will wrestle at the University of North Carolina next year. “Ever since you were little you were watching some of these (four-time state champions). I watched Lincoln Olson (Davison) and I watched Ben Freeman (Walled Lake Central) last year, I was on a bunch of teams with Ben, so it was nice to be up there with those people and know that your work was paying off.”

Whitman (47-0) defeated Richmond senior Colton McKiernan (40-3) at 215 pounds 6-0 in a rematch of last season’s 189-pound final. He also won at 189 as a sophomore and 171 as a freshman, and accumulated 202 victories in his Dundee career, adding two Team Finals championships as well.

On the weekend, Whitman was dominant, winning by forfeit in his first match before pinning his quarterfinal and semifinal opponents in 20 and 7 seconds, respectively.

“It just shows that the work I put in is more than the people that I compete with,” Whitman said. “I put in hours upon hours of work, and it shows. When you put in the work, good things will come.” 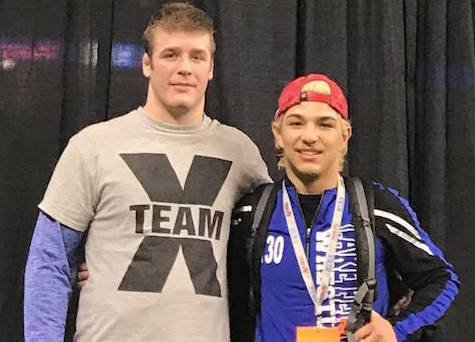 Trombley (59-0), who is headed to North Carolina State, was dominant as well at 130 pounds, winning by technical fall in each of his first three matches before defeating Dundee sophomore Christian Killion (34-9) 8-2 in the title match.

“It’s just amazing to get this accomplishment and be here with my friends and family and just celebrate,” he said. “Not many people have been here before.”

Trombley won titles at 112, 119 and 130 pounds his previous three seasons, and admitted there were some nerves before he headed out on the mat.

“I tried not to (put pressure on himself) but toward the start time of my match, I got a little bit more nervous and more nervous,” he said. “But it was definitely all worth it now.”

Assenmacher said he’d been waiting for his MHSAA championship moment since he first stepped on a mat at 4 years old.

A year ago, he came up one match short. This year, however, nothing was able to slow him down as he rolled to an unbeaten season.

“I’m just so thankful for everybody who pushed me through the season and helped me get to where I am right now,” said Assenmacher, who jumped out to a 5-0 lead in the first period.

“I knew I had to keep pushing the pace, but I didn’t want to give up something stupid, so I just kind of played it safe but made sure I wasn’t taking anything off of him.”

With two titles in two seasons, Spidle knows the four-timer talk is going to start following him around. But he’s not ready to focus on that quite yet.

Last year’s 103-pound champion jumped out to an early lead against Swiderski, and had a confident look on his face following a big move in the first period.

“I think the turning point was when I took him down and got back points,” Spidle said. “I felt pretty good throughout the match, but that really gave me a huge confidence booster.”

After helping Alma reach the Team Quarterfinals for the first time in school history, Castillo came up with some more history in the individual tournament, claiming the Panthers’ first title since 1993.

“It means that it doesn’t matter how big your school is or how small your school is, if you come out here to wrestle and work for it, you can come out here and win,” Castillo said. “I think now that we’ve shown everybody that we’re here to wrestle and we’re coming up big and bringing up a lot of people, it shows them they have a chance and makes them want work harder every day in practice.”

Castillo took a 3-2 lead late in the match, and held off a late headlock attempt by Schaaf.

After finishing off his third championship and a marvelous high school career, one could forgive Greer for taking some extra time behind the mat following his 9-2 win against Wallis.

“Right now, I’m just resting,” he said. “Trying to get my breath, trying to take it all in.”

“It was just a matter of figuring him out,” Greer said. “He was more of a defensive wrestler that was staying away from me, so it was more of just once I kind of figured it out and felt comfortable out there, I was in control for sure.”

On the night his teammate won a fourth Finals title, Buell took his first step toward accomplishing the feat as well.

“Brandon (Whitman) just told me don’t wrestle the crowd, just wrestle the opponent,” Buell said of the pre-match advice he received. “‘You’re not facing the crowd, you’re facing your opponent. And just have fun. Be thankful.’”

Buell took control of the match with near-fall points in the second period.

“I felt more comfortable, but I probably should have attacked more,” Buell said. “Just to separate the match and let him know that I’m the best in the state right now.”

For 5 minutes and 58 seconds, Breece couldn’t break through Felt’s defense. But in those final seconds, the Birch Run senior saw an opening and took it.

“I knew I was running out of time, and I just had to score,” Breece said. “He put himself in a bad position and I capitalized. As soon as I got that lock locked up and I was ready for it, he just made a mistake and I caught it.”

Breece’s late takedown finished off a strong career that, up until Saturday night, was missing one key piece.

“I’ve been a contender for a couple years now,” he said. “And it feels great to finally get what was coming my way.”

Alex Roberts doesn’t give up many points, so when a five-point move opened some breathing room for him, he knew the title was his to lose.

“I felt comfortable,” Roberts said. “I know that I’m hard to score on, and if I was going to give up anything, it wouldn’t be enough for him.”

Roberts finished sixth a year ago and fourth as a sophomore. After Saturday’s win, his post-match emotion was palpable.

“I can’t even describe it,” he said. “I wanted to be a state champ since I was a little kid, and finally the hard work paid off.”

Daniels didn’t have the opportunity to stop Bellaire from winning the 140-pound title a year ago, but he was still plenty motivated to take on the guy who took home the bracket he wanted in 2017.

“He won my chart last year, so there was a little bit of vengeance there,” Daniels said. “I knew the match would be won on our feet, and apparently it was.”

Daniels took advantage of a Bellaire shot attempt, catching the returning champion and taking him to his back late in the second period where he finished off the match with a pin.

“It felt great,” Daniels said. “There’s nothing like it. You don’t even think about it until it’s over.”

Nevadomski made a B-line to the Lake Fenton cheering section to celebrate with his family after claiming his first championship.

“They’ve done everything for me to get to this point – parents, coaches and friends,” Nevadomski said. “I just figured they should be the first to celebrate for me.”

Nevadomski had defeated Orrison, the 2017 145-pound champion, in the Regional Final two weeks ago, and took some notes while he did, which led to the second-period pin.

“When I was on top I got a couple wings in, so I knew if I could get on top and get those wings in, then I just needed to switch them up a little, so we worked on that in practice the last couple weeks,” he said. “We worked on running the chicken wing and coming over with a half. I guess it worked out for me.”

Guilford said there wasn’t a special strategy heading into his title match. But when you’ve had as much success as he has this season, it’s best to not stray too much from what’s worked.

“Just trust your training,” Guilford said. “That’s what Coach has instilled in me. We knew we could win that match, so just trusted our training, stuck together and pulled it off in the end.”

Guilford had a big lead heading into the final period, and remained calm to claim his school’s first title since 2000.

“Maybe if anything, stay cautious, don’t try anything stupid,” he said. “It only takes one move to lose in wrestling.”

Weatherspoon hasn’t been in many tight matches this season, but when he found himself in a dogfight against Cook on the state’s biggest stage, he dug deep enough to pull out the win.

“It was just all in my head for a second,” Weatherspoon said. “Being in a big championship match, you just have to relax. That’s what I started to do, and that’s when I started getting my rhythm.”

Weatherspoon was able to get a takedown early in the sudden-victory overtime, but Cook led early, putting a scare into the unbeaten wrestler.

Marino was one match short of his championship goal a year ago, but the motivation that created helped push him over the top in his final season.

“It feels great, coming from being second last year to winning it this year; it’s all I’ve been training for and it feels amazing,” Marino said. “You just have to make yourself calm before the match. I just listen to music, keep myself calm and do what I do.”

Marino won four low-scoring matches on the weekend, something he’s excelled at all year.

“I’m always attacking and trying to draw the stalling calls,” he said. “I do active stalling. Active stalling is a huge part of wrestling. You’re moving, but you’re really not trying to score, you’re just showing the ref that you’re doing what you’ve got to do.”