Bruce Bittenbender’s impact on the sport of wrestling in Michigan is immeasurable.

And the fact that he’ll no longer occupy a chair next to the mats at Stevensville Lakeshore High School is almost unfathomable after a legendary 52-year career there.

His list of accomplishments over that span is staggering, though the incalculable number of lives he touched — a realization that came from the outpouring of messages from his former student-athletes following his retirement announcement in late March — is what Bittenbender believes is the most important part of his legacy.

“It is absolutely heartwarming,” Bittenbender said at his retirement press conference April 1. “In many cases (some students) are on the edge. I had a guy say to me yesterday, ‘Coach, I didn’t have a father. I want to thank you.’

“How many state titles is that worth? There is a lot of that I appreciate.”

What can be quantified are the competition results during his tenure.

“There are no shortcuts to being successful,” Lakeshore athletic director Greg Younger said. “Coach is always here. He’s probably here more than most teachers (although he retired in 2010). He is in the building early and often. He’s scrubbing the mats. I know it doesn’t magically happen. He’s always here preparing for a match and doing something here, talking to kids in the halls and building those relationships.

“He’s been a testament to hard work and what it takes to really have a goal all the time. When he steps into the wrestling room he’s always prepared, he’s always planning for tomorrow and he’s always planned for what’s coming up next. Nothing has ever surprised him.” 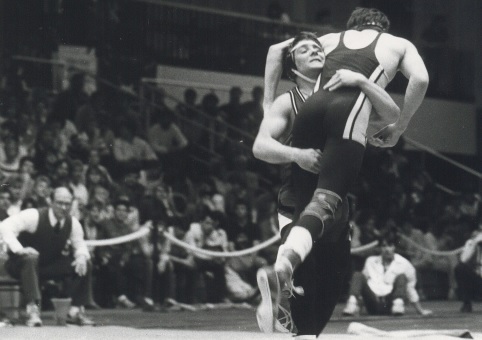 There were a total of 26 Individual Finals champions and 116 state placers under his watch, with Micah Hanau (also a winner in 2020), Zamuel Thompson and Aaron Lucio the most recent to have stood atop the podium and celebrate championships with Bittenbender last month at Ford Field.

“We went through three years of pulling teeth and hard work,” said Bittenbender, who took over at struggling Lakeshore in 1970. “Finally, we hit pay dirt. We got a kid to be state champion (in 1974), Ricky McGrath. This guy opened it up. After that, kids wanted to be Lakeshore wrestlers.”

But there were thousands of others that also laid bricks over the years to help build the program up to where it is today.

Ryan Quinn takes over the program after serving as assistant coach.

“I’m incredibly blessed, grateful and humbled to be part of this school, to be taking over the reins of such a successful wrestling program,” Quinn said. “It is truly an honor to succeed Coach Bittenbender. He has made such a lasting impression on my life in such a short period of time. I know with confidence he has made lasting impacts on all who are involved in his as well. His fingerprints will forever remain on this school district and wrestling program.”

Bittenbender thanked his family, all the parents, volunteers and sponsors that supported the program over the last 52 years.

“I want to thank my family over the years. If you’re going to be a wrestling coach’s wife, you’ve got to be something special. We’re going to spend a lot more time together.”