EAST LANSING – Traverse City Francis relied primarily on a two-headed monster to get it to the Division 3 Semifinals this season.

But once there, another formidable force emerged for the Gladiators.

The dynamic duo all season has been junior ace Charlie Peterson and senior catcher Aidan Schmuckal, and those two delivered again for St. Francis in a 5-4 win over Richmond at McLane Stadium.

Schmuckal went 2-for-3 with two RBI, while Peterson allowed one run in 4 1/3 innings pitched despite laboring at the end and being taken out in the fifth after throwing 109 pitches.

But that’s where the third hero of the day entered for St. Francis.

Senior Jack Hitchens entered for Peterson in the fifth and settled the game down, tossing 2 2/3 innings of scoreless to relief to help lock down the game for the Gladiators.

“Just hitting your spots and throwing strikes,” Hitchens said of what made his outing effective. “Hit the outside corner, and it’s really hard for high school athletes to hit that.”

St. Francis advanced to the Final for the first time since 2017, when it finished runner-up to Madison Heights Bishop Foley.

“We made uncharacteristic errors, but the kids just battled,” head coach Tom Passinault said. “Charlie’s pitch count went a lot higher and quicker than we thought. Jack Hitchens just did a tremendous job against a really good team.”

Richmond (30-6) likely will lament missed opportunities, as the Blue Devils left 10 runners on base and couldn’t score with the bases loaded and nobody out in the fourth inning.

“All year long, we were able to get that key hit,” Richmond head coach Scott Evans said. “Whether it was pressure or heat, we couldn’t. Give their guys credit.”

St. Francis opened the scoring in the first when Cody Richards hit an RBI single to score Schmuckal, who had reached on a walk and took second on a sacrifice bunt.

St. Francis added two more runs in the second inning, loading the bases and then taking a 3-0 lead on an opposite-field two-run double down the right field line by Schmuckal.

Hitchens then made it 4-0 St. Francis on an RBI groundout to second base.

Richmond answered in the third inning, taking advantage of a two-out error by St. Francis and cutting its deficit to 4-1 on an RBI single by Hudson Davenport.

Richmond had its golden opportunity in the fourth inning when it loaded the bases with nobody out, but Peterson struck out Richmond’s first three hitters in the lineup to get out of the jam.

The Blue Devils did strike in the fifth inning, scoring three runs to tie the game at 4-4. The big blow was a two-run double to the wall in left-center by Jackson Jones.

St. Francis responded in its half of the fifth, taking a 5-4 lead on a single by Josh Groves.

“They just don’t know when to be nervous,” Passinault said of his team. “They just play even-keel.”

The final Semifinal of the day was the quickest, mainly because it was a terrific pitchers duel between Liggett junior Kurt Barr and Buchanan junior Matt Hoover.

Barr was just a bit better, tossing a two-hit shutout to lead Liggett to a 2-0 victory over Buchanan and its second-straight trip to the Division 3 Final. 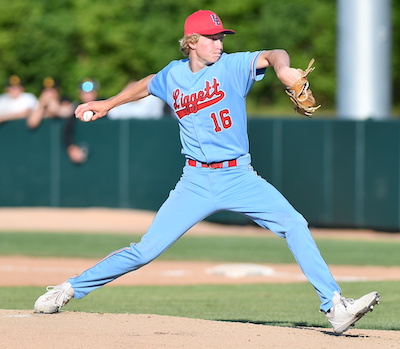 “I’ve been going with my slider all season, but today my curveball was going in the pen,” Barr said. “From the second inning on, I only threw the curveball and ditched the slider. The slider has been the pitch I’ve been rolling with all season.”

Liggett, which lost to Homer in the 2019 championship game, will play Traverse City St. Francis.

“Everything clicked,” Liggett head coach Dan Cimini said. “When you get this far, you know you are going to run into pitching like that, and you have to be able to combat that. You combine that by having great pitching with it and great defense.”

Liggett (30-5) scored the only two runs of the game in the top of the first inning, the first coming on an RBI single by Matt Greene.

The next came courtesy of Ryan Jones, who doubled down the right field line to make it 2-0 Liggett.

That was more than enough support for Barr, who struck out nine and walked just one.

Barr did run into a bit of trouble in the fourth inning, when Buchanan put runners on second and third with two outs.

But Barr induced a groundout to end the threat.

Hoover was stellar as well, tossing a three-hitter, striking out five and walking five.

“I’m proud of the way the boys competed,” Buchanan head coach Jim Brawley said. “This is a working group. … These kids came to work every day, and I’m proud of them for that.”