Seven early runs helped propel the Irish to an 11-1 six-inning win over Marlette in a Division 4 Semifinal at Michigan State’s McLane Stadium.

Shea threw only 23 pitches in the first inning, as he was quickly replaced by Alex Blasen.

“It did work out for us,” first-year Hackett coach Smiley Verduzco said. “The whole idea as we talked about before was that first inning. If we get close to 10 (runs) then you have a chance, and without that you don’t have a chance to do that because you have to win the game. There is no tomorrow.

“Sam was pitching fantastic, and then Alex came in and just shut them down. He did a great job.”

Blasen allowed only one run on two hits over the final five innings. He struck out four and walked four.

The fifth-ranked Irish (30-9) tallied those seven early runs on only two hits. They were aided by an error and walks.

After a leadoff triple by Steven Widger, who had a game-high three hits, and a pair of walks, Brenden Collins drove in a pair of runs with a single.

“We like to score a lot of runs, and when we came out and got that seven it was huge for momentum,” Collins said. “We knew it was crucial to get them down early so that we could roll over them and get to the win.”

Said Verduzco: “Did you see the energy (after the triple)? It just pumps the kids up, and let’s go. Then things started to happen. It was pretty fun to watch, and they have earned it. They’ve worked hard all year, and to get a win against a good team, it doesn’t get any better than that.”

Marlette’s starter didn't get out of the first inning after walking four and hitting a batter.

“The first inning was a killer; that was very disappointing,” said Marlette coach Dave Hayden, whose team was making its first appearance in the Semifinals.

“We knew after that first inning that it would be very difficult to come back on them. I thought we settled down after that, but the first inning kind of did us in.”

The Irish added two more runs in the third inning. Widger ripped an RBI single and then scored on a wild pitch.

The Red Raiders scored in the top of the fourth on a sacrifice fly by Aaron Bower. He brought home Cody Hayden, who was hit by a pitch to lead off the inning.

Hackett ended the game in the sixth after a pair of singles and a ground out scored a pair of runs.

“We worked hard to get our school here for the first time, and now everyone is watching you,” Collins said. “It’s kind of cool that we can put our school on the map like that.”

The Cardinals scored in bunches early en route to a 12-2 five-inning victory over Maple City Glen Lake in the second Division 4 Semifinal.

Mooney (28-6), which will face Hackett in the Final, has outscored its six postseason opponents by a combined 71-8. 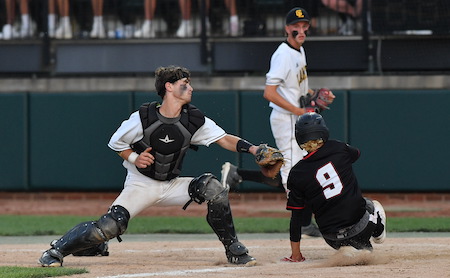 “It’s let's get out in front and never let go,” said Cardinals sophomore Blake Lutzky, who went 2-for-3 with four RBI and a run scored. “Never let off the gas.”

Mooney jumped out to a comfortable lead by scoring four runs in the second inning and adding another three in the following inning.

That was just the cushion starting pitcher Thomas Gill needed as he went the distance and scattered five hits while recording five strikeouts.

“When Tommy Gill, our senior pitcher, gets a run or two, it seems like seven runs,” Mooney coach Mike Rice said. “And in these types of games, I want to get seven or eight runs, but when he’s on the mound and throws first-pitch strikes and with our defense, it makes us unstoppable.”

Rice has been pleased with his team’s approach at the plate, as well as its ability to produce timely hitting.

“We’re hitting, and we’re focusing on hitting strikes and not swinging at bad pitches,” Rice said. “The pitcher’s goal is to throw the ball over the plate, and when he does we’re raking it.”

The early deficit was too much for eighth-ranked Glen Lake (27-8) to overcome.

“You can't fall behind against a team like that because they are too good,” Glen Lake coach Kris Herman said. “They are ranked No. 2 in the state for a reason. If you dig yourself in a hole like that, then you have to fight your way out of it.

“I was proud of our fight. I thought they kept grinding, and we just ran into a better team.”

Glen Lake’s fight came in the fifth when they trimmed the deficit to 7-2.

However, in the bottom of the inning, Mooney countered with five runs of its own to end the game.

“We let go a little bit, and we thought we had the game in the bag,” Lutzky said. “But they scored two, and we just put them back on the board. There’s a lot of positive energy on this team, and we’re ready to play all the time.”