“We knew that we needed a couple more runs to put it away quickly, so we were really aggressive that inning and we came out and put the ball in play,” Greene said. “I just saw a fastball and rocked it, and it was great. I got up at third and he gave me a hug and said, ‘This is it, we’re state champs.’ We just needed three more outs, so it was an awesome experience.”

It was Green’s second big hit of the game. He also doubled in the fourth inning to drive in a pair of runs.

He finished the day 2-for-4 with five RBI.

“He’s a great natural hitter, and he's been like that for us all year,” Cimini said. “The double was gigantic, and the triple just iced it. We needed that.”

The second-ranked Knights (31-5) claimed the program’s sixth Finals championship, but first since 2016.

They finished runners-up in 2019, but entered this year with only two senior starters. 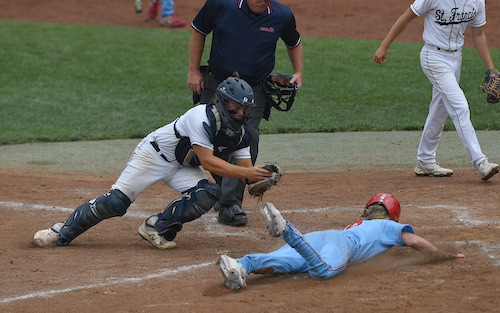 “We were so confident the entire year, and we just really wanted this one for our coach and for our team,” Greene said.

He struck out six and didn’t allow a walk.

“I knew that Jack was going to throw a good game, but we just had to make sure we did our job and score runs,” Cimini said. “He pounded the strike zone and kept us in it. He gave us an opportunity to score runs.”

The Knights led 3-0 in the third inning before a 48-minute rain delay.

They didn’t let up after the halt, scoring five runs in the fourth inning and four more in the fifth.

“I told our team that we have got to continue to score runs, and we did that,” Cimini said. “We left no doubt.”

The Gladiators (28-10), who also finished runners-up in 2017, mustered only three hits and committed four errors.

“It doesn't matter what you do in the field if you can’t score runs,” St. Francis coach Tom Passinault said. “We really struggled with their pitcher. He had real good command of his curveball, and he was spotting his fastball. He kind of had us in knots.

“We went as far as we could, and that’s a darn good team that beat us.”

The Knights finished with 11 hits and were led by freshman Preston Barr’s 3-for-3 performance.

Freshman Reginald Sharpe went 2-for-2 with three RBI and two runs scored, while sophomore Jarren Purify also had a pair of hits.

“That pressure, mixed in with our big hits and Jack throwing a great game, was the recipe for a championship, and we got it today."

PHOTOS: (Top) University Liggett piles onto the pitcher’s mound after clinching the Division 3 title Saturday. (Middle) St. Francis catcher Aidan Schmuckal tries to get a tag down as a Liggett runner dives for the plate.