EAST LANSING – For the final time during his high school career, the Brock Porter show did not disappoint.

There was a lot of anticipation for the second Division 1 Baseball Semifinal between Orchard Lake St. Mary’s and Grand Rapids Forest Hills Northern on Friday. Casual baseball fans, other teams, and of course professional scouts were in attendance at McLane Stadium to get a look at Porter, a senior pitcher for St. Mary’s and possible first-round pick in this summer’s Major League Baseball Draft.

In his final high school appearance, Porter tossed a no-hitter to help lead the Eaglets to a 9-0 win.

St. Mary’s (43-0), which won the last two Division 2 championships before moving into Division 1 this year, tied a state record for most wins in a season, and will look to set the record and finish this spring unbeaten in Saturday’s Final against Grosse Pointe North.

Porter didn’t blow away Forest Hills Northern (24-12) with strikeouts like he has so many other opponents this year, recording only six. But he walked just two and didn’t allow much hard contact.

“I kind of knew it was coming along once I was pitching a little bit,” said Porter, who has committed to play in college for Clemson, pending his draft situation. “I was just trying to go out there and give everything for my team.”

St. Mary’s opened the scoring with two runs in the first inning when senior Jack Crighton stole home on a double-steal play and senior Ike Irish hit an RBI single up the middle.

The Eaglets tacked on another run in the second inning on an RBI single by Crighton to make it 3-0 before delivering a crushing blow in the fourth.

With the bases loaded and two outs, senior Nolan Schubart blasted a grand slam over the fence in right field to give the Eaglets a 7-0 lead.

St. Mary’s added a single run in the sixth inning to round out the scoring.

Scubart, Crighton and Irish all finished with two hits to lead an eight-hit attack for the Eaglets.

Forest Hills Northern coach John Dolce praised his players for getting the program to the state’s final four for the first time. But Porter was just too much.

“Obviously he’s an incredible pitcher,” Dolce said. “He gets every pitch across. He’s a competitor, and we just ran into an incredible baseball team today. I told our players

it’s not life and death and to just enjoy the experience. We enjoyed the opportunity.”

North coach Kevin Shubnell said his team lost the coin flip that determined whether it would be home or away for the first Division 1 Semifinal against Lakeview, but he wasn’t all that disappointed.

“Our philosophy the whole tournament has been to be the visiting team,” Shubnell said. “We’ve won the toss a few times and chosen to be visitors because we felt like our lineup could put up  a run or two and give our starting pitcher a little cushion.” 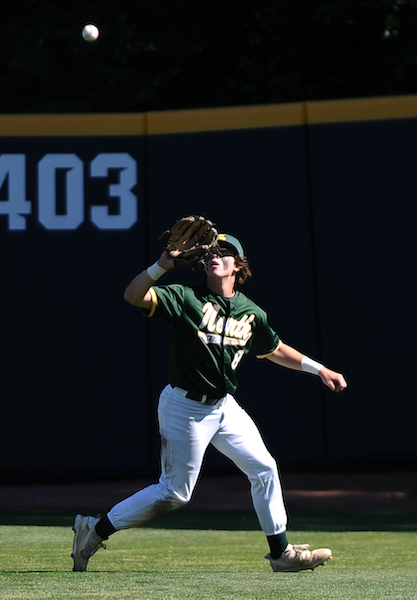 The Norsemen did just that, scoring two runs in the first inning and five runs in the second to jump out to a big early lead.

Grosse Pointe North (23-7) advanced to its first Final since winning it all in 2006.

After getting staked to a big lead, North junior ace Jordan Arseneau – who entered having allowed just one earned run all year – was able to pitch relaxed the whole game.

“It puts a lot of pressure off of me,” Arseneau said. “It puts me into a good mindset that I just have to do my game, throw the ball over the plate and let my defense make plays.”

Arseneau finished with a five-hit shutout, striking out five and walking two.

Grosse Pointe North loaded the bases with nobody out in the first inning on two walks and a hit batter, and then made it 1-0 when senior Luke Babcock walked with the bases loaded.

North then took a 2-0 lead on a sacrifice fly by sophomore Brennan Hill.

The Norsemen took advantage of more Lakeview pitching miscue in the second inning, taking a 4-0 lead on a passed ball and a bases-loaded walk to senior Jake Tedesco.

Babcock drove in another run on a fielder’s choice to make it 5-0, a lead which grew to 7-0 following a sacrifice fly by Hill and an RBI single by senior Bryan Carney.

Grosse Pointe North added another run in the fourth inning on another bases-loaded walk.

“We didn’t play terrible, but we didn’t play great,” Lakeview coach Kyle Kracht said. “It was a tough time for us to not play our best baseball, but these kids have nothing to hang their (heads) on. They did a great job and had a great season.”