Woodhaven, which had never won a District baseball title before this spring, defeated perennial powerhouse Birmingham Brother Rice 7-3 in a MHSAA Division 1 Semifinal on Thursday at McLane Stadium on Michigan State’s campus.

Colin Czajkowski’s two-run homer broke a 1-1 tie in the third inning, and senior lefthander Drew Szczepaniak allowed five hits in 6 2/3 innings and survived a bases-loaded situation in the top of the fifth to earn the victory.

Woodhaven set a state record earlier this season when it recorded 60 consecutive scoreless innings, which included eight consecutive shutouts. The pitching staff has continued to compete at a high level in the tournament, allowing 12 runs over seven games.

“In a game like this, you have to put (the errors) aside,” Szczepaniak said. “In the end, if you dwell on it, it won’t do you any good. Yes, I had to stay patient.

“Hey, we’re Woodhaven. We hadn’t won a District until this year. Everything is going so fast, and we’re just trying to take it one day at a time.”

Czajkowski agreed. No one expected Woodhaven to be in a Semifinal let alone the Division 1 championship game, so this is all new.

“We just got to keep level-headed,” he said. “That home run, things were definitely different. Definitely, beating a team like Rice is something special.”

Saturday’s Final, for just the second time in Division 1/Class A history, will feature two teams from Wayne County as Woodhaven (34-5) will play Grosse Pointe South (32-12) at 11:30 a.m.

The other time two Wayne County teams played for the title was in 2006, when Grosse Pointe North defeated Detroit U-D Jesuit 7-5.

To Woodhaven coach Corey Farner, it didn’t matter whom his team was playing Thursday. After all, this is Woodhaven. There isn’t anything with which to compare what his team and the community are going through.

“I didn’t care who we played,” Farner said. “They have a storied history. We’re Woodhaven. We’re not supposed to be here.

“That home run was huge. It was a 1-1 game at that time. It’s someone different every game coming through.”

Woodhaven could be without starting catcher Justin Charron in the Final. As he stopped at second base after batting in a run with a double, he slid awkwardly and left the game. Farner confirmed that Charron injured his right ankle, and his status for Saturday is uncertain.

Carson MacDonell replaced Charron, threw out a base runner attempting to steal and had an RBI single.

Like Farner said, it’s a different player each game.

Brother Rice (31-9), attempting to reach its first Final since 2013, used a handful of pitchers. But it seemed that no matter who coach Bob Riker pitched, Woodhaven’s batter were ready.

South scored eight runs in the sixth inning of the first Division 1 Semifinal. Nathan Budziak went all six innings on the mound and allowed three hits, no walks and he struck out seven. He’s pitched three shutouts in his three tournament starts and has struck out a combined 29 hitters. 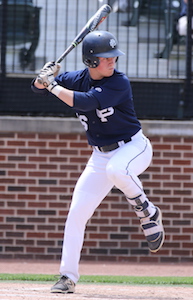 He was in a groove again, and Midland had no answer for him.

“He’s been lights out,” South coach Dan Griesbaum said of Budziak. “Winning 10-0, it’s unreal. We’re hitting over .300 as a team, but we weren’t hitting well early in the season. Maybe it was the weather.”

South had 14 hits paced by Cameron Mallegg with three. Joseph Naporani had three RBI and was one of four players with two hits.

Budziak, and Saturday’s expected starting pitcher, Cameron Shook, both suffered injuries during the season that had each out for a month. Budziak suffered a broken thumb on his left (throwing) hand and returned three weeks ago. Shook suffered a dislocated kneecap and made his first start since his return Tuesday, a 9-1 Quarterfinal victory over Macomb Dakota.

“The other players stepped up after (the two injuries),” Griesbaum said. “It wasn’t just the pitchers. It was a total team effort.”

Saturday’s will be South’s third Final appearance. The Blue Devils won their only title in 2001.