EAST LANSING – The Grand Rapids Catholic Central boys basketball team was heartbroken when it lost in overtime by a single point to Benton Harbor in the 2018 Class B Final.

A second-half push Saturday guaranteed there wouldn't be any stressful final moments this time around at Breslin Center.

The Cougars secured the program’s first MHSAA Finals championship with a 77-54 win over Battle Creek Pennfield in the season's closing game, the Division 2 finale.

Catholic Central finished 20-0 and erased the disappointing memories of three years ago.

“A lot of guys from that (2018) team sent us a lot of messages over the last couple days about finishing what they started,” Cougars coach T.J. Meerman said. “So that was our mission tonight.”

Former Catholic Central star and current Michigan State player Marcus Bingham was in attendance to root his alma mater on.

“This is amazing,” said junior Jack Karasinski, who scored 18 points as one of four Cougars scoring in double figures. 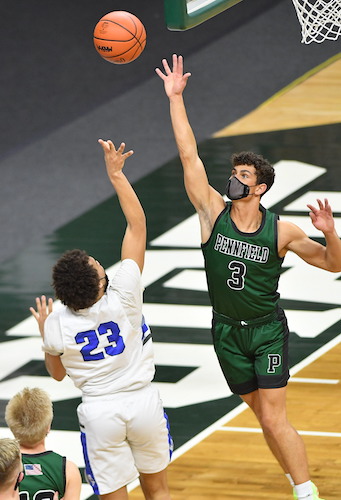 “To see Marcus, and how it ended for him, we just wanted to get it done for our guys. I want to give praise to our coach. Sometimes I don’t think he sleeps. He walks in with an energy drink every day, so he wanted this one bad. I’m glad we got it done for him.”

Sophomore Kaden Brown sparked the Cougars and finished with a game-high 25 points. Freshman Durral Brooks had 10 points and 11 rebounds, while junior Jorden Brooks chipped in 10 points and seven rebounds.

The score was 13-13 at the end of the first quarter, and a pair of free throws from Pennfield’s Aiden Burns with one second left in the second quarter knotted the game again at 31-31.

The Panthers took a 34-33 lead before Catholic Central used its trademark spurt to retake the lead and pull away.

Over a span of four minutes, the Cougars went on a 14-2 run and snared a 48-36 lead they never relinquished.

Pennfield coach Nate Burns, whose team was making its first trip to the Finals, was mindful of Catholic Central’s ability to score in bunches quickly.

“Looking at film on them, they live off of their spurts,” Burns said. “And we knew coming in that we had to try and limit the damage of those spurts. They just happen so fast, and we thought we could withstand it, but then all of a sudden they are up by 10 and you try to regroup and they come with another wave.

“They have been doing that to everyone all year and we were hoping to be the exception tonight, but they got us.”

Junior guard Luke Davis helped the Panthers (21-3) stay close in the first half and finished with 17 points and four assists.

“This group, led by our three captains, did everything they needed to do this season,” Nate Burns said. “This is the best team in school history.”