One of Erik O. Furseth’s favorite moments every March – perhaps the one he looks forward to most – comes during the hour before each MHSAA Basketball Semifinal.

From his familiar seat on press row, Furseth has called hundreds of Michigan State University and MHSAA Finals basketball games.

But the opportunity for high school teams to play at Breslin Center is not lost on him, especially as he watches players and fans enter the arena for the first time.

“(It’s) the kind of awe that overtakes people when they come there,” Furseth explained earlier this month. “The enthusiasm reflected on the kids there and so on.

“What a thrill for those kids to come and play a ballgame there.”

Now imagine Furseth saying this with the voice that’s become legendary to generations of basketball fans across this state.

Furseth, 82, has been a member of the MSU basketball family for more than 60 years. A player first, he since served as the homecourt voice of MSU basketball from 1968-02 and MSU football from 1971-98, and this weekend is continuing a run of calling MHSAA Boys Basketball Finals that began more than four decades ago while those games still were played at Jenison Field House.

Some of his phrases are on ready recall for those who have sat in his audience.

“The clock is correct and official.”

“Heeeee gets the bonus.”

“Erik is able to make that job not just a game, but an event,” St. Francis athletic director Tom Hardy said. “To have somebody of his caliber, with his recognition, in a small gym in Traverse City … whether there are 100 people or it's standing room only, it’s so great to know the professionalism of that is taken care of. He just understands kids.”

Furseth moved from East Lansing to Traverse City 18 years ago. That he would find his way to the microphone in his new hometown makes sense. But that it became the tool of his trade the last half-century certainly would be considered a detour from his original plan when Furseth turned down a chance to play football for Woody Hayes so he could study forestry in East Lansing.

“He was the number one disc jockey in this area before they were called disc jockeys,” said Lansing WILX sports director Tim Staudt, who grew up in East Lansing and has worked in mid-Michigan television for four decades and as a daily radio host for 20 years.

“He has the all-time greatest voice, and obviously it's held up to this day.”

Furseth grew up in Cleveland Heights, Ohio, and got to know Hayes while the soon-to-be-legendary coach was finishing his tenure at Denison University. Hayes hoped Furseth, a high school football standout, would become part of the coach’s first recruiting class after taking the job at Miami (Ohio) before the 1949 season.

But Furseth, who had vacationed in Michigan growing up, was drawn to MSU’s forestry program. So he made a trip to campus – picked up by then-assistant Duffy Daugherty for a visit with head coach Biggie Munn – and was sold on coming to East Lansing instead.

It didn’t take long for his future to turn in an unplanned direction.

Furseth was injured his first fall with the Spartans, and he never played a down of college football. But at that time, MSU sent all freshmen who had played high school basketball a card encouraging them to try out for the Spartans’ freshman hoops team. Furseth, also a 6-foot-3 post player in high school, not only made that MSU team but played three seasons on the varsity under another future coaching legend – Pete Newell, who would go on to lead teams to NCAA and Olympic championships. Furseth played in MSU’s first Big Ten game, against Northwestern in 1951. 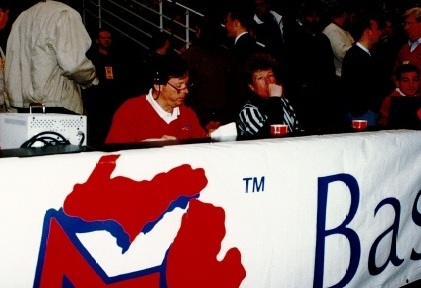 It was during sophomore year that Furseth’s academic future also changed lanes. Forestry students were required to take a soil science class offered only during the winter and from 3-5 p.m. – a conflict with Furseth’s basketball commitments. He dropped the class, dropped the major, and as a junior switched course of study to communications.

MSU basketball’s announcer at that time, Larry Friedmeyer, was among a few who took note of Furseth’s deep and authoritative tone, and suggested he audition for the campus’ WKAR radio station. Furseth was hired at 75 cents an hour to host a few nights each week of “The Concert Call,” a classical music program, and later that year joined local station WILS to read the evening news. After serving in the Air Force, Furseth returned to WILS – and a star was born.

Furseth was a DJ for WILS for 14 years. On Saturdays for a decade, he hosted dances at the Lansing Civic Center that drew 1,000 teenagers a night – and one evening, included a surprise drum performance by a famous student at the local Michigan School for the Blind, known then as Little Stevie Wonder.

Furseth later managed WILS from 1956-68. “Being the manager made it no fun anymore,” Furseth noted.

He left for a job outside of radio. But the fun returned when his announcing career began.

Erik O on the microphone

The “O,” by the way, stands for Olaf. Furseth’s parents are from Norway. “Erik O” was a smooth radio name early in his career when he was filling in for mentor Dave Froh – “Erik O for Dave Froh” – so it stuck.

In his role at a basketball game, Erik O admittedly doesn’t see much of it – at least, as a fan might. He can say his top three MSU players during his time as announcer were Scott Skiles, Magic Johnson and Johnny Green. But for the most part, Furseth focuses on the factual information he must supply with every substitution, foul and break.

He found that winning formula long ago.

“He’s just a nice guy – and nice guys don’t usually last on the air as long,” said Lansing sports radio personality Earle Robinson, who recently retired after 39 years at WKAR. “He’s always had good relationships and such a pleasant personality.”

“You’d never know he was a basketball player or anything. He’s very free of any ego, very helpful to people and generous of his time,” said longtime MSU men’s basketball broadcaster Gus Ganakas, who formerly coached the Spartans from 1969-76 and was an assistant on Furseth’s freshman team.

“And particularly in basketball, he knew what he was doing. He’s a former player and has a background as an athlete, and he has a pleasing voice. I’ve always admired him because of his devotion to what he’s doing.”

Furseth enjoys announcing the seventh and eighth grade football teams that play at Traverse City’s Thurlby Field – “They think they’re big time,” he said – and finds it incredible how much the high school teams can improve over the course of a season.

He relishes the camaraderie he sees at Class C St. Francis, and wishes he’d attended a similarly-small school himself. To a player who was wearing his former number, he said, “You’re wearing my number. Do it right.” And the St. Francis boys basketball team felt at home at Breslin Center in 2012, when it finished runner-up to Flint Beecher while a familiar voice called the action.

Furseth recalled earlier this month. “Really, for me, high school (sports) exemplifies the development of our kids athletically and in many other ways. You learn a lot of things in athletics.”

“When I think about my life, to think something I started led to doing this; I’m thrilled that it happened,” Furseth said of returning to another Finals. “It’s always been a great thrill for me to do it.”