Nothing says the Holidays like a high school basketball tournament.

It started, like many things do, with a drip. Well, make that a dribble.

The Michigan High School Athletic Association has allowed Holiday basketball tournaments for years. When was the first? That’s hard to establish. No one really kept track of such. A 1934 Wakefield News article indicates that a “Christmas Tournament will be held for the (Gogebic) Range teams at Wakefield December 27 and at Ironwood December 28.” Hurley, Bessemer, Ironwood and Wakefield were entered in the “blind” tournament, with opponents drawn just before game time. It was a new idea, at least in the Upper Peninsula.

“Nothing of its kind has ever been attempted in the Peninsula before,” stated the Ironwood Daily Globe. The tournament, won by Hurley, was a financial success. After expenditures, including the purchase of trophies, profit equaled enough that $22.42 was distributed to each school competing in the tournament. Plans were announced to bring back the tournament in a larger format the following year. It did return the following December, with the same teams in the same format but with all games played in Wakefield. This time out, Ironwood topped Hurley 22-21 for the tournament title.

In the Lower Peninsula in 1935, an All-Berrien County Holiday tournament was held Dec. 26, 27 and 28, with Three Oaks winning the Class B-C division title, 15-13 in the final over Berrien Springs. St. Joseph Catholic emerged as the Class D victor with a surprising 27-26 win over the reigning MHSAA state champ from Stevensville. The 14-team competition was played at Niles High School. Attendance was “slim, very slim” for the opening day of the tourney. The event did not return in 1936.

A similar, but much smaller, event was staged in Berrien County in 1941 with the Bridgman Class C Invitational. The tournament featured seven teams with contests spread over three nights. It was a success.

“Some 450 paid admissions were checked in Wednesday night for the championship finals, which Bridgman won from Berrien Springs. … The total paid admission for the three night event was 1,420 fans with a gross gate of approximately $400.”

By the mid-1940s, the idea of playing prep basketball during the Christmas lull had begun to take off across the state.

In December 1946, before a crowd of 1,500 at the Flint IMA Auditorium, Holland, the reigning Class A champion, downed Flint Northern 51-48 behind a pair of late field goals by Ken ‘Fuzz’ Bauman in the first annual Motor City Invitational. In Jackson, Detroit Catholic Central won the Michigan Catholic Invitational, beating Kalamazoo St. Augustine, 42-40. Bridgman again snagged the title at the Sixth Annual Berrien Class C Christmas Holiday Tournament. It was the Bees’ third Christmas championship in four years. The Little Eight Conference Holiday Tournament was played across four school gymnasiums as the calendar transitioned from 1946 to 1947. Bangor downed Covert, 34-29, in the championship contest hosted at Watervliet High School on Saturday, Jan. 4.

“Holiday tournament basketball has really caught on in Michigan,” said Hal Schram in the Detroit Free Press in 1947. “There will be no Christmas-New Year’s rest for at least 60 Michigan high school squads which have jumped at the chance to sharpen their collective shooting eyes for the long season ahead. … At last count, tournaments will be played between Dec 17 and Jan 3 at Flint, Saginaw, Grand Rapids, Jackson, Lincoln Park, Fremont, Negaunee, Marquette, Benton Harbor and Detroit.” 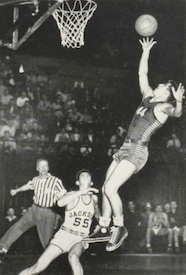 The same eight schools that played at the first Motor City tournament – Jackson, Grand Rapids Central, Holland, Muskegon Heights, Monroe, Midland, Flint Central and Flint Northern – were invited back for the second year. According to Schram, “Not a single participating school of a year ago wanted to be left out.”

The Saginaw Invitational, hosted at Arthur Hill High School, boasted six Class A schools as well as Alma and Mount Pleasant, both Class B schools. Mount Pleasant surprised the field, winning the tournament with a 40-25 triumph over Dearborn Fordson in the championship game.

A year later in December, Schram wrote, “The Michigan High School Athletic Association wasn’t caught unaware when the tournament bug started to bite every sector of the state.”

“Never did we expect such a wave of tournament play as we will see during the next three weeks,” said Charles Forsythe, state director for the MHSAA, noting 34 Christmas vacation tournaments were scheduled between December 15 and January 8 during the 1948-49 basketball season. “Perhaps we’re lucky at that. The Oklahoma association has had to sanction 123 tournaments.”

Forsythe and Schram explained the reasons for the wave of popularity. Of particular interest was the fact that, at the time, a school sponsoring both football and basketball could play a total of no more than 24 games, combined, in the two sports. However, MHSAA rules allowed a basketball team the chance to play as many as three games during a Holiday tournament and be charged with only one of its allotted combination of 24 contests. (The MHSAA rules changed prior to 1972-73 to allow basketball teams a maximum of 20 games.)

Coaches could keep their squads sharp during the two-week layoff with games rather than just mandatory practices. And, as a bonus to all because tournaments were financed through gate admissions, invitations to larger tournaments meant teams got to “stay and eat at the best hostelries, go on sightseeing tours when not playing and play non-conference opponents from other sections of the state.“

Add in the chance to play before larger-than-normal crowds, and the formula for a successful tournament was cast.

Beginning with the 1950-51 season, the football-basketball rule was altered to count play in mid-season invitational tournaments as two contests. With the change, according to the Detroit Times, “the number of such meets dropped sharply.”

But by the 1960s, Holiday Tournaments were again regaining popularity, with more now focused on teams from a specific community or section of the state, especially among smaller schools.

The St. Patrick tournament was still going strong in 1966 – its 15th year – with an eight-team, four-day design. Williamston downed a Cinderella squad from Carson City, 64-44, before 1,100 fans at Portland to earn the championship. Other Mid-Michigan holiday tournaments played out in Chelsea and Swartz Creek at the same time.

The Flint Parochial League Tournament was a mainstay of the Holiday season until the breakup of the league in the early 1970s.

“Basketball tournaments have become popular around the state and nation in recent years,” wrote Wendy Foltz, longtime Battle Creek Enquirer sports editor, before the kickoff of the inaugural Battle Creek Central Holiday Cage Tournament in 1968. In a twist that harkened back to earlier days, the eight-team event represented nearly every section of lower Michigan. “Battle Creek never has been a rabid basketball town like some around the state,” added a hesitant Foltz, noting a hope that the event could at least break even.

Hosted at the Cereal City’s historic Fieldhouse, built in 1928, that first tournament was won by host Battle Creek Central, which downed Traverse City 71-53 before a crowd of 2,000. Phil Todd led the Bearcats with 29 points, including 21 in the first half, while 6-foot-8 Tom Kozelko paced TC with 24. Muskegon Heights won the consolation game, holding off a late Ypsilanti Willow Run rally, 78-77. Other schools competing were Battle Creek Lakeview, Grand Blanc, Romulus and recently-opened Jackson Lumen Christi.

Chuck Turner, Central’s head coach, and junior varsity coach Jack Schils had contacted 60 schools during the summer of 1967 to organize the 12-game schedule.

“The response was terrific,” said Schils, who added, “Many schools could not accept because of schedule commitments but want to enter a year hence.”

The Battle Creek tournament was back in 1969, again hosting teams from near and far. Schils noted that cost ran high when teams were brought in from long distances: “However, this type of tournament is highly desirable so we hope fans will support it.” 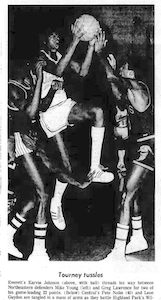 But the event was discontinued following the 1970-71 season when the “eight team format became too unwieldy,” according to the Enquirer “… and both crowd and the quality of play declined.”

Pared down to a four-team format, it returned in a big way in December 1975. The tournament saw standing-room-only crowds of more than 3,000 for games between Battle Creek Central, Detroit Northeastern, Class A quarterfinalist Lansing Everett and reigning Class A champion Highland Park.

By the 1980s, it seemed that the Christmas break nearly mimicked March in Michigan.

“I think a Christmas tournament really helps your program,” said Turner in 1980 to the Enquirer. He had taken over the head coaching position at Battle Creek in the fall of 1967 after a successful stint at Willow Run. “I don’t understand basketball teams having a preseason, playing three or four games, then taking two weeks off. When you get back, it’s like starting over.”

“The late Chuck Turner started bringing big games to the city over the holidays when he first started at the school in the 1960s,” wrote Bill Broderick in the Enquirer in 2018.

“Chuck started this because he wanted to give people the chance to come back home for the holidays and see everyone play. It’s been like a family reunion over the years,” Fred Jones told Broderick. Jones was a longtime assistant to Turner. “That we can keep it going in his name is great and hopefully we can keep if going for another 50 years.”

The girls are now part of the action. All five Battle Creek city schools – Central, Pennfield, Harper Creek, Lakeview, and St. Philip – were part of the event in 2018.

This year the Chuck Turner Central Field House Holiday Classic will again span two days – December 27 and 28 – and will again see all five city schools play on the historic floor.

Other Holiday tournaments scheduled this year include:

PHOTOS: (Top) The Battle Creek Central and Pennfield girls face off during the 50th Chuck Turner Classic. (Middle) Shaheen Shaheen scores two points for Flint Northern, which fell to Jackson 39-34 during the 1947 Motor City championship game. (Below left) Lansing Everett’s Earvin Johnson makes a move toward the basket against Detroit Northeastern during the 1975 Battle Creek event. (Below right) Box scores from the 1975 tournament include Johnson’s 22 points in the 63-58 loss. Photos courtesy of the Battle Creek Enquirer, Lansing State Journal and Ron Pesch archives.)