Instead, the standout junior guard from Holland High School made history with one dramatic shot.

“When they inbounded the ball to me, I was going to try and beat everybody down the floor to get a bucket and go to overtime,” Lake said. “That’s was all I was thinking. Get to the rim. Get to the rim.”

Lake altered his plan when he saw Zeeland West’s defense. He had only one option.

“They came out in a half-court trapping situation to stop me, so I push the ball down the sideline as fast as I can and I look up and there is only two seconds on the clock,” Lake recalled. “So I shoot a 3 behind the arc, and I’m watching it go in as I follow through on my shot. It was like, wow, did that really happen?”

It did happen. A stunning buzzer-beater from the right wing that not only gave the Dutch a come-from-behind victory, but it gave Lake a school-record 50 points.

“Everybody was chasing me, and the place erupted,” Lake said. “Fans were jumping out of the seats and running on the court. It was a crazy atmosphere.”

Lake said the night was memorable for more than one reason.

“It was special in a lot of different ways,” he said. “It was a conference game against a Zeeland West team that played us tough, and breaking the record on a game-winning shot was real special because it was in front of my home crowd. The whole crowd, including the principal, superintendent and the athletic director. They were all there watching me, and it was just big for me and my teammates.”

“He is not afraid to take those kind of shots, so I wasn’t surprised when it went in,” Chapman said. “It was a real tough shot, and he had guys all over him. He was way out by the sideline.

“He scored 50 points, and that overshadowed some other things because he also led us in that game in steals, assists and tied for the lead in rebounds. He played pretty much an all-around great game. He put the exclamation mark on everything with the 3-pointer at the buzzer.”

The 5-foot-11 Lake, who recently turned 17, eclipsed a longstanding school record. Ron Maat owned the previous mark, scoring 49 points during a game in 1960.

Lake had his sights set on the record.

“I knew when I scored my first 40-point game against Cedar Springs that I was aiming for that record because I knew I was going to end up breaking it sometime this season,” Lake said. “It really wasn’t my main focus, but since I was playing middle school basketball one of the goals that I had was breaking records here at Holland High School.

“It’s special for me to have my name up there and in the record books. You have to work for that, and that’s what I did.”

Lake’s heroics helped improve Holland’s record to 6-3 and 2-0 in the conference. Through nine games, he’s averaging an astounding 33.3 points per game, with four games of 40 points or better. 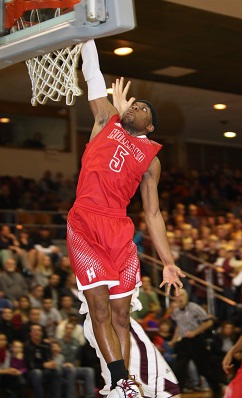 Last season, as a sophomore, Lake averaged 25 points per game and earned a spot on the Class A all-state team. He scored at least 30 points eight times.

While Lake has always possessed the ability to score points at a rapid pace, he improved other facets of his game during the offseason.

“He’s a better ball handler, and that’s one thing he worked on, and he’s shooting a higher percentage,” Chapman said. “He’s been very aggressive with the ball, and he has the ability at times to put us on his back and kind of carry us through.

“He’s also a tremendous competitor. He really wants to win and wants to do well. He’s a fantastic athlete and not afraid to fail. He does a lot for us.”

Lake, who was pulled up to varsity from the junior varsity 11 games into his freshmen season, has seen all types of defenses from opposing teams in an attempt to contain him.

It’s something he anticipated entering the season.

“I worked really hard this summer on being more consistent so I can be aware of teams running different defenses at me,” Lake said. “I really concentrated on my 3-pointers, lay-ups, free throws and getting other players involved. Alumni will come into practice and guard me, and we work on denying me the ball in practice.”

Lake also has stepped into a leadership role.

“He’s a much better leader,” Chapman said. “Last year he was on a senior-dominated team, but now he’s the guy with experience. He’s done a good job at getting guys in the right spots and getting them to compete and believe in themselves.”

Lake has received attention from several colleges including the likes of Purdue, Michigan State, DePaul and Youngstown State.

However, Lake has a wish list of three top programs he hopes to play for in the future.

PHOTOS: (Top) Holland's Demetrius Lake gets to the basket during a game last season against Hudsonville Unity Christian. (Middle) Lake throws down a dunk against Holland Christian. (Photos courtesy of Holland High School.)